The United Kingdom will have another prime minister by the end of July, when members of the Conservative party choose between Jeremy Hunt (who?) and Boris Johnson (yes, really).

Aside from the morbid fascination of watching this from afar, this leadership contest matters because it will determine who will (presumably) lead the UK out of the European Union, with or without a deal.

One way or another, this will affect Australia’s future trade relationship with the UK.

Selecting a leader of the Conservative party (or Tories) used to be easy. As late as 2003, a series of potential candidates would be “sounded out” behind-the-scenes by grandees, including lords and senior MPs, to see if they wanted the honour of leading the party (and, as a happy by-product, the country).

As with all leadership positions, not everyone wanted the job. When the men in suits offered Sir Alec Douglas-Home the honour of being prime minister in 1963, he famously replied: “Please, please not me!”

They ignored him and he went on to become one of the least successful prime ministers in British history.

But the sounding-out process was democratised in 1998 so that the party base could have a say. The process for electing a new leader of the Conservative party is that any or all members of parliament (MPs) can put their hat in the ring. If they gain enough support from fellow parliamentarians, they compete against each other in a series of votes among MPs, until there are only two contenders left standing.

At this point, the party members in the towns and shires (the so-called grassroots members) get to vote on who next becomes leader.

This innovation came at a moment in time when the Conservative membership was becoming highly unrepresentative of the country as a whole. And since the late 1990s, the number of members in the Conservative party is declining, the average age is increasing, and the membership is overwhelmingly white. This has led some people to describe the conservatives as “pale and stale”.

This time round there were 10 runners. The field became “pale, male and stale” when the two female contenders, Esther McVey and Andrea Leadsom, did not gain the required number of votes to progress to the next round.

Eventually we got down to Hunt and Johnson. 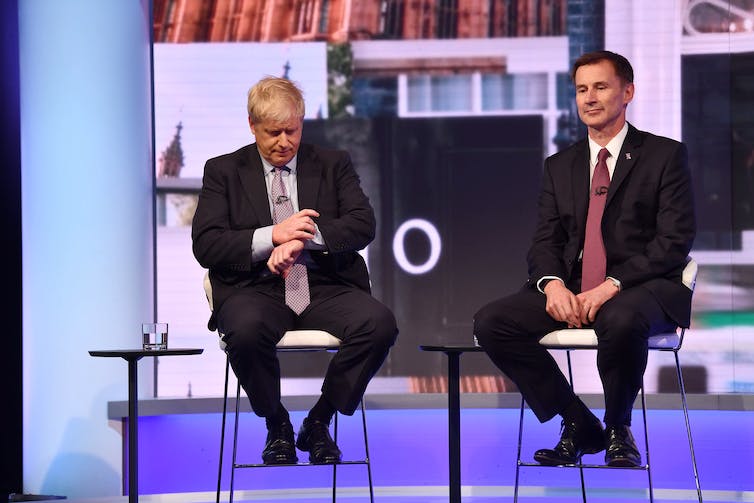 Johnson, the former London mayor and foreign secretary, needs no introduction. Yet, despite a campaign mired in controversy about his personal qualities and his avoidance of most TV debates, Johnson was still in front among party members as of late June.

He may scandalise opinion outside the Conservative party, but the grassroots members still rate him. This is partly because he stands for leaving the EU without a deal on Oct. 31, 2019 – an article of faith among Brexit-supporting Conservatives.

Read more: Why Boris Johnson would be a mistake to succeed Theresa May

In contrast, Hunt, the current foreign secretary, is more measured and presents himself as the more likely of the two candidates to secure a deal with the EU, as Johnson is not taken seriously in Brussels.

What’s working against Hunt, however, is that he voted to “Remain” in the EU in 2016, leading some to call him “Theresa May in trousers”.

Of course, Johnson and Hunt’s respective positions on Brexit matter only so much because no change of leader affects the numbers in parliament. The real question then becomes, will the new leader call – or be forced into – a general election to break the parliamentary deadlock over Brexit?

Read more: Boris Johnson and Jeremy Hunt will compete to become the UK's next prime minister – but could either win an election?

What this means for Brexit

Brexit has radicalised the Tory base, which is broadly in favour of leaving with a no deal (unlike the rest of the country). A no-deal, or hard, Brexit means the UK would leave the EU without any agreements in place to soften the economic shock of leaving its largest trading partner, the EU. This is now Johnson’s stated position.

Underlying this drift towards a hard Brexit is the de-alignment of voters from the two main parties, which has scared the Conservatives. 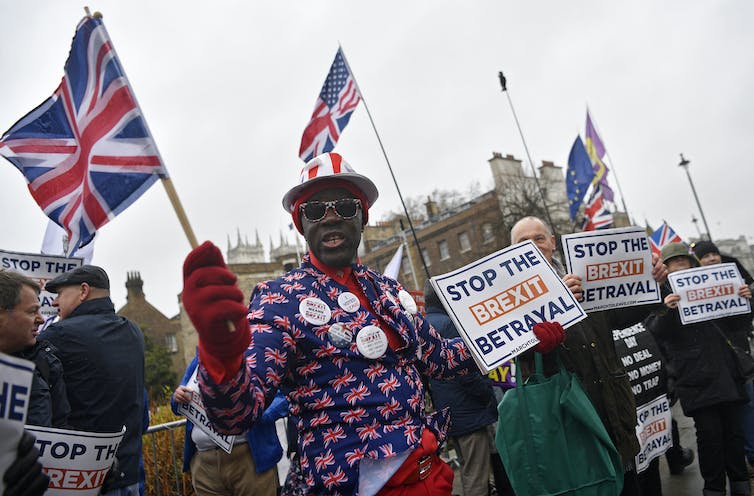 There is growing weight to the idea that Brexit is, essentially, an English nationalism movement. AAP

The success of the Brexit Party and a threat from the resurgent centrist and pro-Remain Liberal Democrats makes these challenging times for party strategists. In fact, the Conservatives are only united in their dislike of Labour leader Jeremy Corbyn.

Significantly, neither leadership contender really understands the multinational United Kingdom or seemingly cares about the strain Brexit is putting on the union.

Neither candidate has an answer to the Northern Ireland “backstop” issue, for instance, which seeks to avoid the reestablishment of a political border between the UK and the Republic of Ireland in Ulster (the source of past conflict). And a hard Brexit will see increased support for independence in Scotland.

What’s more, the results of a recent YouGov survey of Conservative party members and their attitudes toward Brexit added more weight to the idea that Brexit is, essentially, an English nationalism movement.

So, in keeping with the permanent state of political misery induced by Brexit, any outcome of the leadership contest and the subsequent UK-EU politics will make almost everyone unhappy.

Both sides feel like they are losing. This is a result of the referendum format; in an election cycle, you at least think your side might have a chance next time.