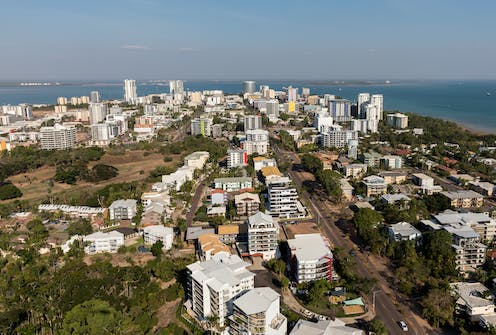 The quake prompted several buildings to be evacuated in central Darwin.Shutterstock.com/sljones

The magnitude 7.3 earthquake that struck at a depth of about 200km beneath the Banda Sea on Monday prompted office buildings to be evacuated in Darwin, some 700km away.

This is a complex and seismically active region, where the Australian tectonic plate...

The magnitude 7.3 earthquake that struck at a depth of about 200km beneath the Banda Sea on Monday prompted office buildings to be evacuated in Darwin, some 700km away.

This is a complex and seismically active region, where the Australian tectonic plate collides with microplates on the edge of Asia in the Indonesian region.

The location of this earthquake is no surprise. Three earthquakes greater than magnitude 6 occurred within a few kilometres of each other and within the same general area in 2016 and 2018. Nor is the size of the quake particularly out of the ordinary. A magnitude 7.1 earthquake struck here in 1962, and a magnitude 7.3 earthquake in 1983. 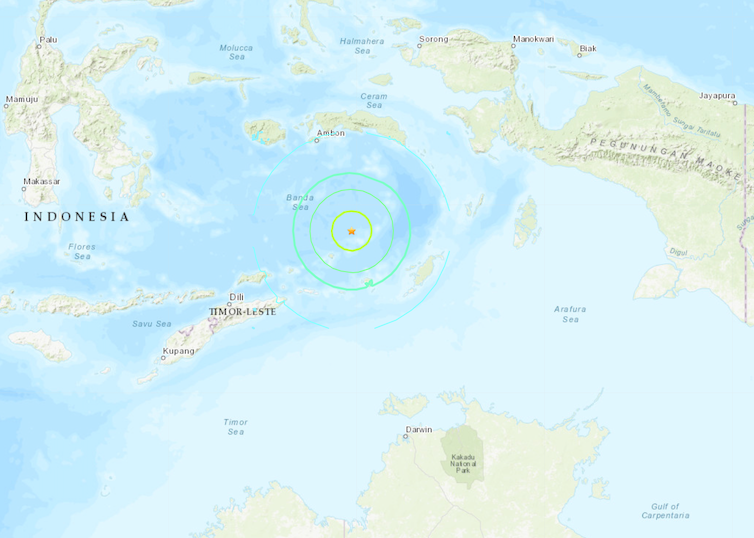 The quake’s epicentre was in the Banda Sea about 700km north of Darwin. US Geological Survey

Why is this zone so active?

Even though this seismic zone is at the boundary between two tectonic plates, these earthquakes occur within the Australian tectonic plate, and owe their character to variations in the type of crust that makes up the northern part of the plate.

Where the Australian Plate collides with Asia, some of it has slid (subducted) under the volcanoes of Eastern Indonesia, and is descending into the mantle. This process is driven by buoyancy (the tendency of material to sink or float). Continental crust is more buoyant, and thus resists sinking into the mantle. Ocean crust, meanwhile, is denser and has more of a tendency to sink. As the Australian Plate travels northward, the front edge is high-density ocean crust, and the part following behind it is lower-density continental crust.

Read more: What a crack up: hefty continents got tectonic plates moving

Where one part of a plate subducts easily and starts to sink and the other wants to float and refuses to subduct, a tear can develop, and this is what we believe is happening north of Darwin. The northern edge of the Australian Plate used to be made up of ocean crust that is now completely subducted. The buoyant Australian continent is refusing to subduct, and as a result the ocean crust is tearing off as it sinks into the mantle.

In the region of Timor this tearing seems to have happened already, so there is virtually no seismicity at similar depths for several hundred kilometres west of this earthquake in the vicinity of Timor. Earthquakes cannot occur where there is a hole in the plate, and instead they mainly happen at the spot where the tear is growing.

A useful analogy to visualise this is tearing a piece of cheese – the kind of pre-sliced, soft cheese that you put on your sandwiches. The picture below shows a piece of cheese that is bent around a cylinder (representing the descent of the plate into the mantle), and is torn along one edge. 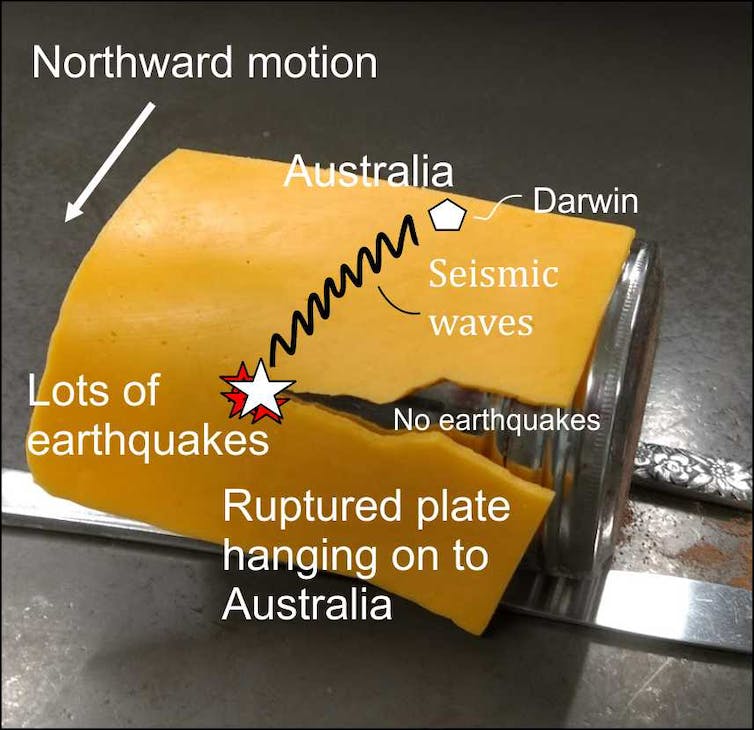 A cheese analogy for the Banda Sea earthquake. The cheese represents the Australian plate, which is bending down as it slides (subducts) under Indonesia and Timor. Brendan Duffy/Mark Quigley, Author provided

The official earthquake record from the US Geological Survey indicates that this earthquake consisted of a combination of lateral displacement and vertical extension (lengthening), which is consistent with our cheese analogy.

The vertical extension is caused by the stretching of the crust while lateral displacement, known as strike slip, probably accommodates the eastward movement required by the continuing attachment of the slab east of the earthquake.

Why did it rock Darwin so hard?

Earthquakes such as this occur within the Australian plate, and the seismic waves travel through the cold, strong Australian plate quite efficiently. This means that it did not lose much of its energy before reaching Darwin.

This is particularly true for long-period (low frequency) waves, which disproportionately affect tall buildings, causing them to move quite violently. This is consistent with news reports that offices in Darwin’s central business district were evacuated and are now being assessed for damage.

In contrast, the city of Dili, which is closer to the earthquake, experienced only minor wobbling for less than 10 seconds, according to Federation University geology lecturer Nicole Cox, who is visiting Dili. Seismic waves emanating from the lower plate have already weakened considerably by the time they pass through the upper plate to reach Dili.

Read more: Why some earthquakes are so deadly

Local earthquakes are relatively infrequent around Darwin, because like the rest of Australia it sits on strong continental crust, relatively far from a plate boundary. However, earthquakes like today’s are quite common. Queensland seismologist Kevin McCue has compiled a long list of earthquakes that affected Darwin, including many from the region of the Banda Sea that produced today’s earthquake. Even in 1900, local people recognised the relative normality of severe Banda Sea earthquakes.

Aftershock sequences from these types of events commonly include a few earthquakes greater than magnitude 6, and ten or more above magnitude 5. The key to managing this hazard is preparedness and carefully considered action in the aftermath of the earthquake.

Now is probably as good a time as any for Territorians and other Australians to re-read the advice of state emergency services on how to be safe when an earthquake strikes, and the best places to take cover.