Australian elections have been won in outer metropolitan and regional electorates, but Labor did badly in swing terms in those types of seats at the May 18 election. In inner metropolitan areas, where Labor had swings in its favour, most seats are safe for one side or the other.

In NSW, the rural seat of Page went from a 2.3% to a 9.5% Nationals margin, and the provincial seat of Robertson from a 1.1% to 4.2% Liberal margin. Even in Victoria, the only state to swing to Labor in two party terms, the outer metropolitan seat of La Trobe, went from a 3.5% to a 4.5% Liberal margin.

Ignoring seats with strong independent challengers like Warringah and Wentworth, the biggest swings to Labor occurred in seats already held by Labor, or safe conservative seats. There was a 6.4% swing to Labor in Julie Bishop’s old seat of Curtin, but the Liberals still hold it by a 14.3% margin. The Liberals hold Higgins by a 3.9% margin despite a 6.1% swing to Labor.

As Labor won 48.5% of the two-party vote at the election, it needs 49.1% to deprive the Coalition of a majority, 51.6% to win more seats than the Coalition, and 52.4% for a Labor majority. Mayo and Warringah were not counted in swings required as they are held by crossbenchers. Warringah is likely to be better for the Liberals in 2022 without Tony Abbott running.

It will be a bit harder for Labor than the 0.6% swing notionally needed to cost the Coalition a majority, as the Liberals now have a sitting member in Chisholm and defeated a Labor member in Bass. The Liberals will thus gain from personal vote effects in both seats.

There will be redistributions before the next election, which are likely to affect margins. But unless Labor improves markedly with the lower-educated, they risk losing the seat count while winning the popular vote at the next election.

Had the polls for this election been about right and Labor had won by 51.0-49.0 (2.5% better than their actual vote), they would have added just three seats – Bass, Chisholm and Boothby – and the Coalition would have had a 74-71 seat lead.

The Electoral Commission will eventually release details of how every minor party’s preferences flowed between Labor and the Coalition nationally and for each state, but this data is not available yet. However, we can make some deductions.

Nationally, Labor won 60.0% of all minor party preferences, down from 64.2% in 2016. This partly reflects the Greens share of all others falling from 44.0% in 2016 to 41.2%, but it also reflects more right-wing preference sources like One Nation and the United Australia Party (UAP). Had preferences from all parties flowed as they did in 2016, Labor would have won 49.2% of the two party vote, 0.7% higher than their actual vote.

In the Senate that sits from July 1, the Coalition will hold 35 of the 76 senators, Labor 26, the Greens nine, One Nation two, Centre Alliance two, and one each for Cory Bernardi and Jacqui Lambie. The final Senate results were the same as in my June 3 preview of the likely Senate outcome.

The table below gives the senators elected for each state at this half-Senate election. A total of 40 of the 76 senators were up for election. The one “Other” senator is Jacqui Lambie in Tasmania. The table has been augmented with a percentage of seats won and a percentage of national Senate votes won at the election. 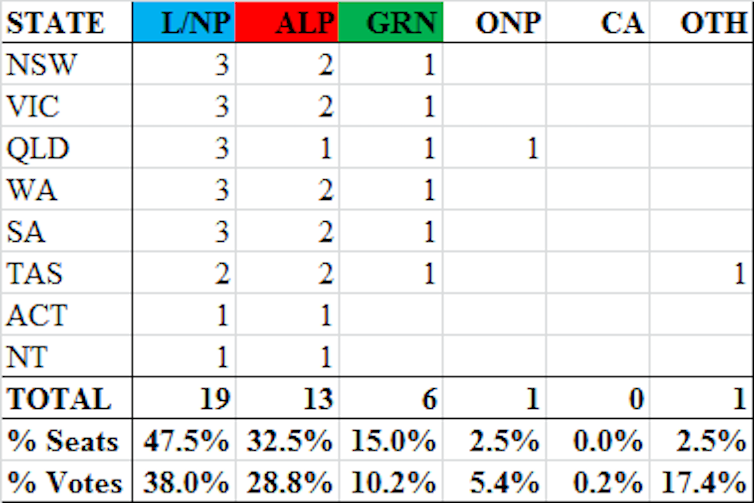 Final Senate results by state in 2019.

The Senate results are not very proportional, but this is mostly a consequence of electing six senators per state. If all 40 senators were elected nationally, the outcome would be far more proportional to vote share.

The Coalition and Greens benefitted from having large fractions of quotas on primary votes, which Labor and One Nation did not have in most states. Lambie was the only “Other” to poll a large fraction of a quota, and so she is the only Other to win.

Changes in Senate seats since the pre-election parliament were Coalition up four, Lambie up one, Labor, Greens and One Nation steady, and the Liberal Democrats, Brian Burston, Derryn Hinch, Tim Storer and Fraser Anning all lost their seats.

Ignoring Bernardi’s defection from the Coalition, changes since the 2016 double-dissolution election were Coalition up six, Labor and Greens steady, One Nation down two, and Family First, Liberal Democrats, Hinch and Centre Alliance all down one.

Senate preference flows for each state

In the Senate, voters are asked to number six boxes above the line or 12 below, though only one above or six below is required for a formal vote. All preferences are now voter-directed.

With six senators to be elected in each state, a quota was one-seventh of the vote, or 14.3%. In no state was there a narrow margin between the sixth elected senator and the next closest candidate. Preference information is sourced from The Poll Bludger for Queensland, Victoria, WA and SA here, for NSW here and for Tasmania here.

In NSW, the Coalition had 2.69 quotas on primary votes, Labor 2.08, the Greens 0.61 and One Nation 0.34. Jim Molan won 2.9% or 0.20 quotas from fourth on the Coalition ticket on below the line votes, but was excluded a long way from the end. The Greens and third Coalition candidate each got almost a quota with One Nation trailing well behind.

In Victoria, the Coalition had 2.51 quotas, Labor 2.17, the Greens 0.74 and One Nation and Hinch both 0.19. Hinch finished seventh ahead of One Nation, but was unable to close on the Coalition, with the third Coalition candidate elected just short of a quota. The Greens crossed quota earlier on Labor preferences.

In Queensland, the LNP had 2.72 quotas, Labor 1.57, One Nation 0.71 and the Greens 0.69. One Nation and the LNP’s third candidate, in that order, crossed quota, and the Greens extended their lead over Labor’s second candidate from 1.8% to 2.7% after preferences.

In WA, the Liberals had 2.86 quotas, Labor 1.93, the Greens 0.82 and One Nation 0.41. The third Liberal, second Labor and Greens passed quota in that order with One Nation well behind. The Liberals beat Labor to quota on Nationals and Shooters preferences.

In Tasmania, the Liberals had 2.20 quotas, Labor 2.14, the Greens 0.87, Lambie 0.62 and One Nation 0.24. Lisa Singh, who won from sixth on Labor’s ticket on below the line votes in 2016, had 5.7% or 0.40 quotas this time in below the line votes. On her exclusion, Labor’s second candidate and Lambie were elected with quotas, well ahead of One Nation; the Greens had crossed quota earlier.

Analyst Kevin Bonham has a detailed review of the Senate system’s performance at this election, after it was introduced before the 2016 election. One thing that should be improved is the issue of preferences for “empty box” groups above the line. Such boxes without a name beside them confused voters, and these groups received far fewer preferences than they would have done with a name.

On June 20, UK Conservative MPs finished winnowing the field of ten leadership candidates down to two. In the final round, Boris Johnson won 160 of the 313 Conservative MPs, Jeremy Hunt 77 and Michael Gove was eliminated with 75 votes.

Johnson and Hunt will now go to the full Conservative membership in a postal ballot expected to conclude by mid-July. Johnson is the heavy favourite to win, and become the next British PM. I will have a fuller report for The Poll Bludger by tomorrow.