In 1890, a columnist for the Queenscliff Sentinel, an early Victorian newspaper, sardonically announced that the raucous noise of barrackers at footy matches was one of the wonders of the world:

What a babel of sound! What a magnificent uproar! What a glorious cloud-shattering eruption of profanity!

Today, the Australian Football League feels quite differently about the unbridled enthusiasm of supporters at games, and in recent weeks, has sought to quell this profane uproar. In a perplexing move that was widely mocked by fans, the league dispatched “Behavioural Awareness Officers” in high-vis vests to patrol venues for barrackers who were being too loud or otherwise offensive.

It was a heavy-handed approach that backfired. On Wednesday, the AFL chief executive, Gillon McLachlan, apologised to

people who are going along to the football to have a day out who feel that they haven’t been able to do that.

Yet, McLachlan was at pains to emphasise that the AFL’s philosophy on crowd behaviour remained unchanged.

We want our fans to come to the footy and be themselves. Equally, we want the men, women and children of our game to feel safe.

The ‘delightful privilege’ of abusing umpires

This issue has been a long-standing dilemma for sport officials as long as Australian rules football and other sports have excited the passions of crowds.

When Australian rules football became a mass-spectator sport in the late 1800s, the game’s fans became infamous for their emotional outbursts during matches. They yelled, stamped, prayed, grieved, and celebrated with gusto.

In Melbourne, the birthplace of Australian rules football, the word “barrack” was coined to describe the way supporters jeered and shouted abuse, especially at umpires.

It was not a compliment. Like other sports fans, the barrackers who started flocking to football matches were pathologised by newspaper columnists. To them, barrackers seemed sick, fevered, even mad. 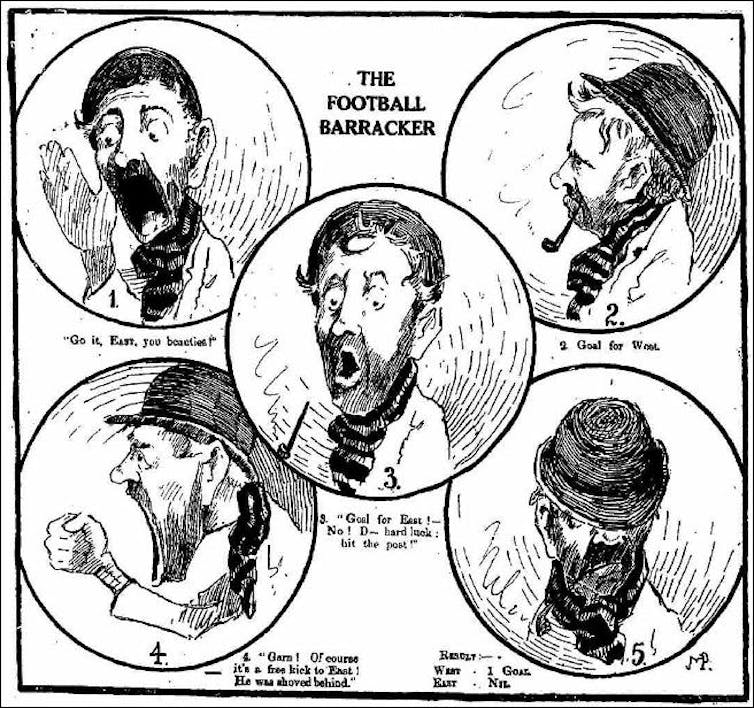 Cartoon from the Melbourne Punch in 1911 depicting the typical football barrackers of the time. National Library of Australia

There were concerns that barrackers threatened the safety of umpires, players and other supporters. But there was also money to be made from such madness. Obsessed fans not only paid to attend games, they consumed everything related to their teams, such as media and merchandise.

Over time, the turbulent emotions of sports fans became more tolerated. In 1888, Victorian Football Association secretary TS Marshall, the most powerful football official of the time, signalled the new public attitude toward barracking when he described it as

the delightful privilege of abusing umpires, and players to the top of his bent.

Soon, to “barrack” would come to mean “support” (albeit loudly and offensively). Yelling remained a central component to barracking throughout the years, as the Collingwood Football Club song made clear from 1906.

For over half a century, the sometimes vitriolic nature of barracking did not overly trouble Australian football officials. But in the 1980s, concern grew over the way many spectators were using the “delightful privilege” of barracking to racially abuse Indigenous players.

Matters came to a head in 1993 when Nicky Winmar lifted his St Kilda jumper and pointed with pride to his dark skin after being vilified by Collingwood supporters.

After initially downplaying the problem, the AFL moved to outlaw racial and religious vilification by both players and fans. Their actions were widely lauded, and AFL administrators believed the problem was largely contained. Some clubs banned barrackers for racist abuse, but overall, the problem didn’t seem as entrenched as the racial vilification of black football players in much of Europe.

In 2015, however, AFL barrackers turned booing into “an act of racial hatred” directed at the Indigenous player Adam Goodes.

Read more: Booing Adam Goodes – racism is in the stitching of the AFL

Goodes, one of the greatest men to play the game, was made to feel unsafe. To their shame, the AFL and most clubs responded defensively, unwilling to call the booing racist. Goodes soon retired from the game. 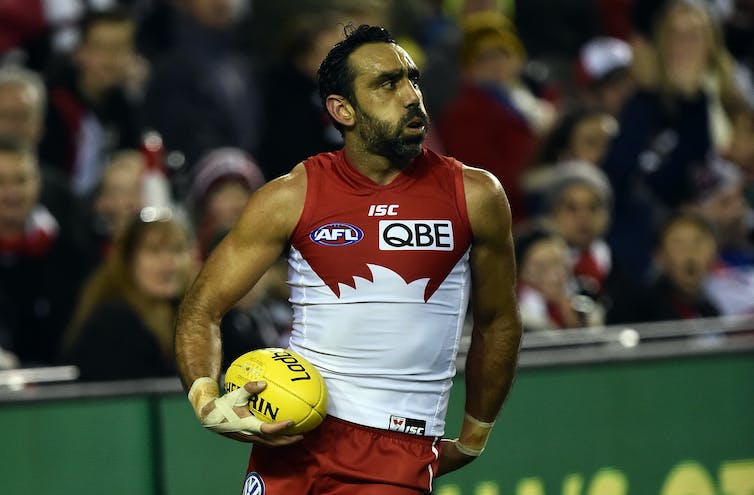 In one of the AFL’s worst moments, Adam Goodes was booed relentlessly during his final season – and the league failed to support him. Julian Smith/AAP

It is this sense of shame that has framed the AFL’s current crackdown on barracking.

Earlier this month, The Final Quarter, a documentary chronicling the vilification of Goodes, was released. On the same day, the AFL issued an unreserved apology for failing to support Goodes when he was being booed during his final season as a player.

One day later, a barracker was evicted from a Carlton-Brisbane game for yelling “bald-headed flog” at an umpire. Later that long weekend, a Collingwood fan was warned that his barracking was too loud and he would be evicted if he continued to shout. Soon after, the “Behavioural Awareness Officers” started patrolling the crowds for unruly fans.

The AFL clearly wanted to stop the behaviour of some barrackers from making other spectators feel unsafe. But the change in policy felt too arbitrary and reactionary – the league did not consult, explain or seek to educate AFL supporters about it.

The result was confusion, angst and resentment among fans. To many, a core aspect of barracking - the “delightful privilege” of shouting out at umpires and players - was under threat. The issue began dominating conversations about football. And the league, perhaps concerned about the damage to its brand, quickly backed down.

The AFL is frequently celebrated for the inclusivity of its fan culture, especially the large percentage of female fans. Yet, the shouts of barrackers are regularly sexist and homophobic. This makes some spectators feel unsafe and unwelcome at games. The league needs to address this.

Read more: Racial abuse is rife in junior sports – and little is being done to address it

But a blanket ban on vociferous barracking is not the answer. Instead, the AFL needs to work with its passionate fans, rather than against them. It needs to demonstrate to fans how certain forms of abuse create unsafe environments, and to set clear limits indicating what forms of abuse are unacceptable beyond racial and religious vilification.

At issue are the values of the league and the effects of certain words. Challenging questions need to be asked and answered. Is it OK to call an umpire a “bald-headed flog”? Is it OK to tell a male player that he kicks “like a girl”?

This is too important an issue to be addressed in a hurried and reactive manner. The “magnificent uproar” of footy has been a central part of the game for over 100 years. It should remain so, but in a way that neither threatens nor vilifies others.