You’ve probably heard eating too much fatty red meat is bad for your health, while lean meat and chicken are better choices. So, recent headlines claiming white meat is just as bad for your cholesterol levels as red meat might have surprised you.

The reports were triggered by a paper published in the The American Journal of Clinical Nutrition earlier this month.

The study did find lean white meat had the same effect on cholesterol levels as lean red meat. While this might be construed as good news by lovers of red meat, more research on this topic is needed for a clearer picture.

How was this study conducted?

The researchers set out to compare three diets: one where the main dietary source of protein came from eating red meat (beef and pork), another where it came from poultry (chicken and turkey), and a third where it came from plant foods (legumes, nuts, grains and soy products).

The researchers also wanted to know whether blood fat levels changed more when the background dietary patterns were high in saturated fat, derived mostly from full-fat dairy products and butter, or when they were low in saturated fat.

Within these two groups they were further randomly assigned to follow three separate diets for four weeks each: red meat, white meat, and plant protein sources. The main protein sources in the meat groups came from lean cuts of red and white meat. In the plant diet, protein came from legumes, nuts, grains and soy products.

Participants met research staff weekly to collect their food products and received counselling on following their specified diet. Participants were asked to maintain their physical activity level and keep their weight as stable as possible so these factors did not bias the results.

To eliminate any carry-over effects from eating one type of protein to the next, participants were given between two and seven weeks break in between each diet and told to return to their usual eating patterns.

What did the study find?

Some participants dropped out along the way, so in the end researchers had results from 113 participants.

Blood concentrations of LDL cholesterol and apoB were lower following the plant protein diet period, compared to both the red and white meat periods. This was independent of whether participants were on a background diet of high- or low-saturated fat.

There was no statistically significant difference in the blood fat levels of those eating red meat compared to those eating white meat. 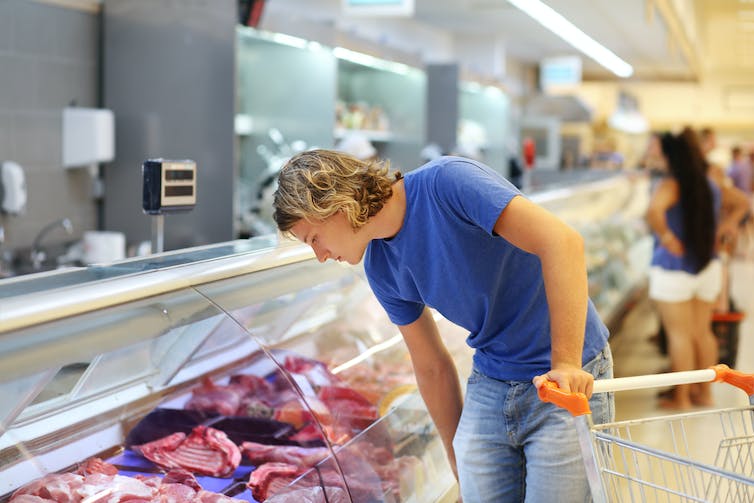 We’re often told to limit our consumption of red meat. From shutterstock.com

How should we interpret the results?

Although the test diets only lasted four weeks each, this study is important. It’s rare to see intervention studies that directly compare eating different types of meat and sources of protein and the impact on heart-disease risk factors. This is partly due to the challenge and expense of providing the food and getting people to follow specific diets.

Most studies to date have been cohort studies where people are categorised based on what they eat, then followed up for many years to see what happens to their health.

One review of cohort studies found no greater risk of stroke in those who eat more poultry compared to less poultry, while another showed a higher risk of stroke among those eating more red and processed meat relative to poultry intake.

Read more: Should we eat red meat? The nutrition and the ethics

There are a few things to keep in mind with this study. First, the researchers used the leanest cuts of both red and white meats, and removed all visible fat and skin. If participants were eating fatty meat, we may have seen different results.

The significant variation in breaks between different diets (ranging from two to seven weeks) may have also affected the results. Participants with a longer break would have had more time for their blood cholesterol levels to change, compared to those with shorter breaks.

Finally, in reporting their results, it would have been better to include all 177 participants who began the study. People who drop out often have different health characteristics and leaving them out may have biased results.

This short-term study does not provide evidence that choosing lean white meat over red meat is either better or worse for your health.

But the findings are consistent with recommendations from the Heart Foundation to include a variety of plant-based foods in our diets, foods containing healthy types of fat and lower amounts of saturated fat, and in particular, to choose lean red meat and poultry.

The article presents a fair, balanced and accurate assessment of the study. In this study, they showed lean red meat and lean white meat (with all visible fat and skin removed) had the same effect on blood fat levels.

Importantly, plant protein sources (such as legumes, nuts, grains and soy products) lowered blood fat levels compared to the red and white meats, and this was independent of whether the participants had been placed on a background diet low or high in saturated fats. This study did not look at the impact of a fish-based diet on blood fats. – Evangeline Mantzioris