When Prime Minister Scott Morrison announced his cabinet a couple weeks ago, he made a point of trumpeting the seven women who would serve as ministers – a “record number” for an Australian government.

Despite this breakthrough, however, female representation remains a visible problem for the Coalition. Just 23% of the Coalition’s MPs are women after the recent federal election, compared to 47% for the ALP.

The Coalition’s “women problem” has long been discussed in the media. But it’s not just the number of women in parliament that matters – it’s how they go about legislating for change.

A neoliberal feminist approach to policy-making

Having women in positions of political power does make a difference. Not only does this bring a diversity of viewpoints to the decision-making process, research shows women politicians are more likely than men to introduce legislation that benefits women.

In fact, researchers analysing the World Economic Forum’s Global Gender Gap data have found the presence of women in politics is the most important factor in improving gender equality. Other significant factors include having a female head of state and large numbers of female ministers.

In Australia, political parties across the ideological spectrum can take credit for introducing legislation aimed at improving women’s lives. But there is a difference in how the parties on the right and left approach the issue of gender equality, the policies they pursue and the overall effectiveness of these policies.

A closer look at the Coalition’s policies on women’s issues, for example, reveals an approach more in line with “neoliberal feminism”, a new brand of feminism that recognises gender inequality but ignores the broader socioeconomic and cultural structures that hold women back.

Read more: How neoliberalism colonised feminism – and what you can do about it

According to neoliberal feminists, the struggle for gender equality is no longer dependent on collective action by society. Rather, it’s up to individual women to make the most of their opportunities and find success.

This focus on the individual informs many of the Coalition’s policies on women’s issues, such as its future female entrepreneurs program and its pledge to provide scholarships and work experience opportunities for women seeking careers in the finance industry. This approach dovetails with Morrison’s overall campaign mantra, as well:

If you have a go in this country, you will get a go. There is a fair go for those who have a go.

But while the Coalition government tends to promote policies geared toward individual women’s advancement, the underlying causes of gender inequality are sometimes overlooked.

We’ve examined the programs offered in each of these areas to assess how effective they’ll be in improving women’s lives.

The goal of the workforce participation initiative is to close the gap between the percentage of men and women in the labour force, which is currently 9.5%.

This part of the plan details various employment programs being introduced by the government that may benefit women. It also focuses on improving data collection to better track the gender pay gap across industries. But while this is important, there is no commitment to action based on this improved evidence.

Read more: No matter who is elected, more work remains on women's rights and Indigenous issues

The only immediate benefit for women re-entering the workforce is more flexible access to paid parental leave. But the initiative has been criticised for its silence on other important workplace participation issues, such as access to quality part-time work and affordable housing.

The economic independence part of the plan includes some commendable initiatives around expediting family law property disputes for couples who are separating or divorcing, which reduces the financial strain on women.

There is also a continued commitment to help women experiencing domestic violence, for instance, by funding legal assistance to ensure victims are protected from direct cross-examination by their perpetrators in court. However, when you look at the specifics, the plan mostly just repackages existing government initiatives.

This part of the plan also does not recognise the broader issues impacting women’s economic independence, such as the barriers in the social security system faced by victims of domestic violence and the high proportion of women and single-parent households living in poverty.

Read more: Acting on gender-based violence must be a priority for the next federal government

Finally, the earning potential initiative includes a promise to expand a program encouraging girls to pursue careers in STEM fields (science, engineering, technology and maths), and the funding of a new program to support female entrepreneurship.

While important, these initiatives do not address the systemic issues preventing women from boosting their earning potential, such as introducing programs to address the cultural barriers to women working in STEM.

Finally, there is the matter of the funding for all of the programs proposed in the Women’s Economic Security Statement – the plan only allocates A$119 million over four years for the entire package of reforms. Women’s groups have criticised this modest investment, given the scope of the problems. 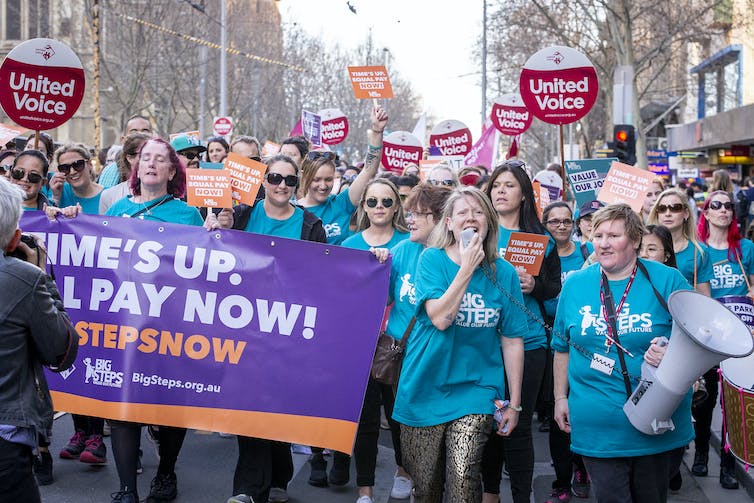 Childcare workers are among those advocating for equal pay in Australia. Women make up 97% of the industry. Daniel Pockett/AAP

What steps the government should take

It is time to move beyond this individualised approach to gender equality. What Australia needs is a systemic approach toward improving the lives of women that includes major reforms to the welfare system, significant increases in funding and resources devoted to domestic violence, improved housing affordability, and reforms to the tax system that unfairly disadvantages women.

In addition, the country needs to strengthen sexual harassment laws, pass a new law to make misogyny a hate crime and make it easier for women to pursue equal pay complaints in the workplace.

The Coalition government should take note: neoliberal feminism may benefit some women, but is unlikely to herald long-lasting changes that improve the lives of all women, particularly those at the lower end of the pay scale.