Nothing beats the Adelaide winter blues quite like a superb, well-crafted cabaret show in a warm, cosy, intimate space. And few theatre spaces are more suited to cabaret than the Famous Spiegelent, which returns for the 2019 Adelaide Cabaret Festival, now under the leadership of Artistic Director Julia Zemiro.

Among the opening weekend highlights was the world premiere of self-described “faboriginal” Steven Oliver’s autobiographical Bigger and Blacker, a series of poignant, and hard-hitting stories told through song, prose, and spoken word poetry. Many will know Oliver from his brilliant character sketches on the ABC series, Black Comedy.

Working with musical director and cabaret stalwart Michael Griffiths, Oliver, a gay Aboriginal man, presents stories of “being lost and found again”. The journey touches on his recent success, one that suddenly made him if not famous, at least “gaymous”.

It takes us through his setbacks in finding love, the pain of confronting racism in the online world and his struggle with depression to his offer to open up cultural space for Aboriginal and non-Aboriginal Australians to meaningfully engage with one another.

Oliver brilliantly and relentlessly plays with words from a position of his double-marginalisation as “a minority within a minority”. As we travel with him, we are guided through unlikely spaces, including the back room of a gay bar where, as he observes, Aboriginal men “won’t be hard to find because we’re the only blacks”.

In a smart, black suit and bow tie, Oliver commands the stage with his presence and his stories. His spoken word poetry alternates with his original songs: both possess a confessional, soulful quality.

Words pour out of his body and heart, sometimes erupting like a geyser, then a raging river, winding down into a narrow stream, a patter, punctuated by a pause. He is at times a conjurer, using language like a preacher, taking it into the realm of incantation. It is as if by saying it, he makes it so. 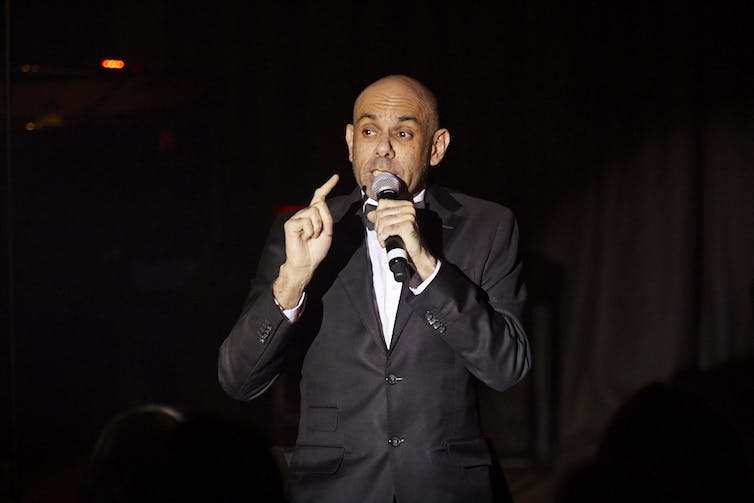 Oliver alternates between spoken word and poetry throughout the show. Claudio Raschella

Throughout, his hands and body only briefly come to a full stop, and then only for dramatic effect.

Oliver is a beautiful mover, swaying and rocking, at one point launching into a jaunty tap routine while engaged with a bit of playful banter with the ever-dapper Griffiths, seated at the piano. But his hands are his most expressive physical tool. They accentuate and underline words, flittering, exploding and twirling at speeds that sometimes appear to be faster than light.

Oliver’s rhyming is clever, at times brilliant, as he lets the movement of the words guide him into storytelling, rapping, and then transitioning into song. Griffiths adeptly supports him, leading from spoken word to song with musical phrases that appear as if out of the air.

Griffiths also provides back-up vocals and harmonies for Oliver, while never overpowering him. It is a musical collaboration marked by generosity, restraint, and mutual respect. 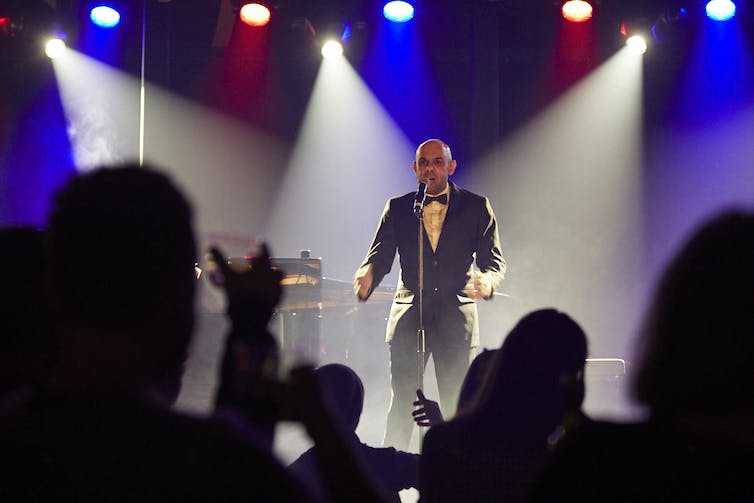 Oliver’s hands are his most expressive tool. Claudio Raschella

At times, Oliver gives us more naughty than nice, causing jaws to drop a bit, as when, early in show, while speaking of the therapeutic value of dance, he says, “When you shake your ass, you shake off a lot of shit”. Taking a beat, he adds, “ohhhh, that came out wrong”, requiring another beat, ending with an audible audience groan.

Oliver shows himself to be a master at drawing the audience into the material, an essential feature of cabaret. Many of his musical numbers caused spectators to involuntarily tap their feet on the wooden floor of the Spiegeltent, physically connecting us to one another.

Though intensely personal, Oliver’s words and songs are consistently interwoven into the larger social fabric of being Indigenous in Australia. Speaking of trolling on Facebook on social media, he observes trenchantly, “The thing about racism is that it teaches you how to behave”. When he later recounts his struggle with depression, he connects it to a story about a boy bullied for being effeminate, calling for a world where such a boy would “not just dance to sadness, but just dance”.

Bringing the personal and the political together, Oliver ended the evening with another urgent spoken word piece. “I’m a blackfella”, he asserts, observing that learning to engage starts “by talking to me”.

With Bigger and Blacker, Oliver jump-starts such a conversation by bringing us along for a ride that is thrilling, exhilarating, and at times, equal parts naughty and challenging.

Adelaide Cabaret Festival is on until June 22.