When a threatened species is found only in one small area, conservationists often move some individuals to another suitable habitat. This practice, called “translocation”, makes the whole species less vulnerable to threats.

In the past, this approach has worked really well for some species, but climate change is creating new problems. Will the climate change at that location in the future, and will it remain suitable for the species of interest? On the other hand, some regions might become appropriate for a threatened species.

This fundamental question is important in a rapidly changing climate, yet it has seldom featured when picking new areas for translocations. 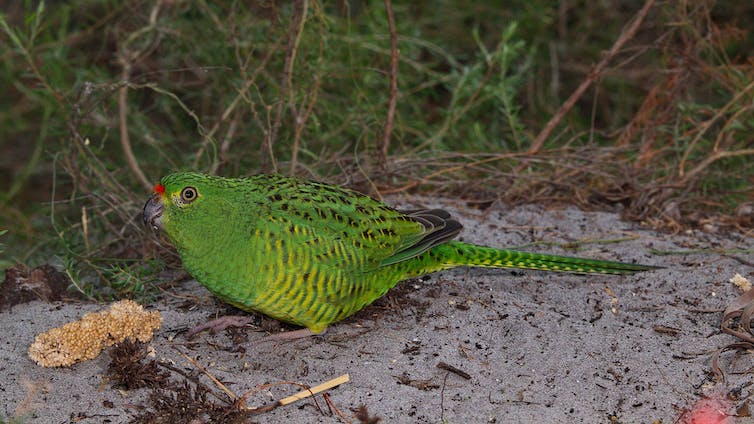 Western ground parrots live and nest on the ground, making them very vulnerable to foxes and cats. Alan Danks/DBCA

Our recent research applied climate change modelling to translocation decisions for the critically endangered western ground parrot. This species is now restricted to a single population, with probably fewer than 150 birds, on the south coast of Western Australia.

It is enigmatic, in that it lives and nests entirely on the ground, unlike almost all other parrots except the closely related night parrot. And it is one of the many unique animals that make Australia so distinctive from all other parts of the world. But living on the ground has its drawbacks, as the parrot is very vulnerable to foxes and cats.

Its home near the south coast is particularly vulnerable to the effects of climate change. As southwestern Australia becomes warmer and drier, the risk of fire to the parrot increases.

Understanding potential climate change impacts is essential when selecting reintroduction sites. We developed high-precision species distribution models and used these to investigate the effect of climate change on current and historical distributions, and identify locations that will remain, or become, suitable habitat in the future.

Our findings predict that some of the western ground parrot’s former south coast range will become increasingly unsuitable in the future, so reintroductions there may not be a good idea. Four out of 13 potential release sites are likely to become inhospitable to these threatened birds.

On the other hand, many of the former or future sites are likely to become important refuge habitats as the climate continues to warm, and would make an excellent choice for any translocations or reintroductions.

We have given this information to an expert panel, who will use these predictions identify and prioritise areas for management and translocation. 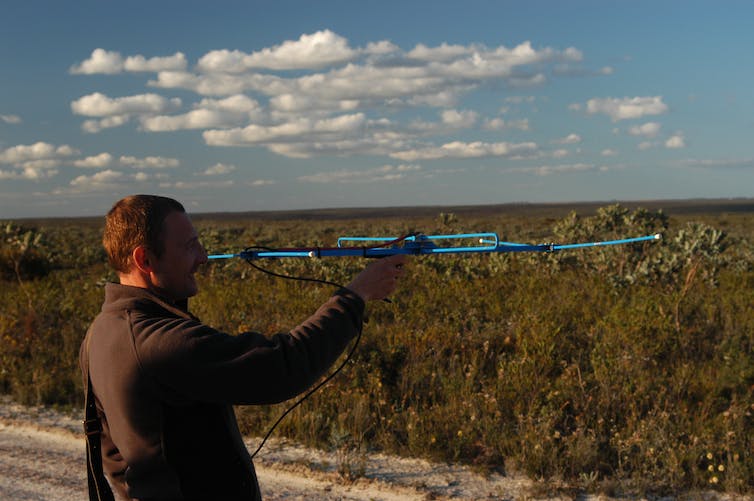 Researchers have radio tracked a small number of birds to learn more about habitat use and movement patterns. Allan Burbidge

The parrot in the coal mine

Fire is already a significant threat which, combined with predation by feral cats, may have led to the loss of this species from its former home at Fitzgerald River National Park. Many of these threats act together, so they must all be considered and managed alongside climate change.

What’s more, the western ground parrot may be an important indicator for the fate of many other species it currently (or formerly) shares its range with. These include the western whipbird, noisy scrub-bird, and a carnivorous marsupial, the dibbler.

These species are all likely to face the same threats and may be equally affected by the changing climate. Future studies will attempt to model these species and to assess whether all will benefit from similar management.

Many challenges remain for the western ground parrot, including the possible negative genetic impacts of the current small population size, and the increasing risk of damaging fires in a drying and warming climate.

But locating “future-proofed” sites is giving us some hope we can ensure the long term persistence of this enigmatic species, and the myriad other unusual species that occur in the biodiversity hotspot of southwestern Australia.

The authors would like to thank Allan Burbidge and Sarah Comer from the WA Department of Biodiversity Conservation and Attractions for their invaluable help and guidance in putting together this article.