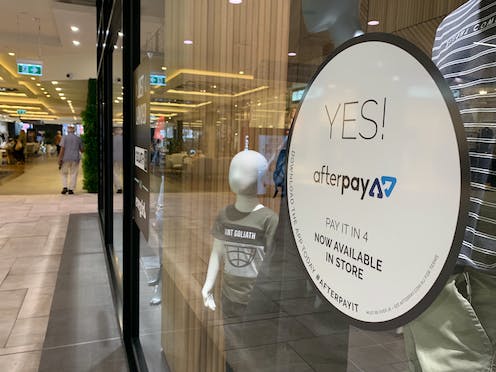 Credit used to be straightforward. A company that let you own something and pay for it over time was called a credit provider. It might be a bank, a department store or a credit-card company.

Now there are “buy now, pay later” (BNPL) businesses. They too let you own something and pay for it over time. Yet these companies are not classified as credit providers.

A key reason is they don’t technically charge interest.

Credit is defined in the dictionary as “a method of paying for goods at a later time, usually paying interest as well as the original money”. Debt is simply “the amount of money you owe to someone else”.

It’s due to such distinctions that so many BNPL companies – including Afterpay, Zip and Splitit – have set up in Australia. Definitions in Australia’s national credit law have created loopholes that enable BNPL companies to operate free of the obligations applying to credit providers.

The question therefore arises as to whether the law should make any distinction between credit and debt.

The ways by which BNPL providers are not covered by the National Credit Act was examined by the Australian Securities and Investments Commission (ASIC) in 2018. The regulator looked at six leading BNPL companies and found:

Read more: How Zip Pay works, and why the extra cost of 'buy now, pay later' is still enticing

Let’s take a closer look at Afterpay, because it is an industry leader. Note the exact way other BNPL companies collect revenue might differ considerably, as indicated by the following data compiled by ASIC.

Because BPNL companies are not regulated under the Credit Act, Afterpay is not legally required to observe the Act’s responsible lending obligations, which include performing a credit check and verifying a customer’s income and ability to pay a debt back.

As The Sydney Morning Herald put it:

Afterpay reserves the right to do credit checks (according to clauses 6.1 and 6.2 of its customer agreement) but it can otherwise approve a customer request almost instantly. This makes it very convenient; but also increases the risk it will be dishing out money to people that can’t afford to get into debt.

In lieu of charging interest, Afterpay relies on two mechanisms to make a profit.

About three-quarters of its revenue comes from merchant fees. On every purchase, Afterpay charges the merchant a commission of 4-6% of the value of the transaction, plus 30 cents.

The other quarter comes from late fees, imposed on customers when they fail to make repayments on time.

Afterpay’s standard repayment period is two months, with customers expected to make four equal payment every two weeks. If you miss a repayment to Afterpay, you will be charged $10, and a further $7 if the payment remains unpaid seven days after the due date.

So late fee could really add up. On a debt of $150 (the average order, according to Afterpay) just one $10 late fee translates to an effective interest charge 6.67% for the fortnight. Just consider what having to pay a couple of late fees would equal in terms of an effective annual interest rate.

As the above comparative chart of revenue sources indicated, late fees make up a larger portion of Afterpay’s than other BNPL providers.

The proportion of its annual revenue coming from late fee has also been increasing as its total revenues escalate. In the 2016 financial year, late fees contributed 16.25% of Afterpay’s revenue. In 2018 it was 24.6%.

By way of comparison, late fees, on average, comprise less than 1% of revenue for Alinta Energy, and 7.35% for credit card companies.

About 75% of Afterpay’s customers are aged 17 to 37, according to the company. This means its customer base is skewed more towards younger people than BNPL providers generally. ASIC estimates 60% of BNPL users are aged 18 to 34, and 40% earn less than A$40,000 a year.

The nature of BNPL services encourages customers to make impulse purchases. As a result, ASIC’s research has found:

What this suggests is there are good grounds to close the legal loopholes that allow debt providers to operate under a different set of rules to credit providers.

Authors: Saurav Dutta, Head of School at the School of Accounting, Curtin University