The Prime Minister has maintained his record number of women (seven) in cabinet, and created a new entry to the history books by appointing the first indigenous cabinet minister, Ken Wyatt, who will become minister for indigenous Australians.

Let’s hope this is not a poisoned chalice for Wyatt, who previously held aged care and indigenous health in the outer ministry. It is one of the hardest jobs and the expectations and pressures on him from indigenous people will be enormous.

Morrison has highlighted the priority he wants to give to improving program implementation, including and especially the National Disability Insurance Scheme.

Stuart Robert, one of the Morrison friends and supporters promoted in the reshuffle, becomes minister for government services and minister for the NDIS, and is elevated to cabinet.

Addressing senior public servants the other day, Morrison lectured them on the need for “congestion busting” in the bureaucracy. The NDIS has had serious teething problems. Time will show whether Robert, who moves from assistant treasurer, can deliver on improving delivery. He personally has been the centre of political controversies and last year had to pay back about $38,000 for excessive internet use at home.

Ben Morton, a Morrison confidant who travelled with him in the campaign, becomes assistant minister to the prime minister and cabinet, one of those nice “in close” positions that are all about relationships.

Greg Hunt, much praised by Morrison during the election, adds to his health job the position of minister assisting the prime minister for the public service and cabinet, which gives him extra access to the PM’s ear.

Energy and emissions together

In a major move, Morrison has brought together energy and emissions reduction under Angus Taylor. This means Taylor, whose performance as energy minister has been underwhelming, has responsibility for the climate change area as well as continuing to try to achieve lower power prices.

The government skated through the election with climate change not having as much electoral bite as expected and high energy prices failing to extract the political toll they might have. But this is going to be a hard policy area in the coming term, as industry will be looking for more investment certainty, and consumers will want better results on prices. Taylor will need to lift his game.

As expected and despite Morrison’s commitment during the campaign, Melissa Price is out of environment and out of the cabinet. She’s now in the outer ministry, in defence industry, where she can continue to be neither seen nor heard. As Morrison put it with delicate understatement: “Melissa and I discussed her role and she asked to be given a new challenge and I was happy to give her one”.

Two top level diplomatic jobs make space for appointments to the Senate. Mitch Fifield, who held communications, is off to be United Nations ambassador in New York, and Arthur Sinodinos, who seemed a monty for a cabinet post after his return from sick leave, will replace Joe Hockey in Washington. Morrison said Fifield’s exit was by choice – that he could have stayed in his portfolio.

Jim Molan, who unsuccessfully attempted to survive as a senator by appealing for people to vote for him “below the line”, will hope to get the NSW Senate spot; Sarah Henderson, who lost Corangamite, will seek preselection for the Victorian vacancy.

Paul Fletcher, with a background in Optus, takes over Fifield’s communications portfolio.

A minister for housing

The core economic team of Josh Frydenberg in treasury and Mathias Cormann in finance remains, with Michael Sukkar, from the hard right in Victoria, becoming assistant treasurer and housing minister. He will be in charge of implementing the Coalition’s election promise for a deposit guarantee for first home buyers.

Alan Tudge keeps population, cities and urban infrastructure while being promoted to cabinet.

Notably, responsibility for industrial relations (previously with the now-departed Kelly O'Dwyer), has been handed to Christian Porter, who stays attorney-general and becomes leader of the House. Porter immediately signalled his law-and-order priority in industrial relations: “my initial focus will be on the law enforcement aspects of the portfolio, ensuring adherence with Australia’s industrial relations laws, particularly on building sites across Australia”.

Of the females in cabinet Marise Payne, who retains foreign affairs, is the new minister for women, while Michaelia Cash, who was in a heap of trouble last term, has employment, skills, small and family business, gaining employment.

As he promised, Morrison has elevated Linda Reynolds, whom he appointed to cabinet in March, to defence, formerly held by Christopher Pyne, who left parliament at the election. This is a huge job for Reynolds, regardless of her background in the military. Alex Hawke, who is close to Morrison, becomes assistant defence minister, and minister for international development and the Pacific.

Sussan Ley is back in cabinet after a break, taking the downsized environment portfolio. Anne Ruston is promoted to cabinet, as minister for families and social services. Karen Andrews remains in industry and in cabinet.

The Nationals have lost a cabinet position, going from five to four – this results automatically from the change in their ratio within the Coalition – despite the fact they did well at the election.

Morrison confirmed that McCormack chose who went into the portfolios the Nationals have. Nationals sources say McCormack pressed for a better deal on portfolios, Liberal sources deny this.

Among those not moving, Peter Dutton stays in home affairs, Dan Tehan in education and Simon Birmingham in trade.

Morrison has put his stamp on his team without being radical. Notably, no one was dumped to the backbench.

And the chance of an early return for parliament

Meanwhile Morrison also hinted he was hoping that, despite the current advice, there was a chance parliament could be brought back before July 1 to pass the tax cuts so the first tranche could be delivered from then.

He told his news conference:

We are awaiting advice from the [Australian Electoral Commission] as to when the return of writs will be provided.

At present they’re saying that’s June 28 and there’s a possibility of that occurring earlier. That presents different opportunities for when [we] might be able to recall parliament.

Delivering those tax cuts right on time is something Morrison would really like to do. It’s a fair bet the AEC is being urged strongly to “deliver” those writs early, if it’s humanely possible.

Meanwhile on the Labor side, Richard Marles is now assured of becoming deputy leader to Anthony Albanese, after Clare O'Neil – who like Marles is from the Victorian right – said on Sunday she would not contest the deputy leadership.

For the fridge door: 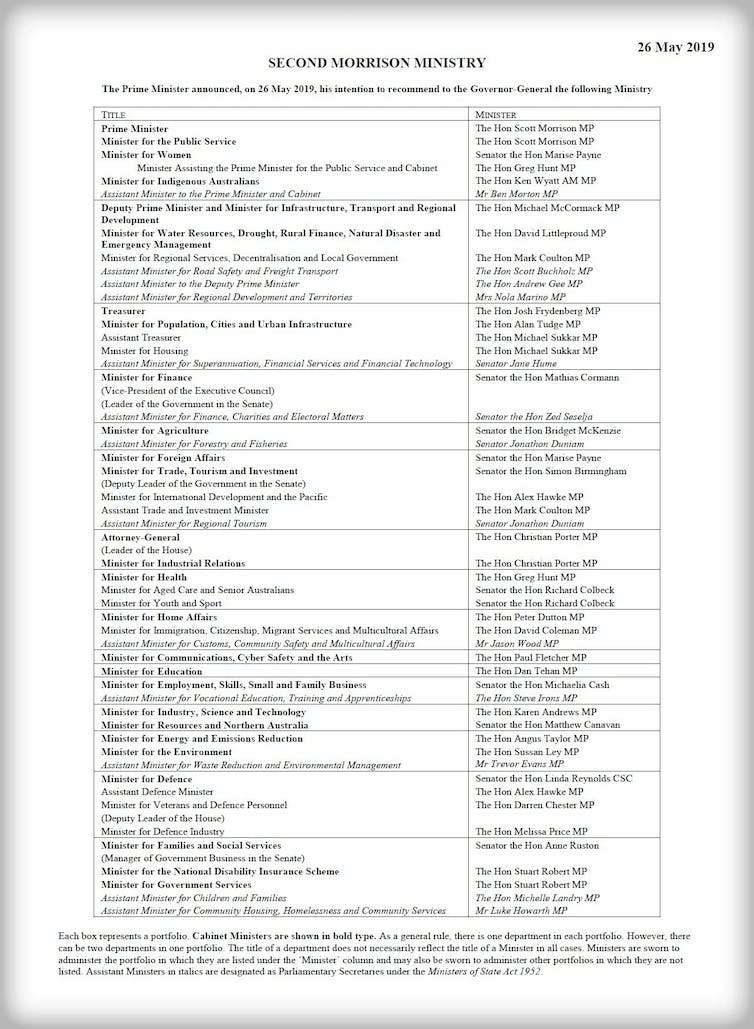