“What the hell is wrong with Queensland?”

Such comments are at the polite end of social media responses from progressive voters in other parts of Australia who were disappointed by the Coalition’s “miracle” win on Saturday.

Putting to one side the fact that the swings against Labor were not much bigger in Queensland than some other parts of the country, and that it had the most marginal seats in the election, the instinct to blame and deride Queensland highlights exactly what went wrong for the ALP.

Contrary to the claims of #Quexiteers, Queenslanders are not all deeply conservative, rusted-on LNP voters, even in central and northern regions. If they were, they wouldn’t have elected Labor governments for 25 of the past 30 years.

The problem for Labor, then, isn’t that Queenslanders don’t like voting Labor. Instead, the federal Labor Party, like the many pundits who predicted an ALP win, seem to have underestimated or misunderstood the variances and nuances of the Queensland electorate.

As the only state where a majority of the population lives outside the capital city, regionalism matters in Queensland in a way it does not elsewhere.

Why Queensland is different

Settlement patterns in Queensland did not mirror other states. Regional towns and cities developed as service centres and ports for the hinterland industries, among them beef, gold, sugar, coal and gas. The first railways in the 1860s ran from the ports in coastal towns to these inland production centres, creating an interdependence not replicated in other parts of the country.

Queensland’s regions, therefore, developed as separate economic entities, with limited connection to the rest of Queensland (including the capital Brisbane), or indeed Australia.

This geography also informs the way people have historically voted. Any threat to the economic viability of hinterland industries had a spillover effect on the regional towns that serviced them.

As regions reliant on export industries, they have been highly susceptible to cycles of boom and bust. Many are still suffering high unemployment and depressed housing prices following a slowdown in mining and the end of the LNG construction boom in and around Gladstone. Frequent natural disasters have compounded their difficulties.

Read more: The myth of 'the Queensland voter', Australia's trust deficit, and the path to Indigenous recognition

As a result, Queensland governments have had to be highly responsive to the interests and fears of diverse communities.

The national focus of federal politics, however, is less conducive to understanding the differences between, say, Cairns and Clermont, Caboolture and Charleville. This hurt both Labor and the Coalition in the recent federal election, as evidenced by the rise in first preferences to minor parties like One Nation and the United Australia Party.

Labor suffered more, though, due to its policy-rich campaign platform focused mainly on metropolitan, first-time home buyers and environmentalists. This did not signal to regional Australians, particularly those in Queensland, that their concerns had been heard.

Who is representing the workers?

Queensland has a proud place in Labor history. The Labor movement was born under the Tree of Knowledge in Barcaldine in 1891. The state also elected the world’s first Labor government in 1899. To characterise Queensland as regressive and redneck is to deny its historic and contemporary relationship with the Labor Party and workers.

It may be that working Queenslanders no longer see their lives or aspirations reflected in the federal Labor Party and its leadership. The pathway that Andrew Fisher and Ben Chifley took, for example, from engine driver to prime minister has gone the way of the poisoned Tree of Knowledge. Labor is now dominated by professional political operatives drawn from the knowledge and professional classes – the group Bill Shorten personified.

Read more: State of the states: Queensland and Tasmania win it for the Coalition

When workers couldn’t see their concerns and fears reflected in Labor policies, they parked their vote with the permanent voices of disaffection – Pauline Hanson and Clive Palmer. And in the federal election those parties’ preferences flowed strongly to the LNP.

In the marginal seats of Flynn, Capricornia, Dawson, Forde and Petrie, the LNP’s primary vote scarcely moved. After preferences, however, swings to the LNP ranged from 5.7% in Flynn to 11.1% in Capricornia and 11.4% in Dawson, with votes still to be counted as of Wednesday.

Concerns of the ‘neglected classes’

Labor paid the electoral price for misjudging Queensland, but it was far from alone in doing so. Analysts and commentators, predominantly those south of the Tweed, indulged in the smug chauvinism of tired stereotypes. Social media lit up, exposing the cultural and political divide between urban, regional and rural Australia that journalist Gabrielle Chan documented in her recent book, Rusted Off: Why Country Australia is Fed Up.

Chan describes the “neglected classes” – Australians locked out of opportunity by economic and social shifts, as well as a lack of technology, in the nation’s left-behind places. An index of prosperity and distress in Australian localities developed by the Centre of Full Employment and Equity identifies the seats of Hinkler, Wide Bay, Kennedy, Maranoa, Flynn and Capricornia in Queensland among the most economically distressed in the nation. Dawson, Blair, Longman, Herbert and Rankin are classified as “high risk”.

The prevailing discourse in Canberra, Sydney and Melbourne that this was the “climate change” election obscured the role that economic insecurity and disadvantage might have played in shifting votes to One Nation and United Australia, which flowed as preferences to the Coalition. 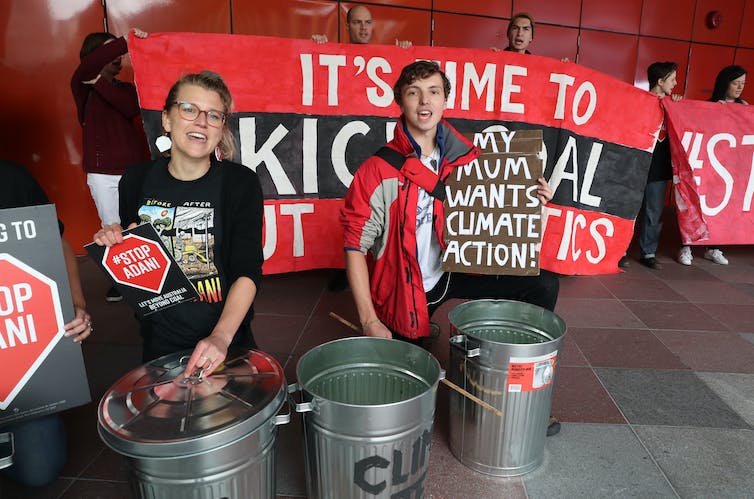 Voters in other parts of Australia made the Adani mine a campaign issue, but in Queensland, other concerns were paramount. David Crosling/AAP

Lessons for the future

What, then, can we learn from the 2019 federal election? For one, we need a better way of understanding the needs and interests of all Australians in election campaigns and developing a nuanced sense of local contexts and concerns.

Griffith University’s data dashboard and our coverage of Queensland seats sought to ensure more informed reporting of the campaign than we have come to expect from the national media and commentators, whose lack of knowledge of different parts of Queensland seldom tempers their opinions.

Another important take-home is that federalism matters – perhaps more than ever. Australia’s federal framework was premised on the principle of subsidiarity – that decision-making should be devolved to the most local level possible.

National governments, by their nature, are homogenising. Political elites often strive to force states and regions to conform to a one-size-fits-all national policy approach, usually driven from the top down.

Labor’s experience in Queensland, however, suggests that local governments are better placed to accommodate regional differences and try to balance competing influences and perspectives.

Federalism was not mentioned once in the 2019 federal election campaign, but the result in Queensland suggests the need to rethink and reconceptualise the role the national government plays in a contemporary federation. This could help foster a political culture that is more responsive to, and respectful of, all parts of Australia – including and perhaps especially Queensland.