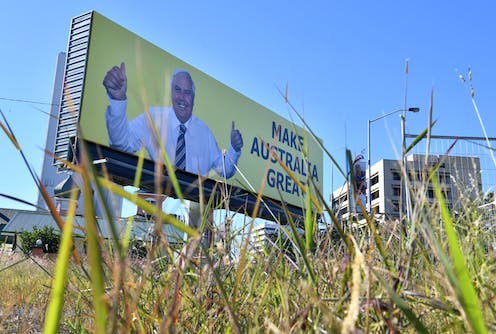 Can billionaires buy elections in Australia? In the 2019 election, Clive Palmer demonstrated they can certainly flood the print media, airwaves, social media and billboards with advertising and have an impact on the results through their preferences and negative advertising.

Apart from United Australia Party hype about how it was going to win government, most of the high-profile advertising in the 2019 campaign was negative. There is a longstanding 48-hour ban on political advertising in radio and broadcast media prior to polling day, but advertising on social media is not covered. The very useful Facebook Ad Library showed the kind of horrors being broadcast during the 48-hour blackout.

Read more: Now for the $55 million question: what does Clive Palmer actually want?

The Coalition was running many “death tax” ads on the Thursday and Friday. These were ads cut to show one Labor frontbencher after another saying the words “death tax”, when in fact they were denying a rumour about such a tax. Negativity, or even sheer invention, proved very effective.

One of the Coalition’s many “death tax” campaign ads.

By comparison, Labor ads on issues such as childcare or the gender pay gap – as well as its own negative ads aimed at the Coalition’s disunity and climate change policies – appeared to have little impact.

Lack of regulations at federal level

How have we arrived at a place where our elections are awash with paid advertising? Believe it or not, this has been a relatively recent phenomenon.

In 1903, the Labor Party’s manifesto proudly promoted the restrictions that had been placed on campaign expenditure in the Commonwealth Electoral Act the year before:

Elaborate precautions exist to prevent wealthy men practically purchasing seats: the expenditure of a senatorial candidate is limited to £250 and of a candidate for the other House to £100.

These expenditure limits became increasingly obsolete and were not enforced. They were discarded at the federal level after 1980, following a successful challenge to the election of three candidates in the Tasmanian seat of Denison for each having spent more than A$1,500 in the 1979 state election.

As a result, industry bodies wishing to fend off government regulation of guns or poker machines or financial advice are free to spend as much as they like on political donations and advertising.

There is also no “truth in advertising” requirement at the federal level, and the Australian Electoral Commission does not have the authority to approve electoral communications for publication. The only requirement in the Commonwealth Electoral Act is for authorisation, including of electronic advertising. Ultimately, it is up to the courts to enforce this, on a case by case basis.

When the House of Lords upheld the UK prohibition on political advertising in 2008, it argued the ban was necessary to maintain a level playing field, preventing “well-endowed interests” from using “the power of the purse to give enhanced prominence to their views.”

In Australia, the Hawke government tried to stop the arms race over paid political advertising by banning it in 1991 and replacing it with free broadcast time (Political Broadcasts and Political Disclosures Act 1991). But the following year, the High Court in Australian Capital Television Pty Ltd v Commonwealth found that this ban contravened an implied freedom of political communication in the constitution.

This decision put a dampener on reform at the federal level. It is only recently the High Court has changed course to find that burdens on free speech can be legitimate if they serve another democratic purpose, such as political equality.

The constitutionality of regulating political donations was reaffirmed by the High Court in April 2019.

The government had passed amendments to the Commonwealth Electoral Act to enable Commonwealth law to override the tighter regulation of political donations at the state or territory level. This provision was overturned by the High Court and Queensland’s ban on developer donations was upheld. This was despite an attempt by the plaintiff, former LNP Queensland President Gary Spence, to argue it restricted freedom of political communication.

These High Court decisions open the way to possible future caps on expenditure and donations at the federal level, which could reduce the torrent of negative political advertising democracy is currently drowning in.

Clive Palmer’s advertising was largely aimed at Labor’s policies. This ad was viewed more than 800,000 times on YouTube.

Impacts of unlimited spending on democracy

The lack of restrictions on political expenditure or donations at the federal level has contributed to perceptions that government is run primarily for the benefit of the big end of town. In 2016, 56% of respondents to the Australian Election Study believed this.

The laxity of political finance regulation at the federal level also creates loopholes at the state or territory level, where genuine progress has been made in limiting political expenditure by parties, candidates and lobbying groups.

It is equally important that allowing paid political advertising in electronic media drives up the costs of political campaigns and increases dependence on wealthy donors.

Australia could rein in the ever-increasing role of private money in its federal elections. Labor and the Greens are committed to greater transparency for political donations and spending caps on federal campaign expenditure, while the High Court has shown it is now unlikely to strike down reasonable (“proportionate”) regulation of political finance.

Democracy should be about political equality, not about the deep pockets of billionaires.