Today we learnt of yet another remote and formerly pristine location on our planet that’s become “trashed” by plastic debris.

Research published today in Scientific Reports shows some 238 tonnes of plastic have washed up on Australia’s remote Cocos (Keeling) Island.

It’s not the first time the world has been confronted with an island drowning under debris. Perhaps it’s time to take stock of where we’re at, what we’ve learnt about plastic and figure out whether we can be bothered, or care enough, to do something meaningful.

In 2017, the world was introduced to Henderson Island, an exceptionally remote uninhabited island in the South Pacific. It has the dubious honour of being home to the beach with the highest ever recorded density of plastic debris (more than 4,400 pieces per metre squared).

What’s more, a single photo taken in 1992 showed Henderson Island had gone from pristine to trashed in only 23-years.

Now, the Cocos (Keeling) Islands off the coast of Australia are set to challenge that record, despite being sparsely populated and recognised for having one of Australia’s most beautiful beaches.

A recent, comprehensive survey of the Cocos (Keeling) Islands revealed mountains of plastic trash washed up on the beaches.

Read more: Plastic warms the planet twice as much as aviation – here's how to make it climate-friendly

While the density of debris on Cocos (a maximum of 2,506 items per square metre) was found to be less than that on Henderson Island, the total amount of debris Cocos must contend with is staggering: an estimated 414 million debris items weighing 238 tonnes.

A quarter of the identifiable items were found to be “single-use”, or disposable plastics, including straws, bags, bottles, and an estimated 373,000 toothbrushes. 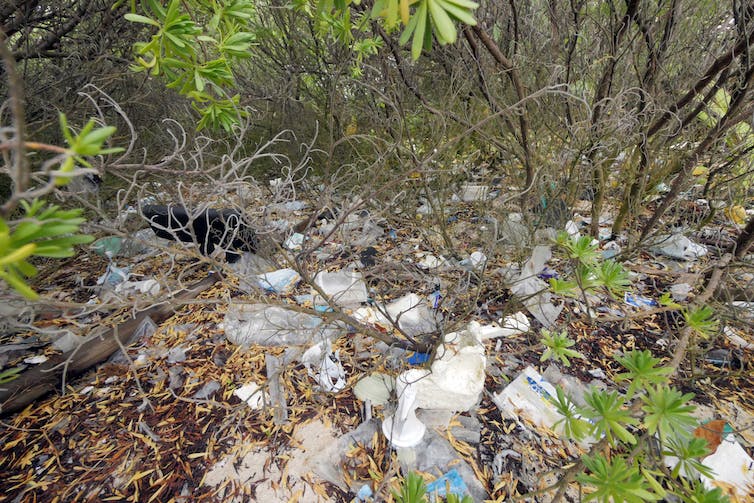 At only 14 kilometres squared, the entire Cocos (Keeling) Island group is a little more than twice the size of the Melbourne CBD. So it’s hard to envision 414 million debris items in such a small area.

Islands “filter” debris from the ocean. Items flow past and accumulate on beaches, providing valuable information about the quantity of plastic in the oceans.

So, what have these two studies of remote islands taught us? 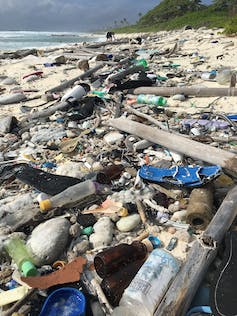 South Island. A quarter of the identifiable items were found to be disposable plastics. Cara Ratajczak, Author provided

On Cocos, the overwhelming quantity of debris you can see on the surface accounts for just 7% of the total debris present on the islands. The remaining 93% (approximately 383 million items) is buried below the sediment. Much like the proverbial iceberg, we’re only seeing the very tip of the problem.

Henderson Island, on the other hand, highlighted the terrifying pace of change, from pristine, tropical oasis to being inundated with 38 million plastic items in just two decades.

In the past 12 months alone, scientists have made other, ground-breaking discoveries that have emphasised how little we understand about the behaviour of plastic in the environment and the myriad consequences for species and habitats – including ourselves.

Read more: Eight million tonnes of plastic are going into the ocean each year

Here are a few of the shocking discoveries:

Clean-ups on near-shore islands and coastal areas around cities are fantastic.

The educational component is invaluable and they provide an important sense of community. They also prevent large items, like bottles, from breaking up into hundreds or thousands of bite-sized microplastics. 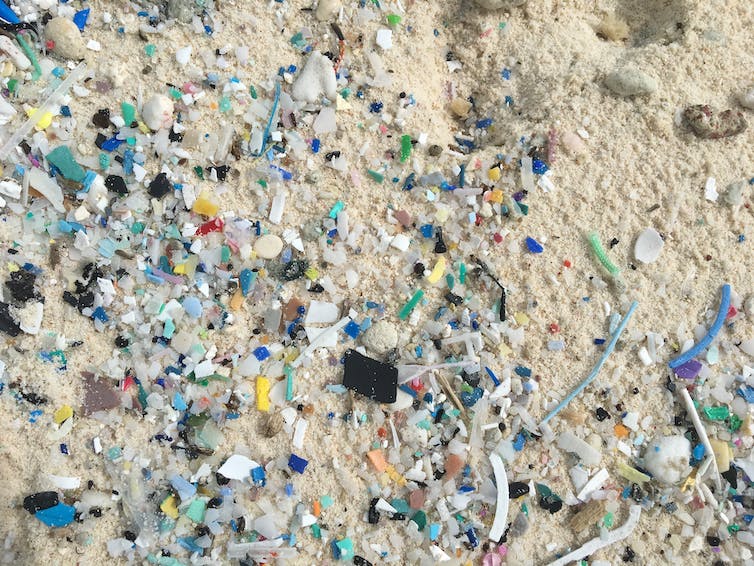 Microplastics (defined as items between one and five millimetres) on the beaches of South Island. Cara Ratajczak, Author provided (No reuse)

But large-scale clean-ups of the Cocos (Keeling) Islands, and most other remote islands, are challenging for a variety of reasons. Getting to these locations is expensive, as would be shipping the plastic off for recycling or disposal.

There are also serious biosecurity issues relating to moving plastic debris off islands. Even if we did somehow manage to clean these remote islands, it would not be long before the beaches are trashed again, as it was estimated on Henderson Island that more than 3,500 new pieces of plastic wash up every single day.

if all we ever do is clean up, that is all we will ever do.

For our clean-up efforts to be effective, they must be paired with individual behaviour change, underpinned by legislation that mandates producers to take responsibility for the entire lifecycle of their products.

Single-use items, such as razors, cutlery, scoops for coffee or laundry powder and toothbrushes were very common on the beaches of Cocos. Clearly this is an area where extended product stewardship laws (following the principles of a circular economy), coupled with informed consumer choices can lead to better decisions about the types of products we use and how and when we dispose of them.

Read more: There's no 'garbage patch' in the Southern Indian Ocean, so where does all the rubbish go?

The global plastic crisis requires immediate and wide-ranging actions that drastically reduce our plastic consumption. And large corporations and government need to adopt a leadership role.

In the EU, for instance, governments voted in March 2019 to implement a ban on the ten most prolific single-use plastic items by 2021. The rest of the world urgently needs to follow suit. Let’s stop arguing about how to clean up the mess, and start implementing meaningful preventative actions.