Australia’s major political parties are not popular institutions. Minor parties and independent candidates have been chipping away at their primary vote for decades. While less than 10% of voters cast a ballot for them in the 1950s and 1960s, almost one in four voters turned away from mainstream parties in 2016.

According to the latest Newspoll, it seems unlikely this trend will change at this election. The major parties are understandably rattled and after a group of independents released a coordinated campaign ad last week, some pundits have been quick to portray them as a new “green-left force” determined to bring Labor into power.

So, is this new wave of independents really part of a coordinated and cohesive left-wing conspiracy, akin to a new political party? Probably not.

First off, the claim is at odds with the intention of some of the very same independents to support a Coalition minority government if the election returns a hung parliament.

What’s more, data from smartvote Australia, a voting advice application developed by the Australian National University (ANU), shows most independents actually take policy positions somewhere between Labor and the Liberals. There is also considerable variance in the positions they take. 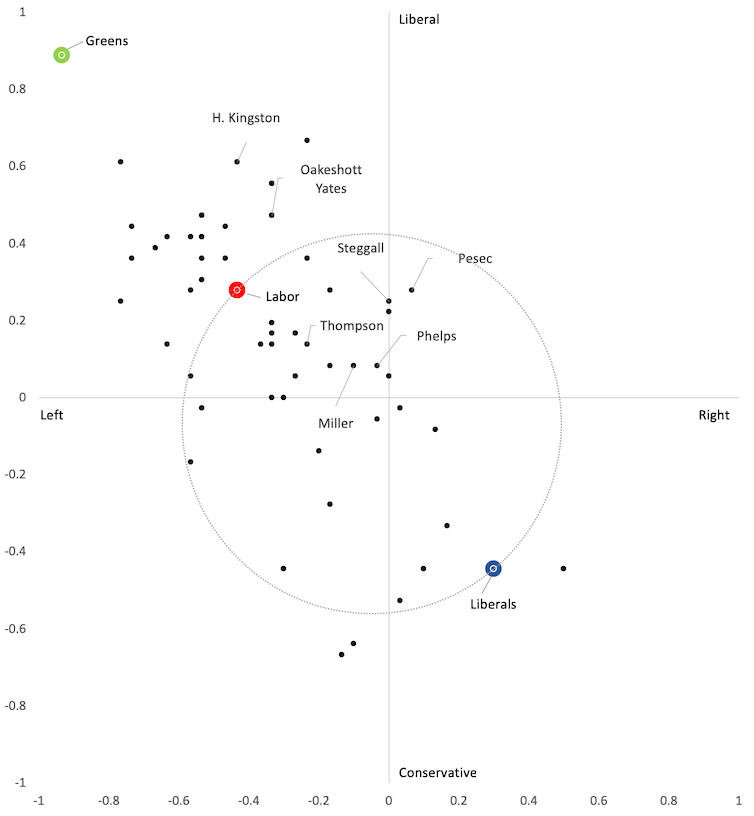 In contrast to party-centric projects that are based on expert coding, smartvote asks voters and their local candidates to fill out the same 35-question survey. It then matches voters with the local candidates who align the closest with their views (and, if you are curious, you can see how you compare to candidates and parties running in your electorate here).

Smartvote invited all candidates and parties running for parliament in the 2019 election to participate. One week out from the election, it contained information from about 70% of the 50-plus parties that are fielding candidates. In addition, smartvote includes the answers of 40% of all independents running for the election – some of whom are incumbents or have a good chance of winning on May 18.

Read more: How much influence will independents and minor parties have this election? Please explain

Most independents who participated in smartvote find themselves somewhere between Labor and the Liberals (what some of them call the “sensible centre”). And while some are more progressive than Labor on the social dimension, none is to the left of Labor on the economic dimension. 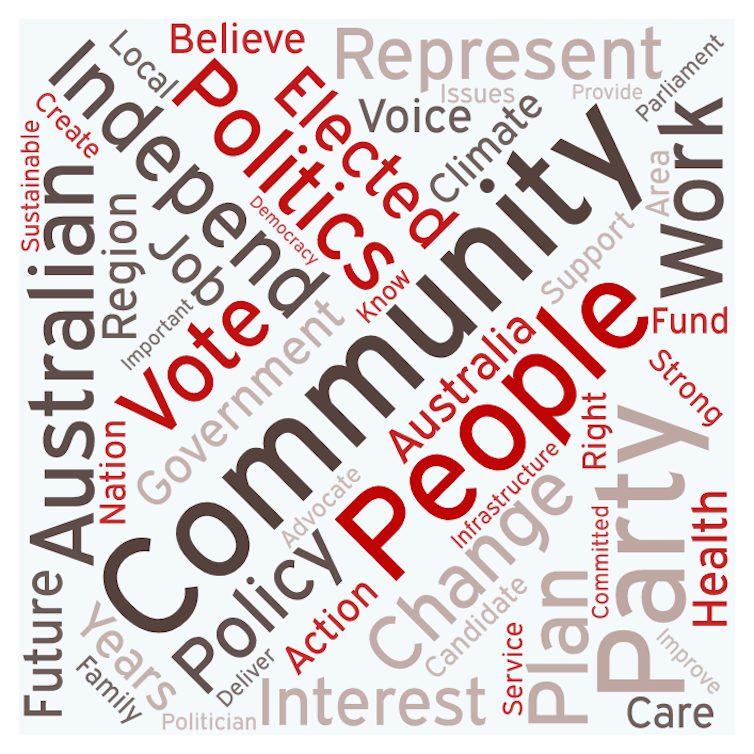 We also analysed the personal statements each independent candidate provided to smartvote to explain why they are running for office. Independent candidates overwhelmingly stressed their ties to their local community, the need to do politics differently, and the importance of climate change.

These statements echo the main arguments they are taking into the 2019 campaign – that political parties have failed Australians. They also echo the arguments in the Independents Day video. For example, Kerryn Phelps (Wentworth) starts by saying she “ran as an independent because [she’s] sick of the two major parties”, while Zali Steggall (Warringah) goes further, claiming “the time for political parties is moving on”.

To find out what else they have in common, we examined another of smartvote’s graphical tools, the “smartspider”. This tool allows voters to compare their positions with candidates and parties on six dimensions. In the animation below, we look at the profiles of eight of the “Independents Day” candidates first and then compare them with the two large parties.

Almost all the independents in our sample have a more environmentally-friendly position than the two major parties – the very message they tried to articulate in their ad. Although this differentiates them the most from the two major parties, they hardly outflank the Greens, who get the highest score on the environment. Most independents also remain far from the Greens’ positions on the economic and social dimensions.

Read more: Discontent with Nationals in regional areas could spell trouble for Coalition at federal election

That said, smartvote is unique in Australia as the only voting advice application to include independents and minor parties.

While independents did not have much success in getting elected to the lower house in 2016, more than a third of Australians voted for minor parties and independents in the Senate.

The result was a record 20 crossbenchers following the last election. With only half the Senate up for election, minor parties and independent candidates will have a harder time at this election.

We do not have to wait long to see whether more independents find themselves sitting in the House after May 18.