Why do we tell stories, and how are they crafted? In a new series, we unpick the work of the writer on both page and screen.

Former Fairfax journalist and lawyer Cynthia Banham voices the silenced pain of generations in A Certain Light, her evocative, hybrid work of docu-memoir.

In an effort to process the trauma she experienced while on assignment more than ten years ago – a plane crash over Indonesia claimed both her legs and left 60% of her body covered in full thickness burns – Banham locates her own experience within her wider family’s narrative.

Banham’s memoir was released in 2018. Her story was once again in the news earlier this year, when Eddie McGuire mocked her pre-match coin toss at an AFL game (McGuire later apologised and said his comments were not about Banham).

Her voice shifts between the investigative (she incorporates historiography, images, documents, footnotes and parentheses) and the insightful and emotional first person. Yet her journalistic attention to detail is constant. Woven together, these voices comprise her fragmentary memoir, an arduous journey into the past and ultimately, resolution. 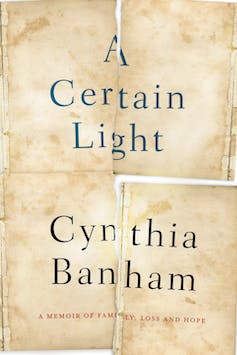 Allen & Unwin Banham says A Certain Light is written for her young son, so he will one day know about his family’s history. The book begins with an epistolary prologue that speaks directly to him, predominantly through first person but sometimes in second. We are invited by Banham into the intensely personal space of the text. She reveals to us her maternal indecision – the desire for her son to know, yet be shielded from, her trauma’s painful excesses. Banham writes: “Will you, my son, grow up with memories of your mother’s suffering, feeling that you are somehow my compensation?” The first of many rhetorical questions throughout the text reminds us of her vulnerability, and the fraught task of communicating trauma through generations. Banham’s painful telling of her rehabilitation after the crash is threaded through other, broader stories of the past, an act of deflection perhaps signifying the difficulty endured in writing about the crash itself. She retraces the trauma narratives of her grandfather, Alfredo; Alfredo’s sister, Amelia; and Banham’s mother, Loredana. She collects memories from family members across Europe, and artefacts and documents she has chosen to incorporate into the text, reflective of her own pieced-together family narrative. The images are haunting at times and lend an immense gravity to Banham’s storytelling. Connecting stories of suffering to a face or a real artefact allows the reader to explore her own empathic ties with the story. Banham finds a connection between the experiences of these relatives and her own. While her grandfather’s plight as an Italian prisoner of war in Nazi Germany is of course different to her own experience, Banham draws effective comparisons. For example, she likens her thirst immediately after the plane crash as she waited, unable to move, in a foreign hospital hallway, to the excruciating thirst felt by victims of war. In her research she encounters an image of German soldiers who had lost their legs. “War wounds”, she writes, “how did I end up with war wounds?” These comparisons show a lingering resonance of war in her mind, of the shared, transcendental suffering that connects generations. Through her mother’s story as an Italian immigrant to Australia during the 1950s, Banham connects to a deep feeling of shame – the shame of difference, of abnormality. Shame was so innate that her mother was reluctant to let the surgeons amputate Banham’s legs in life-saving surgery, for fear of what her daughter’s life might be like without a “normal” body. Banham leans painfully into her trauma in the final chapter of the book, titled Crashing. She revisits the site of the plane crash, and the days immediately before and after – the most distressing moments. 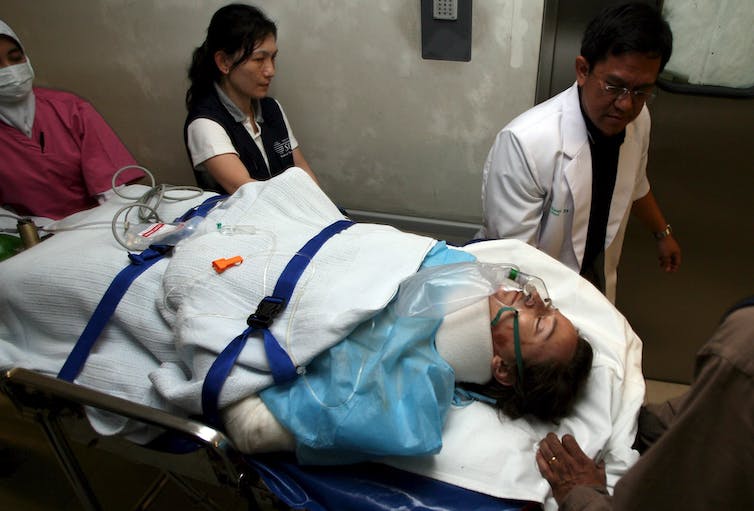 Cynthia Banham is evacuated from Sardjito hospital, in Yogyakarta, Wednesday, 07 March 2007. Weda/EPA Tension builds as she recalls a handful of details: the description of her hotel room; the clothes she chose to wear that morning (might her life be different now if she had worn pants instead of a skirt?); the trivial pre-flight conversation she had with fellow journalists about Indonesia’s air crash record. The actual recount of the crash is surreal. Banham writes: “Shit, I was thinking. Is this really happening? Then: Oh God.” On the next page: “Shit, actually, this could be it, this could be the end, maybe this is how I am going to die.” The terror Banham experienced in those moments is beyond comprehension, and yet the incredibly human, common thoughts of panic incite an immense sense of empathy in the reader. It reminds us this could happen to anyone. This is Banham’s second book – her first, Liberal Democracies and the Torture of Their Citizens, was derived from her PhD undertaken at the Australian National University several years after her accident. A Certain Light reconciles the woman she was before the plane crash with the woman who writes this text. Banham explores the fragility of memory and the shared longing to know the stories of family members who can no longer speak, or perhaps do not want to. “Memory is fluid, malleable, untrustworthy”, Banham writes, yet ultimately it’s memory that has created her narrative, her identity reclaimed from trauma. A Certain Light is a reminder that despite even the greatest tragedy, time moves on and there is light in the darkness – if we choose to see it.