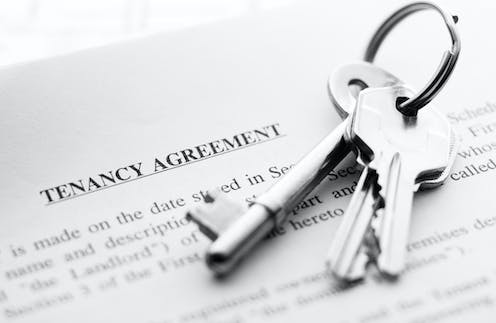 New laws in Western Australia will make it easier for people escaping family violence to “break” their leases.

The laws are “unashamedly victim-focused” – the latest development in a legal shift across Australia that seeks to alleviate the legal and financial barriers to leaving an abusive household. The WA legislation draws heavily on Canadian and US models to make the process of leaving timely and more efficient.

Under traditional laws, joint tenants are equally liable for lease expenses. If a lease is terminated early, the tenants remain responsible for expenses – including rent. Failure to comply has serious consequences, including the loss of a security deposit (often essential to find new accommodation) and “black-listing” on a tenancy database.

This places a person experiencing family violence in a vulnerable position if they need to leave. To stay is unsafe, but a victim may be unable to find a new, affordable home without being burdened by expenses arising from the previous lease.

Read more: Why doesn't she just leave? The realities of escaping domestic violence

What the new laws do

Under the legislation, tenants can end a tenancy directly with the landlord or agent with seven days’ notice. They need to provide a termination notice, along with evidence that the circumstances involve family violence.

This development is significant because, unlike in most other states and territories, a person experiencing family violence won’t necessarily have to navigate law enforcement or the court system before they can leave.

Evidence might take the form of a court order, but it could also be a declaration signed by a medical professional or other independent third party to confirm that the lease is being terminated because of family violence. A broad range of people can make the declaration, including police, psychologists, social workers or people in charge of refuges. This means the evidence can be obtained in a timely and uncomplicated way.

The tenant may leave immediately for safety, although is responsible for the rent until the end of the seven-day notice period. This means the lease can be terminated quickly and cleanly with less financial burden than there would be in the case of the usual notice period.

The legislation also provides an efficient system to address disputes about unpaid rent, property damage and the disbursement of the security bond. The aim of the provisions is to allow for financial issues to be resolved quickly and ease the victim’s pathway out of the lease. For example, a victim will not be responsible to pay for any damage caused by the perpetrator.

Removal of perpetrator from lease

Should the tenant choose to do so, the legislation allows a tenant to stay in the rented premises, but remove the perpetrator from the lease by application to the Magistrates Court.

If children are in school in the local area, for example, it’s best for a tenant to be able to remain in the rented premises. The court may make an order terminating the perpetrator’s interest in the lease after considering matters such as the best interests of any child living on the premises, or the effect the order might have on any pets kept on the premises.

A tenant can change or add locks and security devices without the landlord’s permission if the tenant believes, on reasonable grounds, that an act of violence is likely to be committed against them or any of their dependants.

This is an important development because, although some jurisdictions permit this in an emergency, generally residential tenancy laws require that a tenant must obtain the permission of the landlord prior to making any alteration. That included for locks, alarms and security screens. In some cases, there is an unacceptable, and dangerous delay in obtaining consent and enhancing security.

Legislation can be beneficial to landlords too

The new laws draw heavily on models from the US and, in particular Canada. Indeed, the WA provisions are modelled on those operating in Alberta and, although controversial to some, do not go as far as those in some jurisdictions. In Ontario, for example, a lease can be terminated through the use of an online form and a tenant’s statement about sexual or domestic violence.

Obviously, these amendments have concerned landlord and real estate representatives because of the potential to “use” the new laws as an excuse to break leases and disadvantage landlords. But evidence suggests that this type of legislation can actually be beneficial to landlords.

In Canadian provinces such as Alberta, where similar legislation has been operating for several years, there has been little to no evidence of the provisions being misused. And, in comparison to the expense of having to go through a court or tribunal process to terminate the lease in the usual way, the new process is more efficient and cost effective for the landlord.

The landlord has the certainty of knowing that the lease will be terminated in seven days, there is less risk of damage to the premises, and the property can be advertised promptly (rather than wait for court or abandonment processes). Of course, in a slow rental market there may be a delay in finding a new tenant, but, on balance, the process is likely to be beneficial to both the tenant and the landlord.

Read more: After a deadly month for domestic violence, the message doesn't appear to be getting through

The scourge of family violence touches many. Although all Australian states and territories have introduced some measures to alleviate the difficulties faced by a person wanting to end a lease because of family violence, the Western Australian provisions provide an example of best practice in balancing safety, efficiency and the interests of both tenant and landlord.