The hunt for gravitational waves is back on with the announcement overnight of the detection of signals from what’s thought to be the merger of two neutron stars, the incredibly dense remains of a collapsed star.

The signals were actually picked up on Thursday April 25 – ANZAC Day here in Australia – from a binary merger named S190425z), only the second ever neutron star merger to be observed.

The twin detectors of the Laser Interferometer Gravitational-Wave Observatory (LIGO) – in Washington and Louisiana in the United States -— along with Virgo, located at the European Gravitational Observatory (EGO) in Italy, only resumed their operations on April 1 after a year and a half of upgrades. The latest result shows hunt is back with a bang.

Read more: Signals from a spectacular neutron star merger that made gravitational waves are slowly fading away

This is the third observing run (named O3) and soon after the merger signal was detected, astronomers around the world started searching for a host galaxy, but this time there was an extra challenge.

Where is the signal coming from?

When LIGO detects gravitational waves – the ripples in space-time predicted by Albert Einstein – we can work out some information quite accurately, such as the mass of merging neutron stars.

The images (below) of all the signals detected in the first and second observing runs of the detectors (named O1 and O2) show how each signal is unique. These differences allow us to work out the masses and distances to the objects. 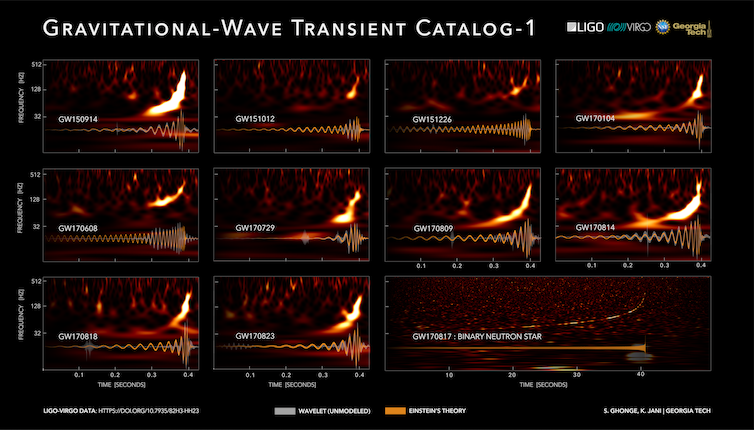 But one thing that is harder to work out is where the signal is coming from?

We do this by triangulating the signal received at the three detectors (the two LIGO detectors in the US and the Virgo detector in Italy).

For the first detection of merging binary neutron stars, GW170817, we got lucky. We were able to narrow down the signal to a region of 28 square degrees on the sky (about 140 times the area of the full Moon).

But S190425z was only detected in a single LIGO detector and Virgo, and hence the localisation region was 10,000 square degrees. That’s about a quarter of the entire sky. 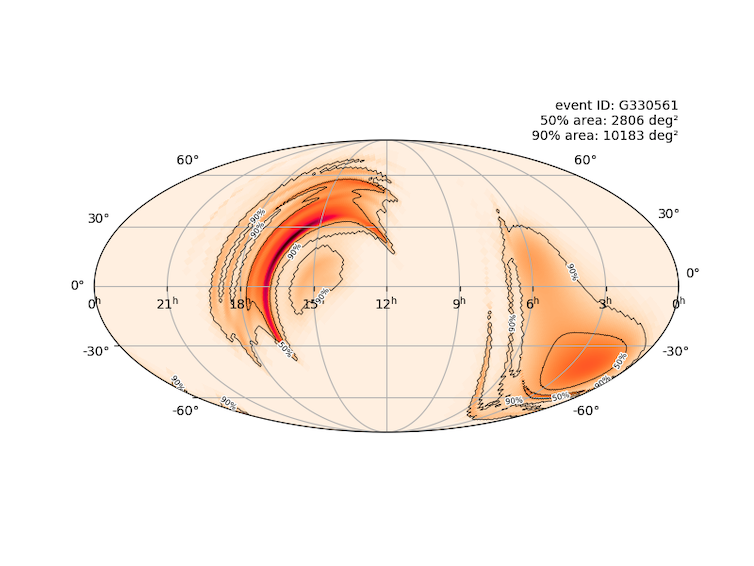 LIGO localisation for the neutron star merger S190425z. The area covers about a quarter of the entire sky. LIGO

The neutron star merger is also estimated to have happened about 500 million light-years away from Earth.

Needle in a haystack

Astronomers around the world, including Australian teams, have been using telescopes from the outback of Western Australia to The Canary Islands in the Atlantic Ocean, to search for possible counterparts: galaxies that could be hosting the neutron star merger.

To do this we had to work out which of the 45,000 possible galaxies in the region would be the most likely hosts.

No confirmed matches have been found, so far, but on the way, we’ve found lots of other interesting events such as new supernovae - the explosions that occur when massive stars die.

This effort is an integral part of the Australian gravitational-wave hunting team at OzGrav. OzGrav supports more than 100 scientists and engineers who are making critical contributions to improving LIGO instrumentation, data analysis software, and interpretation of the results.

How far can LIGO see now?

The recent upgrades of LIGO and Virgo mean astronomers can now detect gravitational waves from binary neutron star mergers further than ever before, up to 500 million light years away.

Any signals we detect from these distant mergers would have left their host galaxy around the time the first fish evolved on Earth (two hundred million years before dinosaurs came along).

Every second counts when astronomers are trying to use gravitational wave triggers to capture the last moments as neutron stars collide.

The team at the University of Western Australia node of OzGrav has developed a real-time search program (called “SPIIR”) to trigger gravitational waves from the LIGO-Virgo data within ten seconds.

The team has already identified four gravitational-wave candidates, and in the future it may even be possible to eventually alert astronomers before the emission of any light from a merger.

An important part of the LIGO O3 upgrade was the installation of instruments called “quantum squeezers”, designed by OzGrav scientists at the Australian National University.

One of the most significant engineering challenges in building LIGO is reducing noise that can drown out the miniscule gravitational-wave signals. This noise comes from many different sources, such as seismic noise from earthquakes, ocean waves and even vehicle traffic.

Another source of noise is quantum noise, due to the discrete nature of light. The squeezers dampen this quantum noise by changing the quantum properties of the light used by LIGO to detect ripples in the fabric of spacetime. 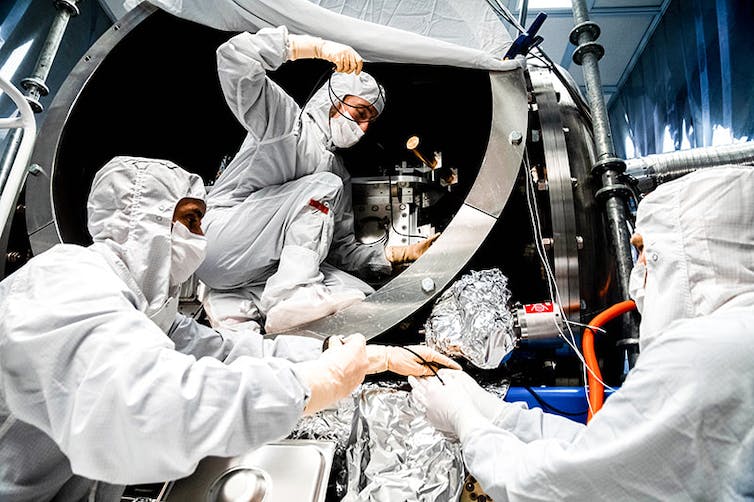 With the third observing run now well underway, we’re already seeing the results of these improvements to LIGO instrumentation and software.

Read more: How we found a white dwarf – a stellar corpse – by accident

In addition to the technical improvements there’s another marked contrast with previous observing runs: all detections are being released to the astronomy community, and the wider public, straight away.

In the midst of the excitement about S190425z there was another gravitational-wave alert a day later - a candidate signal with properties that suggest it could be a merger of a neutron star and a black hole.

This was picked up by all three detectors but as yet we also have no host identified for this, so we are not yet sure of the nature of this event. But it’s another hint of the exciting results yet to come.