When visitors first enter the exhibition Tudors to Windsors: British Royal Portraits at Bendigo Art Gallery, they are greeted with soaring sounds of coronation anthems. These genteel songs entice patrons into an exhibition that is ultimately conservative in both content and style.

The exhibition opens with portraits of Henry VIII, whose long-term legacy is difficult to deny. Printed on the first main wall is the memorable, yet reductive, children’s rhyme “divorced, beheaded, died, divorced, beheaded, survived”. Viewers are quickly drawn into the Crown and court’s power, and the brutality and risk that was associated with being married to Henry VIII. 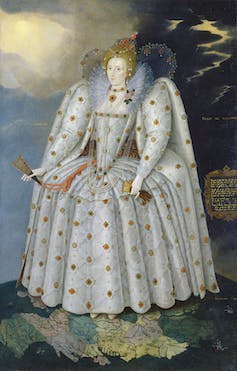 Best viewed by standing between the portraits of his wives Anne Boleyn and Katherine of Aragon is the first of many two-sided timelines, linking significant moments in the United Kingdom’s history to world events. This suggests that the British monarchy should be understood as a politically powerful force.

It soon becomes clear that this is an exhibition seeking to represent the Empire as a “Great Power”. The two and a half metre “Ditchley Portrait” of Queen Elizabeth I (1533-1603) illustrates a towering, divine force.

In this highly symbolic work, Elizabeth stands on a world map, her feet firmly planted on Oxfordshire. We see that she was the great hope of her people at the time – a stormy sky is swept away into oblivion by the sunshine that only this Queen can bring.

The sections on the Stuarts (1603 to 1714),and the Georgian period (1714-1837) are dominated by similar formal portraits, but the curators are obviously wary of contemporary viewer fatigue. The chamber music fades and extravagant portraits disappear as patrons enter the 18th century era of “Empire and Exploration”. It is here that we see this is truly an exhibition adhering to an romanticised narrative of monarchy.

An introductory note explains that The Crown supported three expeditions led by Captain James Cook during the 1760’s and 1770’s “in search of an undiscovered continent in the Pacific Ocean”. It is a great disappointment to see this choice of wording, which erases the significant political issues of Australia’s colonisation.

Had the exhibition acknowledged contemporary historical discussions in Australia, delivering on the curator’s promise to illuminate “key figures and important historical moments”, there might have been a more inclusive and engaging narrative. 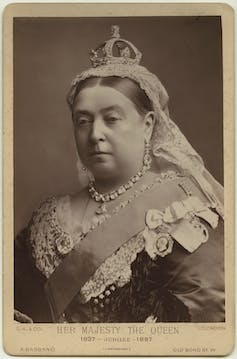 Instead, we move on to a new era of portraiture and monarchy. The advent of photography during Queen Victoria’s (1819-1901) reign provided a new style of intimacy, and a substantial series illustrates her life as both a woman and the British Queen that “reigned but never ruled”.

Critical examination of these images disrupts the romantic representation of this family. Most striking is a carbon print produced by John Jabez Edwin Mayall (1863) illustrating the Queen with her daughter-in-law, Alexandra, on the latter’s wedding day. Here, Alexandra stands over the seated and heavily cloaked Queen Victoria.

Rejecting the demands of the photographer’s lens, her audience, and her daughter-in-law, Victoria instead gazes at a marble bust of her late husband. The idealised representation of a unified family is somewhat disrupted as we are offered the stark black and white image of a mother turning her back on her child on their wedding day, no less. 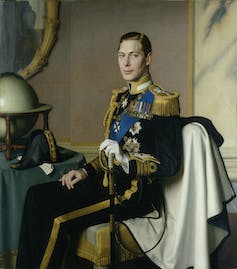 Reaching the age of the Windsor family, beginning with George V in 1917 and continuing today, patrons are invited to walk under a glorious chandelier to peruse photographs, film clips, paintings and display cases containing riding gloves and dresses.

These items are enchanting, but there is no sense of the glorious political or military power as displayed in the rooms of the Tudors, Stuarts and Georgians.

Rather, we see the continuing evolution of the monarchy’s “soft power”: images from popular women’s magazines adorn the walls, illustrating a monarchy with significant popular culture influence, but little else.

The complexity of this position is superbly indicated in portraits concerning Queen Elizabeth II. A 1971 print by Patrick Lichfield shows a delighted regent relaxed, clapping, after a formal dinner. This rests in sharp juxtaposition with Chris Levine’s (2007) holographic portrait, “Lightness of Being”, of a crowned Elizabeth II. In this image, artist Levine states, there is “an aura about it, a power”.

Perhaps this moment captured a monarch working hard to continue a long tradition of conveying, through art, a sense of remote authority to an adoring public.

In Tudors to Windsors, through various forms of portraiture, visitors see the monarchy’s transition from a male dominated, politically powerful institution to the celebrity status of more recent female reigns. An unexpected highlight of the exhibition is the history concerning artistic technologies relative to portraiture.

Yet patrons should be aware this is an exhibition that does not apply a critical gaze to the British monarchy. Consequently, idolised images reign.

Tudors to Windsors: British Royal Portraits is at Bendigo Art Gallery until July 14.