Editor’s note: This is an updated version on an article that was published in 2016 when the new Senate voting rules were first introduced.

The voting system for the Australian Senate combines both preferential voting and proportional representation counting.

This system produces an upper house comprised of eight electorates (six states and two territories), each represented by multiple senators. As a group, these senators much more fairly represent the diversity of opinions in their electorates than the system in the lower house, where each of 151 electorates is represented by only a single member.

The key features of Senate voting

So, what do Australians need to know when they go to vote to choose their senators in this year’s federal election?

The order is important because the chance of a candidate being elected decreases the later his or her name appears in that order of priority.

The instructions on the ballot papers will tell you that a valid above-the-line ballot will show at least six party boxes, numbered 1 to 6, for at least six party groupings. However, your vote will have potentially more effect if you number more boxes.

In the example below, if you put a “1” in the Liberal box, the first Liberal to gain from your vote will be Malcolm Turnbull, then secondly Alexander Downer, then Tony Abbott, and so on. If you are a Liberal voter that wants to put Tony Abbott first, you can do this, but you have to vote below-the-line (read on for how to do that).

The example we show here is a formal (valid) vote that places the major parties last. This voter supported first the “Climate Sceptics”, but then ranked other minor parties and then the larger parties in the order: Liberal, Labor, Green. 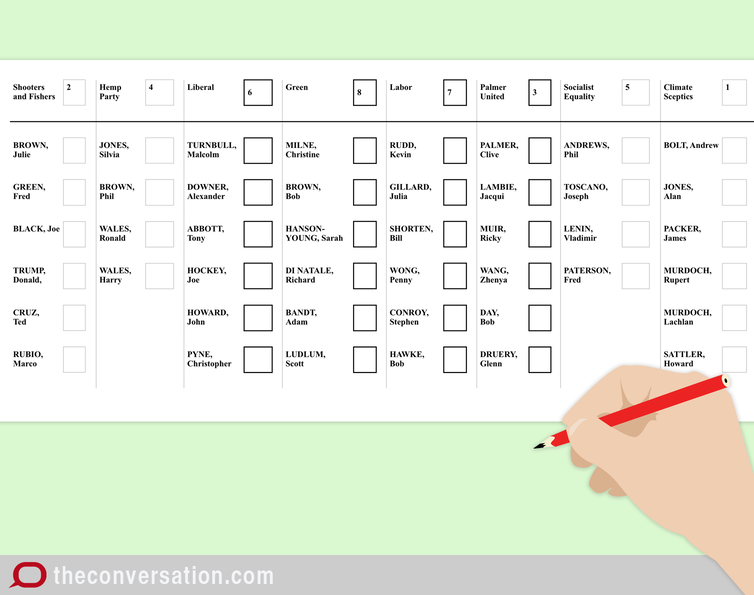 It could happen that when this voter’s preferences are finally transferred, all the candidates for the first six parties chosen had been elected or excluded. Their vote is then used to help decide the final contest, between Labor and the Greens – in this case favouring Labor. But if the voter had not numbered all the boxes, their vote would have become exhausted: in other words, not further counted towards the election of a candidate.

An above-the-line “vote savings provision” means that even if you mark only one box, your ballot will still be counted. But (for example) if you had marked “1” in the square for Climate Sceptics – and only that square – and the Climate Sceptics candidates had failed to get enough votes to remain in the count, your ballot would have become exhausted, meaning your vote did not count towards electing a senator.

That is why it is best to number as many squares as possible.

Below-the-line voters rank individual candidates in the order such voters prefer. You will be instructed to number at least 12 boxes below-the-line.

Suppose you are a Liberal voter, but you don’t like the order of the Liberal candidates on the ballot paper. You may number the boxes of the six Liberal candidates in any order – provided the numbers are sequential and each numeral is different. 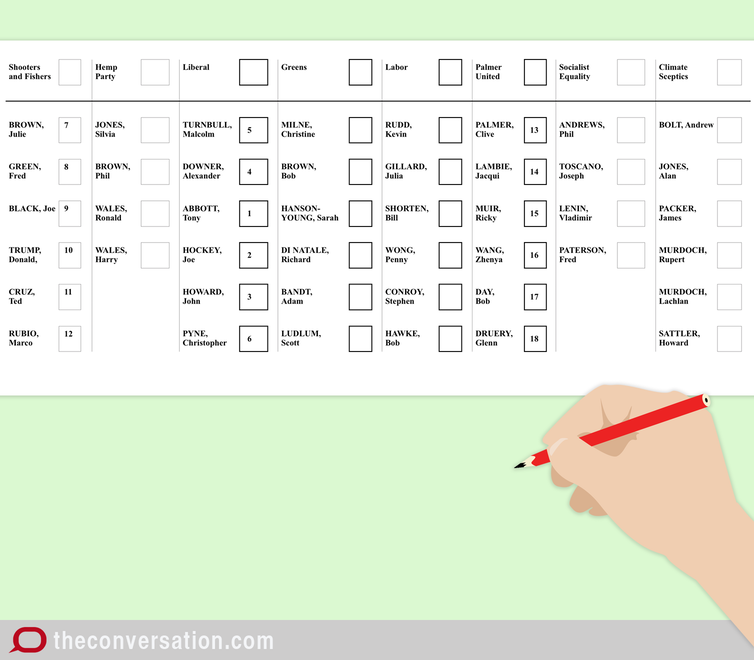 Suppose you want to support particular candidates from different parties – and want to rank Penny Wong, Sarah Hanson-Young and Jacqui Lambie ahead of all the other candidates. You may certainly do that – again provided your ballot includes 1 to 12 and those preferences are sequential. 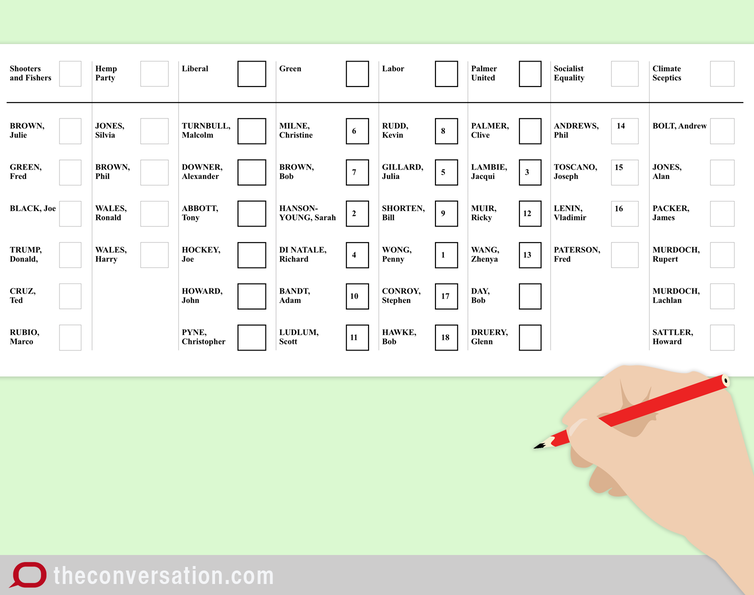 You might want to rank everyone except the main parties first. Let’s say that you also prefer the Hemp Party and Socialist Alternative first, but then want to vote for the Shooters and Fishers. If you then think Labor is the least bad of the main parties, the best way to use your ballot is to preference all of the small parties’ candidates and then Labor’s. That way, even if all the smaller parties’ candidates are excluded from the count, your next choice gains the value of your vote.

Note that you can rank the candidates of a particular party in any order. In the example below, the voter prefers Donald Trump to the other Shooters and Fishers candidates.

The more genuine preferences you express, the more likely a candidate you favour will be elected rather than one you disfavour. 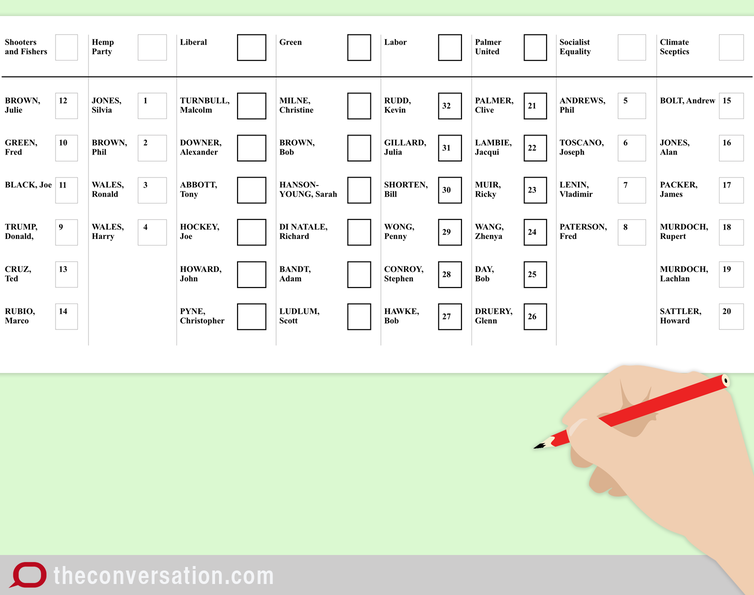 Your vote is most effective when you express as many preferences as you can or want to – either below or above the line.