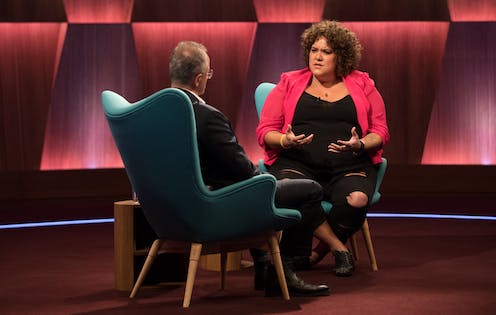 Australian singer-songwriter Casey Donovan opened up again last night about the six years she thought she was involved in a relationship with a man she never met, someone called “Campbell”.

The Australian Idol winner told the Andrew Denton: Interview show, on Channel 7, how she was a victim of catfishing – a cruel hoax in which someone creates a false identity to play on the romantic emotions of a person by pretending to be someone they’re not, either online or, in Donovan’s case, over the phone.

“Hope kept me there,” she told the program. “To think that no-one could actually do that to another human being and to think of all the shit I’d already encountered in my life, to be at that point and to […] just have everything fall apart, it really hurt.”

Read more: The abuse tactics fraudsters use to break the hearts and wallets of those looking online for love

Donovan has spoken about her case before and there are many others who have been catfished – just do a quick search of YouTube.

There are some similarities between catfishing and online romance fraud, something I’ve been involved in studying for more than ten years.

So is there anything we can do to avoid being deceived by both?

They play with your heart

My research on romance fraud has focused on the use of online deception to destroy both the hearts and wallets of victims worldwide.

Latest figures on romance fraud in Australia show victims lost more than A$24 million in 2018 cases reported to ScamWatch, run by the Australian Competition and Consumer Commission. About A$19.5 million were loses reported by women.

While catfishing arguably uses the same types of deception and manipulation as romance fraud, the ultimate end goal is different. Those who catfish others online usually don’t have a financial motive.

Unfortunately, there are no known statistics on the prevalence of catfishing, so the extent of this type of victimisation is largely unknown.

While the statistics on romance fraud are problematic – the 2018 ScamWatch figure is up $4.1 million on the year before – it is still officially recognised as a form of fraud and a legitimate form of victimisation.

Catfishing itself is not a crime. It is only the deception associated with it that can be classed as fraud, and is therefore criminal.

Adbelmalek was also a catfish.

In her case she took on the persona of Australian actor Lincoln Lewis to deceive several women online. The depth of her deception and the extent of her harassment and ongoing threatening behaviour to her victims tragically resulted in one of her victims taking her own life.

Abdelmalek is to be sentenced in June.

The sense of violation and betrayal is common across both romance fraud and catfishing.

In romance fraud, it is termed the “double hit” of victimisation, whereby the emotional loss is actually more severe and traumatising than the financial loss itself.

This same sense of emotional harm is evident in the case of those who are catfished.

The same issues around acknowledgement of victimisation and reporting are consistent. Many victims likely do not ever realise they are involved in a relationship with someone who doesn’t exist or who has been lying to them.

If they are aware, it is also likely that many do not report or disclose to family or friends. The level of embarrassment, shame and stigmatisation experienced by victims is likely to be similar.

The techniques used by catfish are similar in many ways to what we know about romance fraud.

The same social engineering techniques, the same grooming process that seeks to develop trust and rapport with the victim. The same level of patience used by offenders to maintain the ruse for weeks, months, and even years in the case of Donovan.

Nobody sets out to be a victim of online deception, whether it is catfishing or romance fraud. These perpetrators identify a weakness or vulnerability in a potential victim, and exploit this by whatever means necessary.

Why do people catfish?

There is limited research as to why individuals engage in online deception, across both catfishing and romance fraud. For romance fraud, there is a strong argument that offenders are motivated to defraud victims for financial reasons.

There is also emerging links of romance fraud to global organised crime networks.

But this does not hold for catfishing. Rather, the small amount of research that explores the reasons fuelling catfish activities, link to a perpetrator’s feelings of loneliness, low self-esteem, escapism, and a desire to explore their sexuality through a different persona.

These are all focused on the offender themselves, rather than being concentrated on any victim characteristic.

Given the extent of the harm incurred by online deception, it is imperative to gain a better understanding of the factors which motivate those behind both romance fraud and catfishing.

How not to get caught in a scam

Online deception is difficult to guard against. How can you convince someone that the person they are in love with is not real?

In the case of romance fraud, all prevention messages revolve around the inevitable request to send money. But in the case of catfishing, this message is redundant.

But there are similar signs to look out for. A refusal to meet in person or sometimes to communicate via other social media platforms. Inconsistencies in the stories used by those who perpetrate these acts. A gut feeling that something is not quite right.

On the US television documentary series Catfish, hosts Nev and Max use a range of techniques to try to find the real identities of those who are behind the online catfish.

Sometimes, a simple reverse image search on pictures used by the catfish may provide answers.

Ultimately, looking for love or friendship online comes with risk, in the same way that driving to work each day carries with it an understood level of risk.

But we should not disengage from social media or communicating online. Instead, we need to take precautions to reduce the likelihood that we become victims to online deception, in the form of either catfishing or romance fraud.