Almost 30 years ago, the specimen of a weird tree collected in the southern part of Kakadu National Park was packed in my luggage. It was on its way to the mecca of botanical knowledge in London, the Royal Botanic Gardens Kew.

But what was it?

With unusual inflated winged fruits, it flummoxed local botanists who had not seen anything like it before. To crack the trees identity, it needed more than the limited resources of the Darwin Herbarium.

Later, we discovered a fragmentary specimen hidden in a small box at the end of a little-visited collection vault in the Darwin Herbarium. And it had been sitting there quietly since 1974.

Most of the specimens inside this box just irritate botanists as being somewhat intractable to identify. This is what’s known as the “GOK” box, standing for “God Only Knows”.

Together with the resources of Kew Gardens, the species was finally connected with a genus and recognised as a new species.

A year later, it was named Hildegardia australiensis. 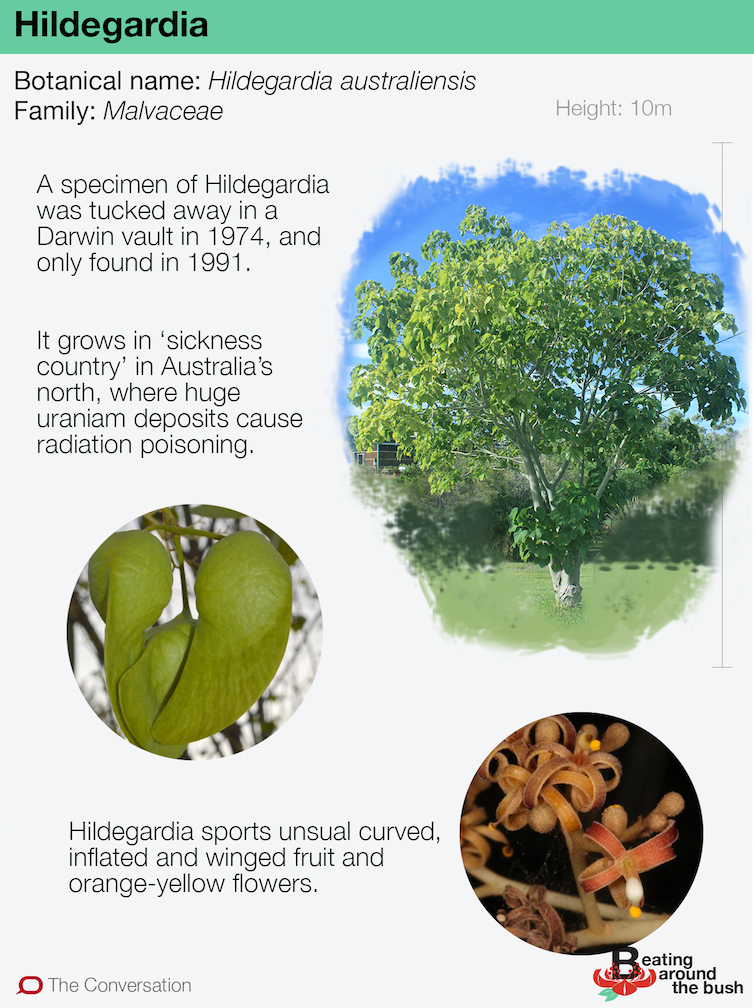 The Conversation Mysterious global distribution The species is the only Australian representative for an international genus, Hildegardia. Under Northern Territory legislation, it’s listed as “near threatened”, due to its small numbers and limited distribution. The genus Hildegardia was named in 1832 by Austrian botanists Schott and Endlicher. They named it after Hildegard, the eleventh-century German abbess and mystic, the “Sybil of the Rhine”. The genus retains some of this mystical and elusive nature. It’s rare with small isolated populations, traits that seem to dominate for all bar one of the species in the genus. Twelve species of Hildegardia are recognised: one from Cuba, three from Africa, four from Madagascar and one each from India, the Philippines, Indonesia and Australia. This bizarre global distribution is even more unusual in that almost the entire generic lineage seems to be verging on extinction. The Australian species fits this pattern of small fragmented populations and, despite being a reasonably sized tree at up to 10 metres tall, remained unknown until 1991. 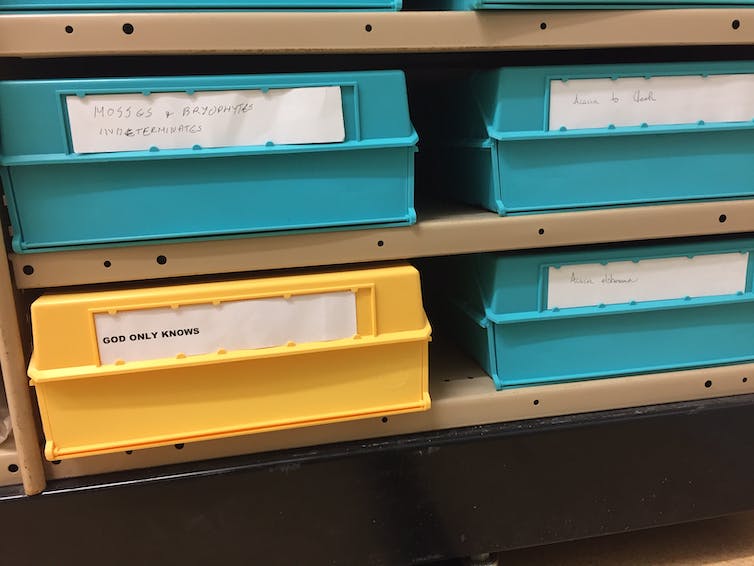 God only knows what unidentified specimens are in this box. I.D. Cowie, NT Herbarium, Author provided (No reuse) Rarely seen and hard to find Generally, Hildegardia species are tall, deciduous trees of well-drained areas, often growing on rocky hills. Their trunks have a smooth, thin bark which smells unpleasant and exudes a gum when wounded. Most species have heart-shaped leaves and bear a profusion of orange-red flowers when leafless. These are followed by strange, winged fruits with one or two seeds. Hildegardia australiensis would have to be one of the most rarely seen trees in Australia in its natural habitat. It is native to the margins of the western Arnhem Land Plateau with scattered populations on limestone and sandstone scree slopes. These are all difficult locations to visit, so if you really want to see it, a helicopter is recommended. Fortunately it is easy to grow and has found its way into limited cultivation. Several trees have been in the Darwin Botanic Gardens since the early nineties and a few are known to have been planted in some of the urban parks in greater Darwin. The plantings have been more to showcase a rare and odd-looking tree rather than any great ornamental value. Growing on ‘sickness country’ In the NT the tree is so poorly known that it has no common name other than the default generic name of Hildegardia. It appears to have no recorded Indigenous uses, which is perhaps not surprising as much of its distribution is in “sickness country”. 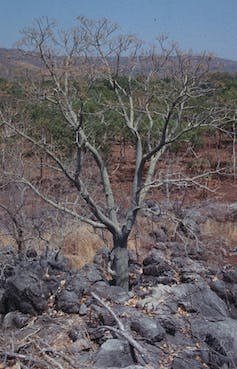 Hildegardia australiensis often grows in rocky fields. I.D. Cowie, NT Herbarium, Author provided (No reuse) This is country with uranium deposits, and was avoided by the traditional owners. Rock art showing figures with swollen joints has been interpreted as showing radiation poisoning. But it does have one claim to fame. A heated debate between conservationists and miners was sparked during a proposed development of the Coronation Hill gold, platinum and palladium mine in Kakadu National Park. The main population of H. australiensis is only a stone’s throw from Coronation Hill and the species became one of the key identified biodiversity assets that could have been threatened by development of the mine. The area around Coronation Hill, or Guratba in the local Jawoyn language, is also of considerable spiritual significance to the Jawoyn traditional landowners and forms part of the identified “sickness country”. A creation deity, Bula, rests and lays dormant under the sickness country and should not be disturbed. Eventually, these concerns culminated in the Hawke government on June 17, 1991 to no longer allow the mine development. Read more: The Price of God at Coronation Hill So are the seeds edible? While there appears to be no known uses of the Australian species, the tree may have hidden potential. The closely related trees Sterculia and Brachychiton are well known as bush tucker plants and good sources of fibre. The local Top End species Sterculia quadrifida, for instance, is commonly known as the Peanut Tree and is a highly favoured bush tucker plant. The fibre potential of H. australiensis is being explored by internationally acclaimed Darwin-based papermaker, Winsome Jobling. Cyclone Marcus whipped through Darwin in 2018 and one of the casualties was a planted tree of H. australiensis in the Darwin Botanic Gardens. 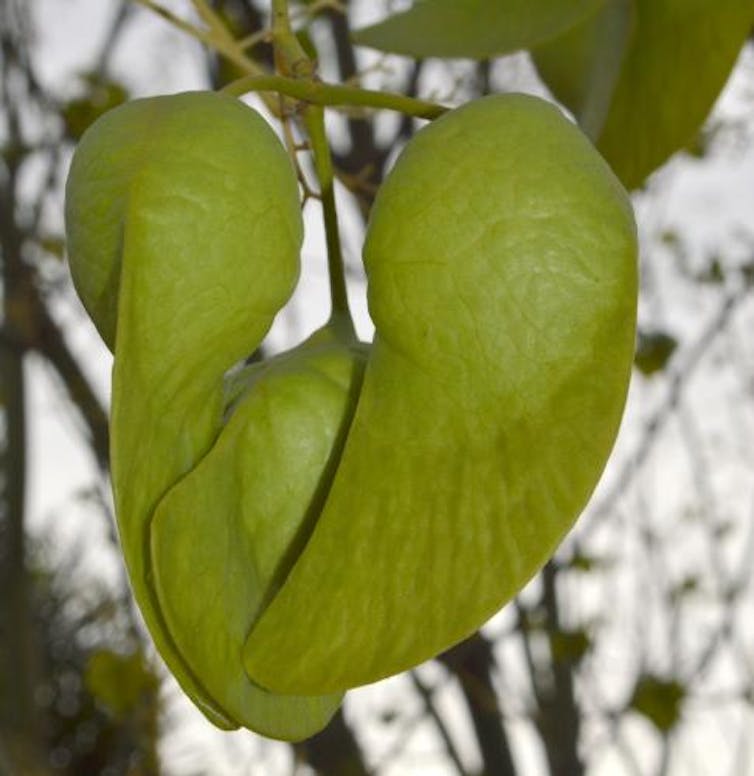 The strange winged fruit of Hildegardia australiensis. I.D. Cowie, NT Herbarium, Author provided (No reuse) Thankfully, material was salvaged. Winsome has material stored in her freezer awaiting extraction and processing to see what the fibre potential is. H. barteri, an African species in the Hildegardia genus, has a broad distribution through half a dozen African countries. And the West African locals have a number of uses for it, from eating the seeds to using the bark as fibre for ropes. But we don’t know just yet if the flesh or seed in the Australian species is edible. Whether the Australian species might also harbour such useful properties still awaits some testing and research. Fortunately, with the creation deity Bula watching over the natural populations the species, unlike many of its close relatives, appears secure in the wild.