Indonesia’s President Joko Widodo (known as “Jokowi”) looks poised to win another five years in office by a convincing margin.

Official results from Wednesday’s election won’t be released by Indonesia’s General Elections Commission (KPU) until 22 May, but the usually reliable “quick count” results produced by six private polling groups suggest Jokowi may have won by as much as 10% of the vote (54% to 45%). This is hardly a surprise, as polling in the months leading up the vote never had his lead lower than double digits.

This is the second election defeat for former general Prabowo Subianto, who also ran against Jokowi in the last presidential race in 2014. It is also likely the end of Prabowo’s aspirations to follow his former father-in-law, Soeharto, the authoritarian ruler of Indonesia for three decades, to the Presidential Palace. But that doesn’t mean Prabowo will go quietly.

For weeks, he has claimed the elections were rigged, alleging widespread fraud. He has called on his supporters to take action if he loses, saying they should be prepared to “come out onto the streets” for a month if necessary.

It is certainly true that there have been problems with this election, but that was always going to be the case.

When the Constitutional Court ruled that Indonesia’s presidential election had to be held simultaneously with local, provincial and national legislative elections this year, it imposed a huge burden on the hardworking KPU. On Wednesday, 193 million eligible voters were asked to choose from over 300,000 candidates from 16 parties for 20,528 seats across 34 provinces and more than 17,000 islands.

Under these circumstances, it would have been surprising if there were no irregularities. Among the allegations being levied by Prabowo’s campaign have been manipulation of the electoral rolls, millions of “ghost voters”, ballot box stuffing and widespread attempts to buy votes with cash and gift handouts.

As in previous elections, many of these allegations will end up in the Constitutional Court. This is where Prabowo is expected to file a challenge to reverse the result of the presidential ballot, just as he did, without success, in 2014. The nine judges on the court will probably be overwhelmed by hundreds of cases, and the chief justice has warned they will not be decided until early August at best, with legislative disputes given priority over the presidential ballot.

But it is unlikely the court will end up sending Prabowo to the palace. The margin of victory looks too big to be overcome by challenging voting irregularities.

So why bother sending his supporters into the streets? The answer probably has lot to do with the real struggle for power that begins today. 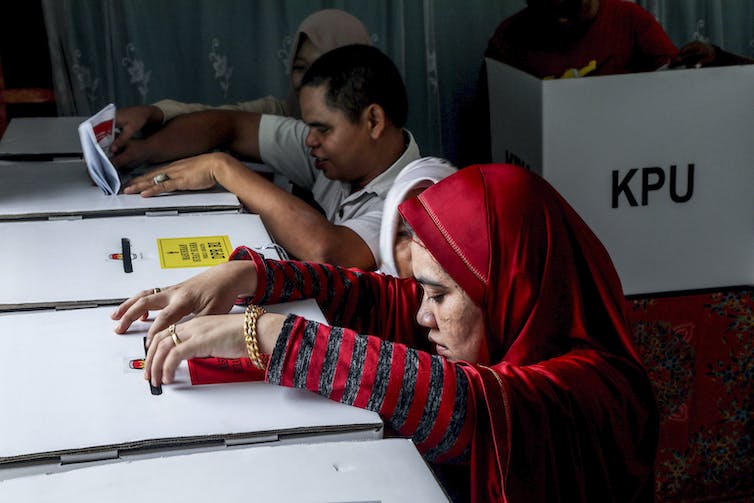 As with past elections, this year’s vote was plagued by allegations of irregularities. Dedi Sinuhaji/EPA

Jockeying for positions in the new administration

Indonesia has a political system that loosely resembles America’s, in that the president appoints his cabinet from outside the legislature. But in Indonesia, the ministries have traditionally been treated as cash cows to be milked.

Jokowi, who has proved utterly pragmatic as a politician, will have no choice but to spend the next few months negotiating the allocation of ministries with the powerful oligarchs who wield great power and influence in Indonesia’s corrupt political system. These include hugely wealthy businessmen, some of whom “own” their own political parties, or control major media groups - or both. They will want to recoup their investments in the election campaigning, plus profits.

These negotiations will be complicated by the fact that, once again, no party looks likely to win an outright majority in the legislature. A governing coalition will somehow have to be pieced together, with political threats neutralised by offers of positions of power in the legislature or administration. A lot of minor parties have failed to meet the new higher threshold for seats in the legislature, so how all this will play out is unpredictable.

But Jokowi will likely end up brokering a broad legislative alliance. Just as in his last administration, and former President Susilo Bambang Yudhoyono’s administration before that, the Cabinet will probably be largely filled by proxies of oligarchs and powerful politicians. There will likely only be a few lonely technocrats to bear the burden of policy making.

Prabowo and his party, Gerindra, know the haggling has already begun, but they are in a difficult position. According to the “quick count” results, Prabowo looks certain to lose again, and although Gerindra is poised to come in second in the national legislature, it scored just under 13%, well behind Jokowi’s party, the PDI-P, with 20%. 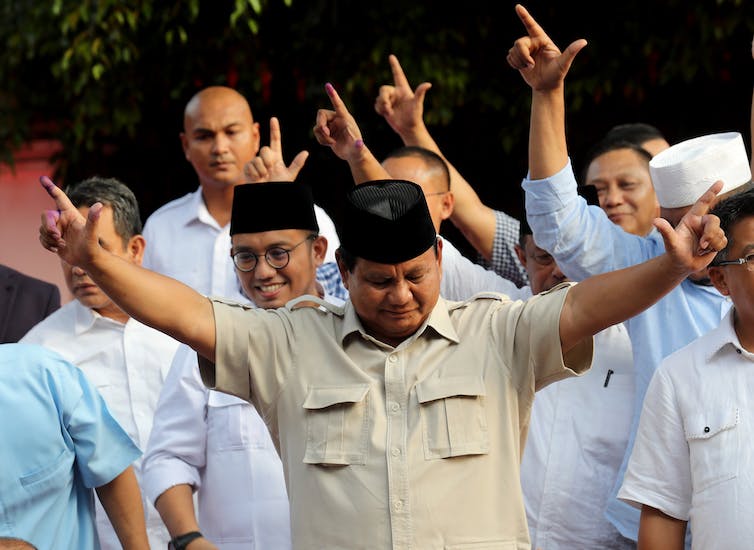 Prabowo and Gerindra’s campaigns have also drained vast sums from the personal fortunes of Prabowo’s family and his vice-presidential candidate, Sandiaga Uno. Gerindra’s second place finish in the legislature is about the only political capital Prabowo has left – unless, of course, his die-hard supporters are marching in the streets protesting Jokowi’s victory.

This will be easy for Prabowo to arrange among his core supporters of conservative Islamists. The Islamists have strongly backed him largely because he is the only alternative to Jokowi, whom they despise as a major obstacle to their aspirations to push Indonesia in a more conservative Islamic direction. They will be all too eager to protest, giving Prabowo the leverage he wants to try to win places in the new administration for his party, inner circle and proxies.

Whether Prabowo succeeds in winning concessions from Jokowi will be another question, of course. If he does, he will eventually distance himself from the street protesters.

What does all this mean for Australia-Indonesia relations? In the final analysis, not much.

Jokowi is an inward-looking politician with limited interest in international relations. He has made it clear that it doesn’t see the relationship with Australia as “special” in the way Yudhoyono did; that is not likely to change now.

And Australia has limited clout in Indonesia. Despite our proximity, we have slashed our aid to Indonesia, are a low-ranked trading partner, and invest more in New Zealand, Luxembourg and smaller Southeast Asian nations than we do in Indonesia. We are not an important player in Indonesia’s political and economic decision-making.

Of course, the recently signed Indonesia-Australia free-trade agreement (IA-CEPA) is intended to change that by giving both countries greater access to each other’s markets. But don’t hold your breath. The agreement has yet to be ratified, and for all its rhetoric of deregulation, Indonesia remains heavily protectionist.

Read more: It's more than a free trade agreement. But what exactly have Australia and Indonesia signed?

Despite the fact that neither came close to winning a majority in the legislative elections, Jokowi and Prabowo’s parties will be important powers in the new legislature, and both are nationalist and often suspicious of foreign influence. It is by no means certain the free-trade agreement will be quickly ratified. It may well face major amendments or simply be put on hold, like a number of other international agreements inked by past administrations that still await ratification.

Like much else in Indonesia today, the outcome depends heavily on the intra-elite back-room horse-trading and deal-making that will be happening quietly behind closed doors for weeks to come, while court challenges and noisy protesters in the streets get all the attention.