There’s a lot that’s fascinating about the coelacanth Latimeria. Now under threat, this deep-sea fish is closely related to humans and other back-boned, land dwelling animals (tetrapods).

The coelacanth Latimeria is a relatively large fish (reaching about 2 metres long) but has a very tiny brain lying within a hinged braincase – a very primitive feature found in many fossil fishes.

How the coelacanth skull grows and why the brain remains so small has puzzled scientists for years. Our new study published today in Nature illuminates for the first time the development of the brain and skull of this curious animal.

It’s another piece of evidence that might help us see where humans once came from.

Read more: It's less than 2cm long, but this 400 million year old fossil fish changes our view of vertebrate evolution

Discovery of a living coelacanth

The discovery of a living Latimeria coelacanth rocked the world in 1939, as scientists thought they had died out with the dinosaurs about 66 million years ago.

The first Latimeria ever found was accidentally caught in a trawl off the South African coast. Amazingly, its overall body shape was strikingly similar to some of its fossilised relatives that had been known by palaeontologists since the 19th century.

The fossil coelacanth Trachymetopon from the Jurassic of Germany. This specimen is housed in the collections of the Museum der Universität Tübingen. Hugo Dutel (no commercial use)

The scientific frenzy around Latimeria was really sparked by what the animal could reveal about the origin of humans and other four-limbed animals.

At the time of its discovery, Latimeria held a pivotal position in the family tree of vertebrates (animals with backbones). It was considered the direct descendant of lobe-finned fishes, the group of fish from which tetrapods evolved.

So the discovery of a living Latimeria coelacanth was expected to shed light into the biology of our very early ancestors.

Nowadays, expectations have been tempered. The development of new methods for reconstructing the evolution of organisms, the discovery of new fossils, and, more recently, information extracted from DNA and other molecules have slightly changed this picture.

Among living vertebrates, coelacanths are no longer regarded as the closest relatives to tetrapods – they have been replaced by another old group of fishes, the lungfishes. 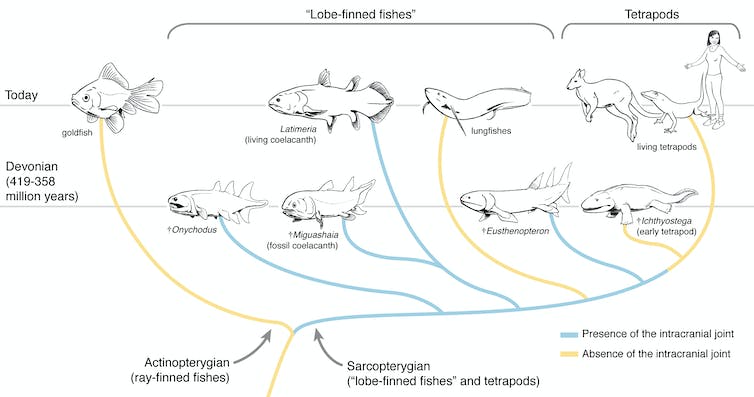 Yet, the Latimeria coelacanth possesses some unusual features that are still of interest for understanding the evolution of our fossil relatives.

The skull of Latimeria is completely split in half by a joint called the “intracranial joint”. This joint is a very primitive feature that is otherwise found only in many extinct lobe-finned fishes.

In contrast with other vertebrates, the brain of Latimeria is ridiculously small compared with the cavity that houses it (1% of the entire braincase volume).

The rear of the skull of Latimeria and extinct lobe-finned fishes also straddles a surprisingly huge structure called the notochord.

3D virtual reconstruction of the coelacanth skull in right lateral view. Left: Overall view of the skull. Right: the braincase isolated and virtually cut open along the midline to show the brain (yellow) and the notochord (green). The brain represents about 1% of the volume of the cavity which houses it. Hugo Dutel

The question of how this skull and brain develops, and what it means to vertebrate evolution, triggered our work published today.

Read more: What evolution and motorcycles have in common: let's take a ride across Australia

Latimeria is ovoviviparous, meaning that eggs develop in the female abdomen, and then she gives birth to live young.

But studying the development of this fish is not an easy thing. Latimeria cannot be bred in an aquarium, so embryos and fetuses cannot be easily obtained. Moreover, we cannot capture any coelacanths in the wild as they are protected.

Many adult coelacanths are held in natural history collections. However, earlier life stages are extremely scarce as they came from the rare captures of pregnant females. For a long time, scientists thus could not dissect these precious specimens to study their anatomy.

The growth series of Latimeria collected for our study. Hugo Dutel

So we used state-of-the-art X-ray scanning facilities at the European synchrotron and powerful MRI to visualise the internal anatomy of these precious museum specimens.

Thanks to these data, we generated digital 3D models of the skull at each stage of its growth. The detailed 3D models allowed us to describe how the form of the skull, the brain and the notochord changes from a very early fetus to an adult.

How the brain grows but stays tiny

We found that the relative size of the brain dramatically decreases during development. The brain grows, but not as much as the surrounding structures in the head.

This is is very unusual, and not seen in other vertebrates (and especially us primates, in which the brain expands dramatically during growth).

On the other hand, the notochord expands considerably to become much bigger than the brain in the adult. This is very unique, as the notochord usually degenerates in the early development of most vertebrates.

The brain (yellow) within the braincase (blue) at different developmental stages of Latimeria. Hugo Dutel

Why is the brain of Latimeria so small?

As is often the case, there is probably not a single explanation. It might be due to the way the notochord develops, and the position and function of the intracranial joint (which is probably plays a role in biting). It is also possible that the energy needed by a huge electrosensory organ in Latimeria‘s snout, the rostral organ, may come at the expense of having a bigger brain.

Together with a recent study on its lung (which has bony plates on it), these findings represent the best of our knowledge on the development of Latimeria. It remains one of our most mysterious cousins, as many aspects of its biology and ecology remain unknown.

For sure, Latimeria still holds many promising clues for our understanding of vertebrate evolution and our distant origins.

But this only survivor of a 400 million year old group and its marine ecosystem are in jeopardy and need to be protected more than ever.