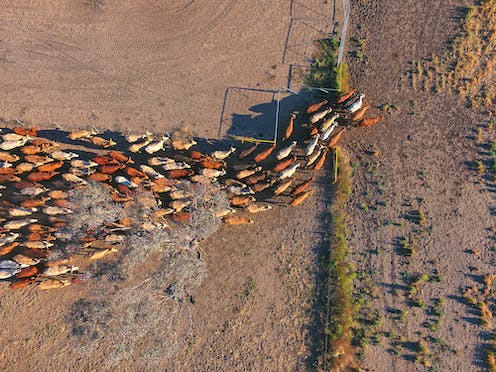 Most of us are familiar with cases of data being used in ways that go beyond consumer expectations – just think of the Facebook Cambridge Analytica scandal.

However this is also an issue relevant to Australia’s agricultural sector. Modern farms create a huge amount of data, but farmers have very little control over the collection, aggregation and potential distribution of that data.

Agricultural data collected by governments, agribusinesses and banks is regulated in a piecemeal fashion, and ends up beyond the reach of the very farmers who generated the data.

There are signs this may be starting to change.

The next day Federal Minister for Agriculture and Water Resources David Littleproud took the extraordinary step of including Aussie Farms Incorporated – a self-described animal rights charity that publishes a map of farming and animal processing locations – as an “organisation” under the Privacy Act.

Federally, we’ve done our bit – we’ve brought Aussie Farms and its attack map for activists under the Privacy Act so that misuse of personal information results in enormous fines.

This is the first time in Australia such collation and publication of farming data has been addressed with a significant legal response.

Read more: Here's why well-intentioned vegan protesters are getting it wrong

It comes at a time when the new consumer data right (CDR) is imminent. This right, soon to be enshrined in new rules developed by the Australian Competition and Consumer Commission (ACCC), will provide Australians with greater access to and control over their own data.

On April 15, the ACCC released draft CDR rules for consultation. These are in preparation for the implementation of the first phase of the CDR set for July 1, 2019. The ACCC’s rules set out how the CDR will operate including data sharing and privacy safeguards.

The decision to include Aussie Farms Incorporated under the Privacy Act and the introduction of the CDR feeds into an important conversation about governance and control of Australian agricultural data.

The value of agricultural data

This data is typically collected through the use of digital farming machinery and buildings featuring robotics and digital technologies, artificial intelligence, and devices connected to the internet (“internet of things”, or IoT).

Over the past five years, numerous reports have highlighted the myriad benefits a data revolution can bring to agriculture.

Many think this data revolution will provide an opportunity for farmers to get closer to the consumer, make farms and farmers more efficient, and provide a way for farmers to show banks how sustainable practices lower long-term risk of things like droughts and pests.

Indeed, big data in agriculture is often seen as the solution to the world’s impending food security crisis.

Perhaps not surprisingly then, recent research into farmers’ attitudes about sharing their farm data reveals their level of mistrust about the way in which that data may be used or misused. More than 60% of farmers surveyed indicated they had little to no trust in technology providers to maintain their privacy and not engage in unauthorised use of their data.

A strong future for digitally-enabled Australian agriculture needs a data governance framework. Such guidelines must encompass the legal, social and ethical rules we need to protect the agricultural sector, the interests of farmers and farmer privacy.

Within industries, anecdotal stories abound about banks and insurance companies knowing more about the incomes and businesses of farms than the individual farmers themselves.

Farmers are aware of the changing data landscape, with proposed federal government legislation on data availability and use, and the consumer data right being rolled out across industry sectors. As Shadow Minister for Agriculture Joel Fitzgibbon recently observed:

If given the opportunity, a Labor government will reform the research system and improve data availability. If we want to develop good evidenced-based policy we need more and better data.

Yet the problem is that many farmers don’t know if, and under what circumstances, they should share their agricultural data.

We argue that Australian agricultural industries need to urgently address issues such as data sharing protocols and governance arrangements. Perhaps the group best placed to coordinate such activities is the National Farmers’ Federation (NFF).

We have seen attempts to improve the position of farmers against anti-competitive practices of supermarkets through the recent re-appointment of Mick Keogh as Agricultural Commissioner to Australia’s competition watchdog, the ACCC.

But an agricultural data code of practice is just one piece of the large puzzle of how best to protect farmers and their data while maximising the potential for agriculture.

Providing guidance around agricultural data is not just about privacy, but also productivity.