While Peter Dutton is fighting for his political life in his marginal Brisbane seat of Dickson, he is being “weaponised” by Labor in its efforts to defeat two of his strongest Victorian supporters, Greg Hunt and Michael Sukkar, despite their relatively solid margins.

Last August, a clutch of Victorian Liberals including Hunt and Sukkar thought the government collectively, and in some cases they individually, would be better off with the rightwinger from Queensland as prime minister.

Greg Hunt aspired to be Dutton’s deputy. If he and Dutton had won their respective ballots Hunt, rather than Josh Frydenberg, would now be treasurer.

Instead, he remains health minister and is facing a tough contest in Flinders, made more difficult by crossbencher Julia Banks running there as an independent. Banks, the Liberal defector who formerly occupied Chisholm, was particularly angered by the overthrow of Malcolm Turnbull and has made a feature of Hunt’s disloyalty.

Sukkar, the member for Deakin, a hard line conservative who was an assistant minister before the coup and a backbencher after it, did numbers for Dutton.

On Monday Labor launched a social media campaign weaponising Peter Dutton in the fight to unseat Hunt and Sukkar in Flinders and Deakin.

The targeting is based on internal tracking research showing Dutton is especially toxic in those two seats.

In usual circumstances Deakin (on 6.4%) and Flinders (7%) should be safe. But after the November state rout of the Liberals – when the overthrow of Turnbull was a major factor and Dutton’s face had been on billboards – nothing is certain.

The Liberals think some of this anger has abated but the Victorian situation remains grim, with a number of seats at risk in a state John Howard has called the Massachusetts of Australia.

Labor has around ten seats on its “target” list for attention. While Dutton may be featured in other seats, there is less of a “hook” for him than in those of Hunt and Sukkar.

When Scott Morrison announced the election last Thursday, Bill Shorten delivered his speech later from a suburban home in Deakin.

On Monday Morrison was campaigning with Sukkar - who was anxious to leave most of the talking to the Prime Minister.

Asked how much Sukkar’s support for Dutton had contributed to the problems the government was facing in Deakin and Victoria, Morrison stonewalled: “That is such a bubble question, I’m just going to leave that one in the bubble”. 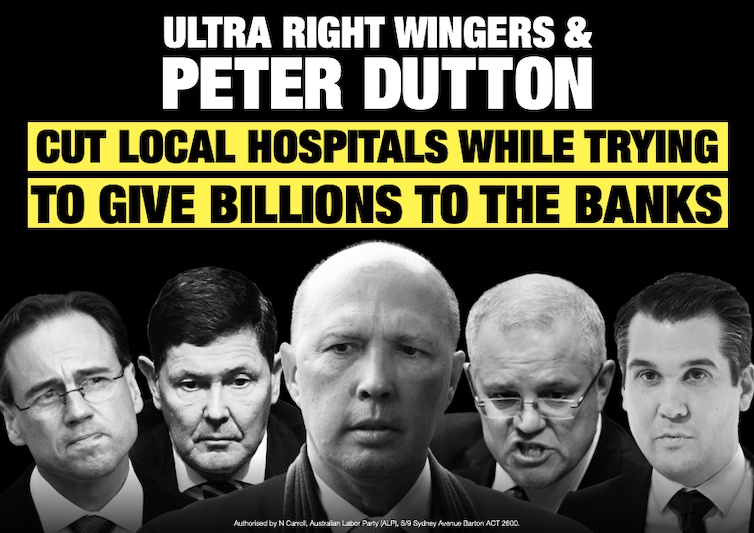 One of the Labor posters that will appear in the Victorian seats of Deakin and Flinders.

In the video Labor targets Dutton over a broad range of issues, including his support, as health minister under Tony Abbott, for a proposed $7 Medicare co-payment, which was later dumped.

His co-payment history is expected to get a wider outing in a campaign in which Labor is running heavily on health.

How much will Peter Dutton and the Liberals stand up for Victoria? Let’s check. He tried to give a $17 billion tax cut to the banks, cut $14 billion from Australian public schools

Peter Dutton was the health minister who tried to cut more than $50 billion from public hospitals and also tried to introduce the $7 GP tax. He made fun of climate change victims and voted against the banking royal commission 24 times.

And with the other right-wing Liberals he plotted to dump Malcolm Turnbull and voted to make himself prime minister, twice.Right-winger Peter Dutton for the top end of town and himself.“

There are also customised posters in Victoria featuring Dutton, especially for Deakin and Flinders.

Dutton has played into Labor’s hands in the early days of the campaign, with his remark last week attacking his opponent, amputee Ali France, for not moving into Dickson, accusing her of using her disability as an excuse.

"A lot of people have raised this with me. I think they are quite angry that Ms France is using her disability as an excuse for not moving into our electorate,” he said.

“Ali has been telling people that even if she won the election she won’t move into our electorate. She has now changed that position, but I don’t think it is credible.”

Morrison initially defended Dutton, claiming he was taken out of context and was just reflecting what his constituents had said to him.

Subsequently Dutton apologised. On Monday Morrison too had changed his tune. “Peter has made his apology appropriately. What I don’t want to see happen in this election campaign is, I don’t want to see people playing politics with disabilities. I have very strong personal views about this topic”.

Nationally, Peter Dutton will have a big footprint in the campaign. It won’t be a helpful one for Morrison.