The decision in Geoffrey Rush v Nationwide News, handed down today in Australia’s federal court, is the first – and so far, only – legal determination of a case associated with the #MeToo movement in Australia.

The defamation case was decided in favour of the actor Geoffrey Rush, who had sued News Corp’s Nationwide News,...

The decision in Geoffrey Rush v Nationwide News, handed down today in Australia’s federal court, is the first – and so far, only – legal determination of a case associated with the #MeToo movement in Australia.

The defamation case was decided in favour of the actor Geoffrey Rush, who had sued News Corp’s Nationwide News, the publisher of the Daily Telegraph, over allegations the newspaper published regarding Rush’s inappropriate behaviour with an unnamed fellow actor, later identified as Eryn Jean Norvill, who gave evidence in the case.

In finding for Rush, Justice Michael Wigney decided that the defence of truth argued by Nationwide News had not been proven. Because Wigney said Rush had suffered significant distress – and to vindicate his reputation – he set non-economic damages at A$850,000. This is more than double the cap in cases not involving aggravated damages, with further economic loss still to be determined.

The Rush decision comes as the Australian #MeToo Movement seems to have gone quiet. The high-profile cases that arose in the year following #MeToo, which included allegations against television presenter Don Burke, actor Craig McLachlan and politicians Barnaby Joyce, Luke Foley and Jeremy Buckingham, have mostly faded from public view.

Read more: Craig McLachlan, defamation and getting the balance right when sexual harassment goes to court

While reckless and sensationalist media stories certainly cause harm, the Rush decision and other defamation cases may lead someone who has experienced sexual harassment to think that the reputational interests of the accused are better protected by law than those alleging harassment.

Australia has particularly strong defamation laws, which the Rush trial has brought into sharp relief. Actress Yael Stone, who publicly raised further concerns about Rush, said that Australia’s defamation laws made her “terrified” to speak up.

Will the decision in favour of Rush have a further chilling effect on future harassment claims, especially in the absence of any successful, high-profile sexual harassment cases?

Of those few reports, most are kept quiet and out of the public view. If an incident is reported in a workplace, for instance, only a few insiders may ever know about it because of non-disclosure agreements.

Read more: We need to do more about sexual harassment in the workplace

If a harassed person makes a complaint to the Australian Human Rights Commission, he or she must go through a compulsory, confidential conciliation stage. If this is unsuccessful and the complainant proceeds to court, there are very strong incentives to settle the case privately (namely the cost and difficulty of pursuing a case).

While these layers of confidentiality and privacy may suit the harassed as well as the alleged harasser, the flip side is that it makes sexual harassment, an enormous social problem, barely known to the public. Only the tiniest number of cases make it to court and into public scrutiny.

And if women speak up publicly through social or conventional media, defamation laws come into play.

What impact will the Rush decision have on sexual harassment reporting?

An unfortunate side effect of the decision is that it is likely to have an additional silencing effect on sexual harassment discussions and reporting. Such a widely reported defamation case can only further entrench public perceptions of the risks of speaking up.

Since the court found that the defence of “truth” was not proven, this may lead to a misconception that Norvill’s statements about inappropriate behaviour were a lie. This will only be reinforced by Wigney’s statements questioning Norvill’s credibility, saying she was a witness “prone to exaggeration and embellishment”. 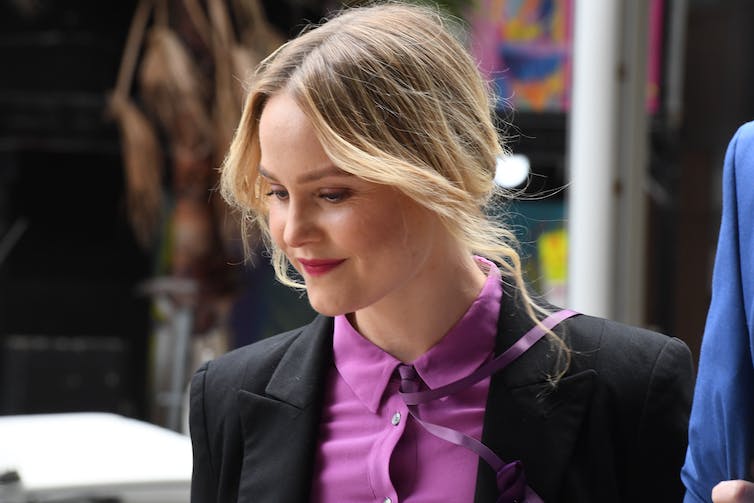 The judge said Eryn-Jean Norvill had nothing to gain from making accusations against Rush, but was not an ‘entirely credible witness’. Peter Rae/AAP

But having insufficient evidence to prove the truth of a statement in law is not the same thing as it being a lie. That misconception has the potential to exacerbate stereotypes about women making up claims of assault and harassment.

The Rush decision is a legal success for the actor, but it may have unintended side effects for the #MeToo movement and the effectiveness of sexual harassment laws.

We need the #MeToo movement to continue if we are to tackle the continuing problem of sexual harassment and gendered abuse. In delivering his summary judgement, Wigney’s comment to the courtroom is surely the truest statement of all:

… it would have been better for all concerned if the issues that arose … were dealt with in a different place to the harsh, adversarial world of a defamation proceeding.