This article is part of a series examining the Coalition government’s record on key issues while in power and what Labor is promising if it wins the 2019 federal election.

Election season means transport season: just as the recent New South Wales and Victorian elections gave us massive new transport promises, so too is the federal government relying on the enduring popularity of new roads and rail. But look beyond the rhetoric and the past three years have been largely business as usual. That leaves plenty of room for the next government, of whatever colour, to take a fresh look at how transport promises are made – and plenty of room to improve.

Last week’s federal budget committed to transport expenditure of A$7.4 billion in 2019-20, and A$33 billion over the four-year forward estimates period.

Read more: Budget transport spending is about par for the course, but the pattern is unusual

The government claims it’s spending a record A$100 billion over a decade. Yet the opposition claims: “Across the four years of this budget, Commonwealth investment in infrastructure actually falls, from A$8 billion to A$4.5 billion.” And Infrastructure Partnerships Australia says recent budgets are down on the long-term average by about A$11 billion over the forward estimates.

How much is the government actually spending?

With such polarised views, who are we to believe?

In reality, the expenditure for 2019-20 is absolutely normal. At 0.37% of GDP, it’s close to the midpoint of spending on transport under treasurers Scott Morrison, Joe Hockey and Wayne Swan. In each of the past ten budgets, annual transport spending in the year following the budget has been 0.26-0.53% of GDP.

What is different is the extent of promises that lie beyond the forward estimates period. The move to a ten-year pipeline of promises might be fine in theory, but an interested elector can rely only on what’s in the budget papers. And from that they would conclude there’s nothing unusual to see here.

Read more: $500m for station car parks? Other transport solutions could do much more for the money

A new enthusiasm for equity investments

All these figures concern grants to state governments, which are responsible for transport networks. But, in addition to these grants, the federal government has developed an enthusiasm for funding projects “off-budget”. In the past two years, the Commonwealth made equity investments of A$9.3 billion in Inland Rail and A$5.3 billion in Western Sydney Airport.

The Charter of Budget Honesty states that an investment can be treated as an off-budget equity injection only if the government has a “reasonable expectation” of recovering the investment. In other words, the entity must be expected to make a positive return over time.

But this gives governments a lot of latitude. A positive rate of return is not the same as a commercial one. And there seems little likelihood of commercial returns in either case.

For Inland Rail, it’s no secret that the Australian Rail Track Corporation will never be asked to repay the A$9.3 billion, even when project revenues start to flow in 2025. Let’s hope the finance minister is right to insist there’s no prospect the project will need even more taxpayer support, despite the risks identified in the budget papers themselves and by the Commonwealth Auditor-General. With no expectation of repayment, there is no practical difference between this “equity investment” and a grant. 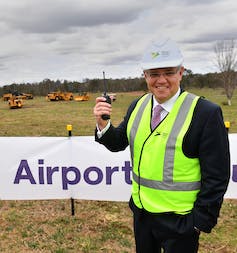 The Morrison government has invested A$5.3 billion in Western Sydney Airport while ensuring any write-down will never show up in the budget bottom line. Mick Tsikas/AAP

For Western Sydney Airport, the government decided to build the airport itself after Sydney Airport Corporation declined its right to build it. The airport operator said the offer as it stood was “deeply uneconomic”. It cited operational, traffic, financial and political risks.

So it’s hard to share the confidence of the then treasurer (and now prime minister), Scott Morrison, when he said the new airport will “generate an income stream that’s going to pay for itself”.

In both cases, if a future government ends up writing down the fair value of these assets, this will appear on the balance sheet as a change to “other economic flows”. It won’t be separately identified. Nor will the write-down show up in the underlying cash balance figure that the media spotlight highlights on budget night.

The unavoidable conclusion is that pushing transport spending off-budget seriously diminishes not only the discipline that comes from competing for funds through the budget process, but also transparency in how public money is being spent.

A foray into road pricing is stillborn

In November 2016 the government took an unusually bold step: it committed to holding an inquiry into road-user charging. The then minister for urban infrastructure, Paul Fletcher, was in good company. His commitment to commission a review led by an eminent Australian was in response to a 2016 recommendation from Infrastructure Australia, which invoked a similar recommendation in the 2015 Harper Review of competition policy, which in turn referred to a 2014 Productivity Commission recommendation. And the backdrop to all these reports was a recommendation of the 2010 Henry Tax Review.

An inquiry is no more than an inquiry, but a non-inquiry is a commitment to the status quo. Roads funding and roads investment are serious topics, and many commentators have argued that they are the laggards of regulatory reform.

A change to how road use is funded could significantly alter which roads are funded, what maintenance is done, and how networks are managed. It appears to have been all too much for this government. This task awaits a future government.

Read more: Delay in changing direction on how we tax drivers will cost us all 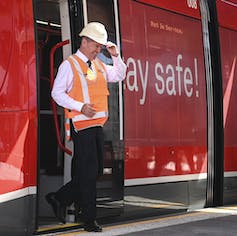 Labor’s promises on proper assessment of projects and business cases before investment decisions are made are welcome. Lukas Coch/AAP

The alternative government’s most important promises aren’t the sexy ones about electric vehicles. They are Labor’s promises that Infrastructure Australia should assess projects before the decision to invest, and to release assessed business cases. These promises may sound worthy and a little dull, but in reality they are big and welcome commitments.

Less obvious is how to square them with federal Labor’s promise to advance high-speed rail, or the promise to work with the Victorian premier “to deliver the visionary Melbourne Suburban Rail Loop”. Both of these are massively expensive projects with nothing approaching an assessed and publicly available business case.

It would be a significant improvement if whichever party wins government next month were to commit to, and follow through on, careful assessment of transport gaps and problems, consideration of the various feasible solutions, and rigorous evaluation of the preferred approach. And it’s not enough just to do this; it should be done in public.

Read more: Missing evidence base for big calls on infrastructure costs us all