Christchurch has a challenging new aspect to its identity. The city is now inextricably associated with the March 15 mass shootings at two mosques. So how does a city come to terms with and recover from having its name become synonymous with and coloured by such an atrocity?

This event has impacts on how both outsiders and residents perceive the city. The city has to manage the social and economic effects of any stigma that might arise.

The stigma of this sort of association is clearly not unique to Christchurch nor to one-off tragedies. Other places that came to be identified with atrocities include Port Arthur, Tasmania, after the mass shooting in 1996, and Lockerbie, Scotland, after the 1988 plane bombing. Stigma can also arise from a history of industrial decline, pollution or political upheaval.

Read more: From trauma to tourism and back again: Port Arthur's history of 'dark tourism'

Geographers refer to a concept of “territorial stigma” but usually in relation to poorer sections within a city rather than whole cities. That said, this concept – and notions of individual stigma and its management – may have relevance for how Christchurch or any other community can recover over time. We can see examples of such recovery in Port Arthur and the state of Tasmania, in Kobe, Japan, after a devastating earthquake, and in Eindhoven in the Netherlands after economic collapse.

Christchurch also faced the impact of stigma as a devastated city following earthquakes at the start of the decade, as did Kobe after the 1995 earthquake.

In Kobe, city planners gave themselves the crucial role of being agents of change and mediators between the government and the community. They championed community-led place-making (machizukuri in Japanese). Machizukuri examples of Kobe renewal are still praised as beacons of effective disaster recovery and urban planning. What underlies the challenge and the response? 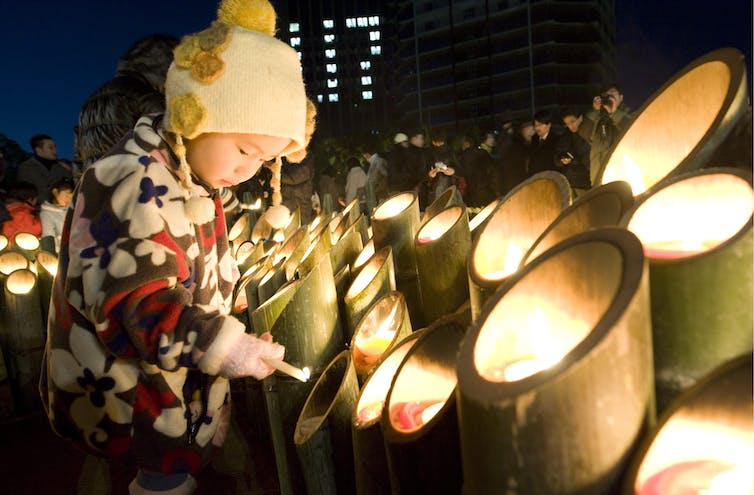 A girl lights a candle during a 2010 ceremony to remember the thousands of victims of the 1995 Kobe earthquake. Everett Kennedy Brown/EPA

Stigma and its management

Individual stigma was characterised by the sociologist Erving Goffman, who noted that the Greeks used the term to refer to “bodily signs designed to expose something unusual and bad about the moral status of the signifier”. He clarified that stigma now refers to the disgrace itself, the reason for social rejection, rather than just to the mark.

Loïc Wacquant extended the concept of stigma to locations. Territorial stigma occurs in neighbourhoods of post-industrial cities as a result of marginalisation through poverty, unemployment, insecurity and criminality.

Wacquant and others argue that policies and practices – such as government grant schemes or depictions in the media – maintain this boundary between “spoiled” areas and the rest of the city. Those with power undertake this marginalisation as a means for the rest of the city to achieve economic growth. Such stigmatisation and marginalisation can lead to unattractiveness to migrants and businesses, lower property values, and policy neglect.

Managing such stigma, at least for individuals, Rebecca Meisenbach found, ranges from accepting or avoiding it, to arguing against it, or proudly displaying the stigmatising characteristic. For cities, we can see such strategies being undertaken. But which ones are the most effective?

The Winning from Second report, based on research by the UN Global Compact – Cities Programme and RMIT University for the Committee for Geelong, identified cities or regions that have successfully shifted perceptions and associated stigma. The study’s examples were second cities with smaller populations, often existing in the shadow of larger global cities.

The report found success where a city undertook a unified approach to economic and cultural development. That would include uniting the stigmatised sectors of the community with “wise” allies, such as in the investment sector. One approach was support of new and innovative businesses, such as development of a health tech corridor in Cleveland, Ohio.

These second cities also aimed to provide an identity and attractions distinct from those offered by nearby capital cities. In essence, they celebrated their difference.

Read more: Putting culture at the core of the Christchurch rebuild

Eindhoven managed a successful transformation. It was a “one-company town”, home to the electronics giant, Philips. Philips relocated its manufacturing in the 1980s, causing job losses and the collapse of businesses.

Local government and business leaders collaborated to convince Philips to retain its research and development arm in the city. That launched the area as an innovation hub, referred to as Brainport Eindhoven.

With only 4% of the Netherlands population, the city now generates 44% of the country’s patents and 19% of its private investment. Eindhoven has shaken off negative perceptions to become known as one of the world’s most innovative cities. 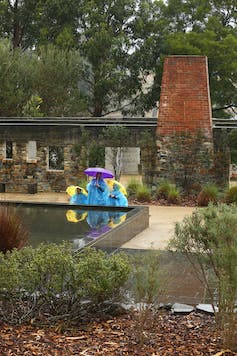 A memorial pool near the massacre site is a permanent reminder of the lives lost in 1996, but Port Arthur refuses to be defined by this one act of infamy. Robert Cianflone/AAP

A similar reversal in Tasmania was recently described by David Bartlett, the premier from 2008-2011, who spoke about the “MONA effect”. He explained the impact of the “random lightning bolt of weirdness” that is the Museum of Old and New Art in Hobart. MONA’s opening in 2011 boosted tourism numbers and spawned a range of other enterprises, breathing new life into the state economy.

Bartlett said this MONA effect shifted perceptions of Tasmania. “We have had an extraordinary cultural change in Tasmania,” he said. “There is a cultural confidence and a contagious view of our own assets.”

The Kobe, Eindhoven and Hobart examples suggest that the prosperity and well-being of Christchurch depend on the city’s leaders and the community, now united in grief, finding a path to shared solutions. Overcoming the effects of terrorism, natural disasters or economic adversity also demand pride in the history and distinctive character of the city, albeit while looking forward. In such efforts, collaboration appears to be a pivotal element, especially partnerships between the stigmatised and the “wise” among us.