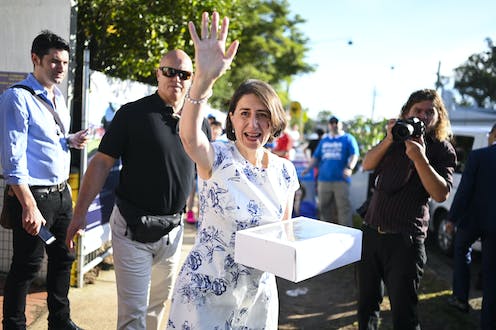 With 54% of the vote counted at the New South Wales election held today, the ABC is currently projecting 45 of the 93 lower house seats for the Coalition, 35 for Labor, three Greens, three independents and two Shooters, Fishers and Farmers. Five seats remain undecided. Coogee is the only current clear Labor gain from the Coalition.

All crossbenchers in the current parliament retained their seats. The Greens won Newtown, Balmain and Ballina. The Shooters retained Orange, which they had won at a byelection, and gained Murray from the Nationals. Independents retained Sydney, Lake Macquarie and Wagga Wagga (also won at a byelection).

Late campaign mishaps probably cost Labor in NSW. On March 18, Labor leader Michael Daley was revealed to have made comments in September 2018, before he became leader, that could be perceived as anti-Asian. On March 20, during a leaders’ debate, Daley could not recall details of funding for his party’s policies.

The final NSW Newspoll gave the Coalition a 51-49 lead, a one-point gain for the Coalition since eleven days ago. Primary votes were 41% Coalition (up one), 35% Labor (down one) and 10% Greens (steady). Reflecting his bad final week, Daley’s net approval plunged 14 points to -15, while Premier Gladys Berejiklian’s net approval dropped five points to +1. That Newspoll was taken March 19-21, and the momentum towards the Coalition appears to have carried over into the election results.

Two days before the 2015 Queensland election, Labor leader Annastacia Palaszczuk was unable to name the GST rate in an interview. Yet Labor ousted the LNP at that election on a massive swing.

I believe the difference between Queensland 2015 and NSW 2019 is that voters are more inclined to forgive politicians who make a mistake that is perceived to be out of character. Daley has only been the NSW Labor leader since November, and his anti-Asian video revealed something that voters did not like. It is probably more dangerous for a left-wing leader to be perceived as racist than a right-wing leader.

I will update this article tomorrow with more complete details of the lower house and a look at the upper house.