Cardinal George Pell was this week sentenced by a Victorian court to six years’ jail for sexually abusing two choirboys, with a non-parole period of three years and eight months.

Although Pell was found guilty of the charges against him in December, he has remained a Cardinal in the Catholic Church. The Church previously said it would await the outcome of an appeal before taking action, but it has since confirmed that an investigation of Pell’s case will be conducted by the Congregation for the Doctrine of the Faith.

An American former cardinal was recently expelled from the priesthood by the Church following a canonical trial into claims of child sexual abuse. Here’s what it could look like if Pell was subject to a similar process.

Canonical trials are governed by the rules of the Church

Most cases concerning the wrongdoing of Catholics are tried in secular courts. The decisions and punishments handed down by the courts are normally accepted by the Church as sufficient.

But the Church will conduct its own examination of cases where the church’s canon law requires punishment outside the competence of the courts of the land. That includes the excommunication of a member of the church, or the dismissal of a priest or bishop from the clerical state – often referred to as defrocking.

Tribunals to adjudicate matters that concern the Church’s own internal governance are principally governed by the rules and regulations of the Church, which are known as canon law (from the Greek etymology κανών or kanon, meaning a “rule”). These regulations are set out in the Church’s Code of Canon Law, which came into effect in 1983.

Since such trials are conducted because of the requirements of canon law, they are known as “canonical trials”.

Read more: How an appeal could uphold or overturn George Pell's conviction

Sexual abuse cases are handled by the Holy See

Catholic Church tribunals are normally held in the diocese of the parties to the case. The bishop of the diocese can judge cases for his diocese. But since bishops often have little or no in-depth knowledge of canon law, most cases in Catholic Church tribunals are handled by judges (clerics or laypersons) appointed by the bishop. The presiding judge is a priest known as the judicial vicar.

Some matters cannot be introduced at a diocesan tribunal, but are reserved for the various tribunals at the Holy See. This includes cases involving dioceses and bishops, and certain serious matters regarded as crimes in the Catholic Church. Examples of this would be matters of sacrilege (offences against the sacraments), and sexual offences by a cleric against a minor under the age of 18. 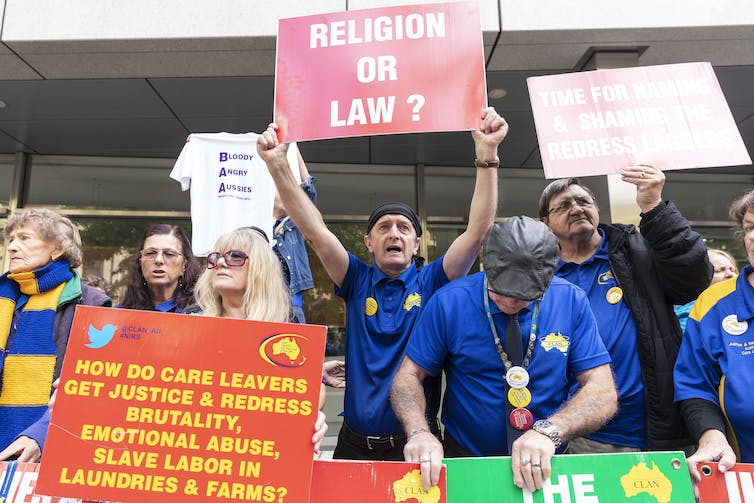 Protesters react outside County Court in Melbourne after the sentencing of George Pell was handed down. Daniel Pockett/AAP

Usually a single judge presides over contentious and penal cases. But a college of three or five judges will normally try more complicated or difficult cases – especially if the prescribed penalty is an excommunication from the Church, the dismissal of a cleric, or if the case concerns the annulment of a marriage or an ordination.

Other officers of the tribunal include the promoter of justice, who is the prosecutor in penal cases. The tribunal also has notaries who swear in witnesses, and commit their testimony to writing.

Like any legal system, parties in a case have the right to appoint an advocate who can argue for them at the tribunal. If a person cannot afford an advocate, the tribunal can assign one to them free of charge.

Read more: Triggering past trauma: how to take care of yourself if you're affected by the Pell news

The standard of proof used by the Catholic Church tribunals is “moral certainty”. Certainty results from examination in good conscience of the available evidence. This isn’t the same as “absolute certainty”, but it’s more than mere probability. It is normally stricter than guilt “beyond reasonable doubt”, which is usually held to be the absence of doubt based on reason and common sense.

As a general rule, the defendant has the presumption of innocence, which means the defendant will win by default unless a majority of the judges is convinced with moral certainty of the petitioner’s case.