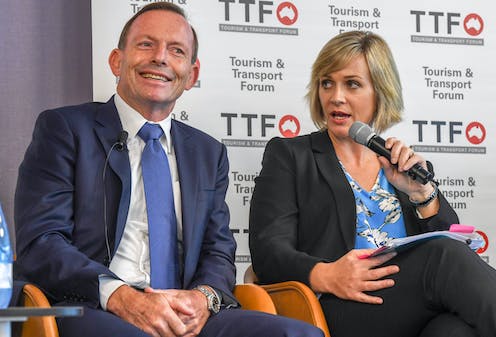 The gainers from these spectacular plays were Zali Steggall, the independent candidate who is trying to oust Abbott in Warringah, and Bill Shorten, who is handed another break in his campaign to defeat the government.

Years ago, in a much earlier round of the climate and emissions wars, Abbott referred to himself as a “weather vane.” That accurate self-assessment invited ridicule, but his latest change of direction is beyond absurd.

For months, Abbott was calling for Australia to exit Paris, like the Americans. It was part of his unremitting campaign against Turnbull, and the then PM’s drive for a national energy guarantee.

But Abbott’s new view is that leaving Paris is unnecessary.“I’m not calling for us to pull out now,” he told a Warringah candidates’ debate on Friday.

“We had an emissions obsession that needed to be broken and it’s now changed”, with a new prime minister and a new energy minister, he said.

“We can meet our Paris targets without substantial policy change and without significant additional costs on the economy.”

Abbott’s beef with the Paris agreement – for which his government set Australia’s targets – was tied to his jihad against his successor.

What’s mostly changed, though, is Abbott’s own circumstances. He faces what’s for him an existential threat – the risk of being driven out of parliamentary life. Steggall has climate change at the centre of her campaign.

But can Abbott really think his local voters are so naïve that they’ll be convinced by such an obviously expedient shift of position? They know him too well for that.

University of Canberra research has shown they are critical of him, especially over his opposition to same-sex marriage and his wrecking behaviour.

Isn’t his risk that they could simply become more cynical, concluding he’s taking them for mugs, and he could worsen rather than improve his position?

And apart from how Warringah will read his latest shift, what about his vocal right-wing supporters? You’d expect they would be shocked by this backflip.

Abbott didn’t do a full conversion, however – he remains a coal advocate, suggesting the Snowy Hydro Corporation could invest in it.

That was enough to bring in Turnbull, who slapped down his nemesis from afar. Oceans and time zones mean nothing when your anger burns hot and Twitter’s at hand.

“But it isn’t, ” Turnbull tweeted from London in response to Abbott’s claim about cheapness. “Today the cheapest form of new dispatchable or base load energy is renewables plus storage.

"We are now able to have lower emissions and lower prices but we need to plan it using engineering & economics rather than ideology and innumerate idiocy”.

In another tweet Turnbull continued, “The reason the fossil fuel lobby and their apologists rail against Snowy Hydro 2.0, and have tried to stop it, is because it delivers the massive storage which does make renewables reliable and this enable our progress to lower emissions and lower energy prices”.

Turnbull was already fired up, having in a BBC interview (recorded on Wednesday London time) once again canvassed the circumstances of his political demise in that “peculiarly Australian form of madness” of last August. Unloading on those who’d brought him down, he contended that “you could argue, that their concern was not that I would lose the election but rather that I would win it”.

If it isn’t enough for a government, weeks out from the announcement of the election, to have two former PMs refighting the climate/energy wars, the Nationals are parading their own obsessions and divisions.

A letter this week from half a dozen Queensland Nationals called for the government to underwrite a new power generation project in regional Queensland (they refrained from specifying coal but that’s what they were thinking). They also said the government should put its “big stick” legislation to discipline power companies to a parliamentary vote – despite the fact it would be amended unacceptably and so get nowhere.

This was followed on Friday by a Courier Mail report that some Nationals, discontented with Michael McCormack’s leadership, were pushing to have him replaced by Barnaby Joyce before the election.

The agitation is driven particularly by the situation in Queensland, where several Nationals’ seats are at risk – notably Capricornia, Flynn and Dawson.

Joyce did nothing to calm things on Friday when he told the Northern Daily Leader he was “not driving the process”, but if a spill were called “of course I would stand”.

McCormack is not cutting through electorally and critics are unhappy he does not stand up enough to the Liberals.

But any attempt at moving him before the election would be madness - and most Nationals do appear to accept that.

Consider how it would look, in budget week (the only time the parliamentary party is scheduled to be in town before the election) if the Nationals were to roll the Deputy Prime Minister, or make a move to do so.

Anyway, Joyce is now a highly controversial figure within and outside the party. He might win some votes in Queensland, but he might well lose some for the government elsewhere.

With a battle for the “women’s vote” so live at this election, and Labor going all out to exploit Coalition weaknesses in this area, it would be lunacy to think of bringing back someone whose exit from the leadership was partly triggered by allegations of sexual harassment.