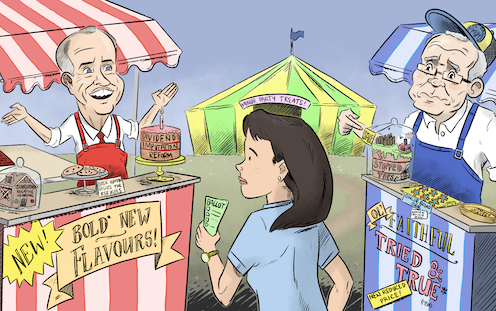 For a generation, politics has been wearying for those of good heart and outright damaging to those targeted in the culture wars unleashed in the 1990s. How this happened, and whether it will continue, are questions pressing hard upon us.

Over the past two decades, the moorings of this “left” versus “right” paradigm of political competition have morphed somewhat – in the latter case, drastically.

The “left”, traditionally organised around better pay and conditions for working people, has incorporated post-materialist political concerns around identity (most recently, for example, marriage equality rights) and the environment. The Australian Labor Party has continued to straddle the tensions to which this occasionally gives rise, first evident in the 1970s and increasingly significant in the new millennium. The proposed Adani coal mine provides the latest example of this.

The founding of the Australian Greens in 1992 was a structural expression of this development. The party provided a political home for progressives unwilling to practise a politics involving the trade-offs and compromises necessary to achieve government in its own right. The downside is that the Greens mostly acquire influence but not power.

These two main parties on the “left” mirror the existence of the two main parties – the Liberal Party and National Party – on the “right”. But, unlike the Liberals, who rely on the Nationals to form coalition governments, Labor generally returns enough members at elections to govern without needing another party’s support. The exceptions to this are the ACT and Tasmania, where proportional representation systems deliver more minor party MPs than elsewhere.

The “right” over the last two decades in Australia has imported the US Republican Party playbook. President Richard Nixon’s “Southern Strategy” exploited race in the late 1960s to realign white working-class Democratic Party supporters in the American south with the Republican Party.

From 2001 Howard used the so-called “war on terror” to heighten racial tensions for political gain more explicitly. His government broke from previously bipartisan migration policies to harness migration to national security concerns well beyond what was necessary to actually address those concerns.

Tampa and the “children overboard” scandal were prominent examples. Recent manifestations include the whipping up of unfounded fears about ethnic gang violence in Melbourne and flagrant accusations about the likely consequences of the “Medevac” bill passed by parliament against the government’s will in February 2019.

Australian politics has been hostage for a generation to the divisive, racialised politics practised by Howard and his Liberal and National Party (LNP) successors, wedging Labor, which struggled to refocus the agenda beyond it.

Right’s strategy looks to be losing its sting

However, 2019 may well be the year this long cycle of race-baiting politics from the “right” in Australia exhausts itself. The Morrison government’s oversight of inhumane practises in offshore immigration detention centres, and the “no bid” tendering of responsibility for some of these to dubious corporate entities, are becoming perceived proxies for incompetent government.

Despite recent efforts to recharge it, the fear factor inculcated by the LNP around migration seems to have dissipated. Several moderate conservatives have been elected to the crossbench who in the pre-Howard era would have stood as Liberal candidates rather than as independents. They are living proof that even many on the “right” have little stomach for playing Nixon-style politics in Australia any more, even as it flourishes anew in the US through President Donald J. Trump.

This shift occurs in the context of the LNP recently being seen to be wrong-footed on several totemic policy issues: the environment, gender equity and gay rights. With saturation support from Rupert Murdoch-owned News Corporation media outlets and several commercial radio shock jocks, climate change denial, the trivialisation of gender equity issues and refusal of marriage equality for the LGBTQI community were consistent political winners for the LNP – until the moment they were not.

Along with the diminishing dividends of the LNP’s race-baiting for political gain, this hints at the renewal of Australian voters’ better instincts. The LNP tropes of the last two decades seem exhausted.

Are we at a turning point?

The successful plebiscite vote for marriage equality in 2017 may well have been a turning point. The revolt of female Liberal MPs over their treatment at the hands of male colleagues may be another.

Increasingly vocal dissidents within the wider LNP urging action on climate change is a further hopeful sign. Prime-age cabinet ministers like Kelly O’Dwyer, who lamented last year to Liberal colleagues that they were widely seen as “homophobic, anti-women climate deniers”, are voting with their feet and departing parliament at the next election.

Read more: A 'woman problem'? No, the Liberals have a 'man problem', and they need to fix it

Together, this points to a possible sea change – a welcome one – in Australian politics after a long, acrid 20-plus years of disrespect, division and denial.

A Labor Party strengthened by rules reinforcing, rather than allowing the undermining of, the leader has arguably been central in this shift. Internecine warfare has been replaced by steady attention to policy issues rather than questions of leadership personnel.

Secure in his position, Opposition Leader Bill Shorten goes to the election confidently advancing some politically risky policies on negative gearing, dividend imputation and humane treatment of refugees. The quality of the Labor frontbench is as strong as at any time since the Hawke-Keating era.

The nascent appetite in the electorate for hope over hate, for forward momentum over susceptibility to artificially stoked fear, favours a change to government capable of decisive action on the big neglected issues, of which climate action is second to none.

The successful reframing of Australian politics from fear to hope is a mighty challenge, one undertaken against the massive dead weight of Australian media influence reinforcing our baser instincts over the past 20 years. It seems to be under way. One can only hope it succeeds.