Four small artefacts found on the island of Tongatapu, Tonga are among the earliest tattooing equipment known. Two have been found to be made from human bone.

Since their original discovery in 1963, the Tongatapu artefacts have been in storage at the Australian National University awaiting further examination. In 2016, we took the first really good look at these artefacts using the modern methods and techniques now available to archaeologists.

Through directly dating a sample from one of the combs (the blades that drove the ink into the dermis layer of skin), we determined that the four artefacts were 2,700-years-old – much older than originally thought.

Careful examination also discovered that while two of the combs were made of sea bird bone (such as albatross), the other two were made from the bones of a large land mammal – probably human.

Why human bone? No large mammals were present on Tonga apart from people at that time and early burials from the Pacific show that bones were often taken from burials. We also know that human bone was a favoured material used to make tattooing combs in more recent times. 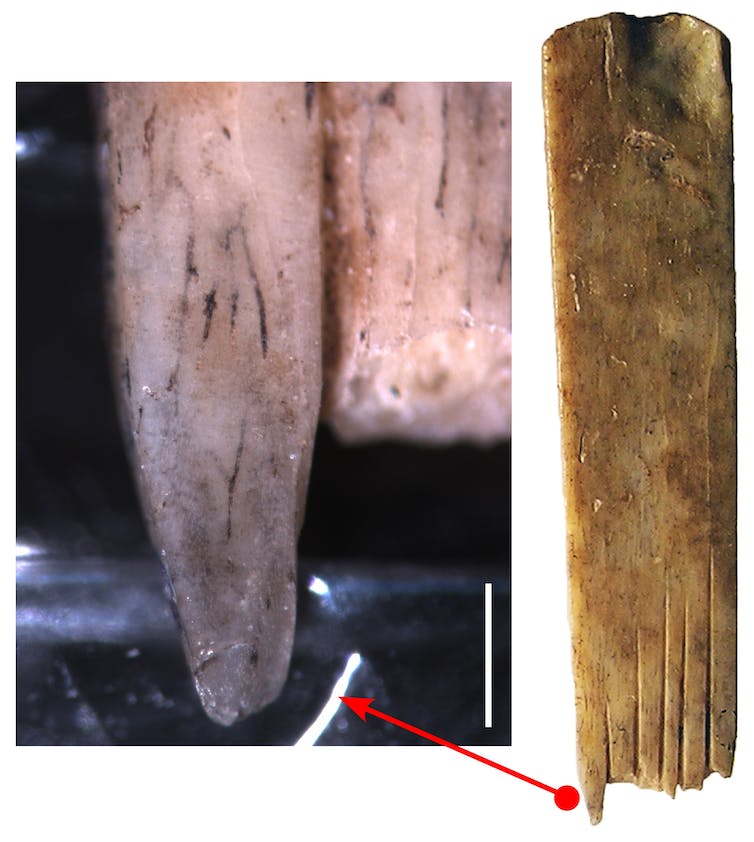 Ink staining on one of the human bone combs. Author provided

Tattoo combs made from human bone could mean that people were permanently marked by tools made from the bones of their relatives – a way of combining memory and identity in their artwork.

Originally found alongside the combs was a small pot likely containing tattooing ink. Together, these artefacts made up a tattoist’s toolkit – something exceedingly rare in the archaeological record – and the oldest set of its kind found.

There is little evidence for early tattooing because tattooed human skin rarely survives intact enough for us to be able to see an inked design.

Thus far, the earliest evidence for tattooing reaches back to 5,300 years – the oldest known case being two ancient Egyptian mummies with small motifs inked into their upper arms.

Other early examples include the famous “Ice man” of the Italian Alps and the Siberian “princess” found with extraordinarily complex designs across her body.

The discovery of implements used in tattooing is even rarer. This is because identifying tools used to ink one’s skin is exceptionally difficult – any sharp object could potentially be utilised. Also, the kind of evidence needed to positively identify a tattooing blade (such as ink) often doesn’t survive.

The oldest surviving tattooing tools found so far are sharp flakes made of obsidian (volcanic glass) used 3,500 years ago in New Guinea for piercing or puncturing the skin, and in Egypt, single metal or stone points that might be tattooing equipment dating back to 3,200 BC.

In Oceania, we don’t have mummies to help us figure out when tattooing first appeared because skin doesn’t survive our harsh tropical conditions. So, instead we must look for less direct clues – such as tools.

While the Tongatapu bone combs are younger than the metal and stone points previously found, they are part of a far more complex technology – one which is still used in present day traditional tattooing.

In the Pacific, tattooing has a long history. The unique and powerful designs made an impact on early European explorers to the region, and the return of tattooed sailors, beachcombers, and Indigenous peoples to Europe created lasting interest in the practice.

Ultimately, it was this contact between European and Pacific cultures that led to the vibrant modern tattooing traditions and the spread of Polynesian inspired tattoos all over the world today. (Ironically, in the 19th century missionaries suppressed tattooing in parts of the Pacific and in Tonga itself, people had to travel to Samoa to be tattooed.)

Hear about the importance of tattooing in the Pacific from those using tools near identical to the Tongatapu artefacts.

Despite the importance of tattooing to past and current Pacific peoples, we don’t actually know if it was something that arrived with the first human colonists to the islands around 3,500 years ago – or if it was invented at some point afterwards.

With this discovery, however, we now know that the complex inline tattooing combs were already present in Tonga almost 3,000 years ago and that they may very well have been invented there.