After months of debate, the Australian Securities Exchange last week dumped a proposal to include reference to a “social licence to operate” in its updated Corporate Governance Guidelines.

It was wrong to do so.

The new guidelines, released on Wednesday, replace “social licence to operate” with terms such as “reputation” and “standing in the community”.

The chair of ASX Corporate Governance Council chair Elizabeth Johnstone says they are “more likely to be better understood”.

But in practice they don’t mean the same thing. 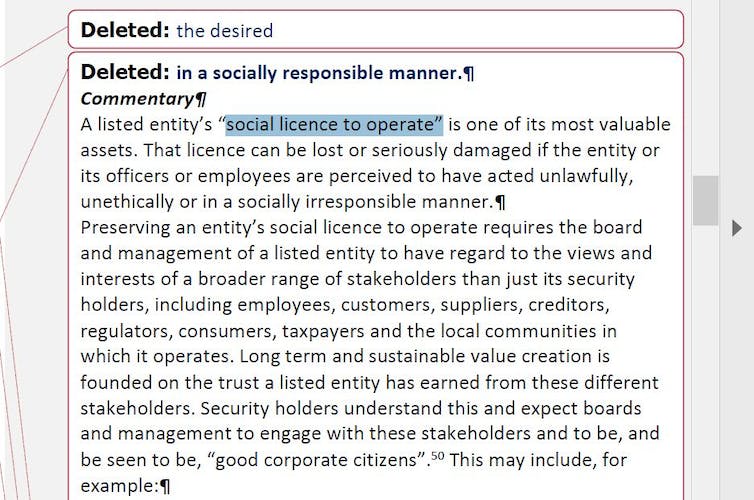 According to the Australian Financial Review the Council came to the view that the phrase was “contentious” and that it would “create problems for companies in the gaming, alcohol, tobacco, fast food and mining sectors” – the very sectors where corporate responsibility is at constant risk, and governance is most needed.

David Murray, chair of troubled investment firm AMP, had labelled the phrase “politically correct nonsense” – which raises the question as to whether the phrase is indeed left-wing nonsense and why the Council felt the need to dumb it down.

The AMP chair’s comment suggests the financial sector has still a long way to go in understanding that businesses are not only responsible to their owners but also to a wide array of stakeholders who have legitimate claims; among them governments, communities, customers, and citizens. As a consequence, as the AMP ought to well know, businesses operate in an environment of contested values.

“Politically correct” or not, the phrase is an accurate metaphor for the reality that companies that disregard the values of the societies in which they operate run the risk of boycotts and legal and legislative action that will put them out of business.

It raises the question why the Council felt the need to shy away from such an accurate depiction of what is necessarily a key governance objective: maintenance of the social licence to operate.

There are probably two reasons:

As it happens, the mining industry has long been aware of the need to maintain such a licence and made significant progress in embracing social responsibility in the fields of human rights and indigenous inclusion strategy.

It is hard to see how the concept of a social licence would create problems for it.

Read more: Not getting a social licence to operate can be a costly mistake, as coal seam gas firms have found

Other industries have long avoided such a debate and have instead engaged in reputation management through campaigns around responsible gambling, responsible drinking and healthy eating – all of which are paradoxical attempts to soften the edges of a problematic core of their operations rather than to align them with what society wants.

Continuing to do so, by pretending there is no such thing as a social licence, is not in their long term interests.

By surrendering, the Australian Securities Exchange has served neither them nor the cause of corporate governance well.