Syphilis is a sexually transmissible infectious disease that has plagued humankind for centuries. Today, syphilis is diagnosed rapidly by a simple blood test, and easily treated with an inexpensive antibiotic. However, the disease may masquerade as other medical conditions, confusing even health care professionals. A delay in diagnosis and treatment may have serious medical consequences.

There’s ongoing debate about the origin of syphilis, but the disease is well described in the medical literature from the Middle Ages. The name “syphilis” was coined in 1530 by an Italian physician. Dr. Girolamo Fracastoro wrote a poem describing features of the illness in a fictional shepherd named Syphilus, who had blasphemed against the Sun-God and was punished with a severe case of the disease.

Since this time, syphilis has claimed many lives and influenced civilisation in diverse ways.

Syphilis has afflicted heads of state, whose nations have suffered from the consequences of their diminished mental health. King Henry VIII of England and Tsar Ivan IV Vasilievici of Russia (“Ivan the Terrible”) are examples. Careers of internationally influential artists – such as Ludwig van Beethoven, Oscar Wilde and Scott Joplin – ended prematurely due to syphilis.

Read more: Three charts on the state of STIs and blood-borne viruses in Australia

Syphilis is caused by a spiral shaped bacterium called Treponema pallidum. Although the bacteria multiply slowly, they are easily passed between sexual partners via the skin or mucous membranes.

A small ulcer is the typical “first stage” of syphilis. The ulcer does not appear until several weeks after the sexual encounter, and it is painless, short-lived and heals without a trace. So it may go unnoticed, especially if it occurs in an inconspicuous place, inside vaginal or rectal passages, or in the mouth.

The second stage of syphilis is characterised by unusual skin and mucous membrane rashes that improve without treatment over weeks to months. The disease then enters a period called the latent stage that lasts for years, during which a person has no symptoms, but continues to be infected.

Finally, in the tertiary stage, syphilis becomes extremely destructive. Large inflammatory growths that occur anywhere in the body may seriously damage tissues. There may be aneurysms, heart disease, dementia and paralysis.

Syphilis can also be passed from a pregnant woman to her unborn child, resulting in a serious illness and sometimes loss of the baby.

Throughout the course of syphilis, the nervous system and senses may become affected, causing unusual health problems. This includes inflammation inside the eye, called uveitis. Syphilitic uveitis causes vision loss in about two-thirds of people who develop it, and may lead on to other eye conditions, such as cataract, glaucoma, retinal scarring and retinal detachment. 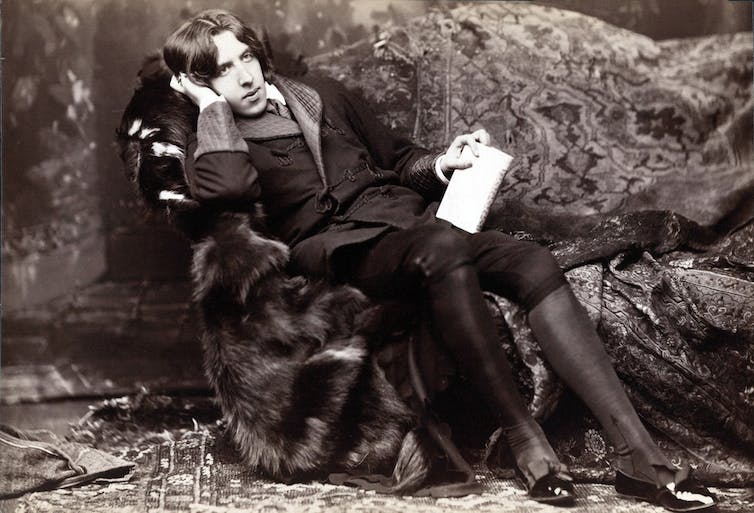 Oscar Wilde is one of many well-known people throughout history who suffered from syphilis. from www.shutterstock.com

Introduction of penicillin into medical practice in the 1940s provided an opportunity to eradicate syphilis, as Treponema is highly sensitive to this antibiotic. In countries where testing and antibiotics were readily available, rates of syphilis dropped to extremely low levels during the 20th century.

In Australia in 2010, there were just five reported new infections per 100,000 people. Hope was high that the same might be achieved in low income, developing nations.

Unexpectedly, however, rates of syphilis are climbing in high income countries across the globe. Latest figures from the Kirby Institute indicate an increase by over 250% between 2010 and 2017, affecting both Australian men and women.

Many factors are responsible. Aware of the highly effective drugs for HIV infection, people are less concerned about safe sex. Other factors that promote spread of the Treponema bacteria are high levels of travel and new drugs for sexual dysfunction. There is also a relationship between HIV infection and syphilis: having one infection increases the risk of catching the other.

This creates a challenging situation for health care professionals, who are suddenly encountering patients with a disease they did not focus on during their training. Add to this that syphilis may masquerade as a wide range of other medical conditions as it moves past the first stage. It is actually referred to in clinical textbooks as the Great Imitator or the Great Mimicker.

As ophthalmologists we have noticed an increase in cases of syphilitic uveitis. A delay in starting penicillin can result in permanent vision loss. In one very large study conducted in Brazil, it took about three months to recognise syphilis as the cause of uveitis, and half of people in the study did not fully recover their vision despite taking antibiotics.

Ophthalmologists who specialise in uveitis identify the lack of medical suspicion for the diagnosis of syphilis as an important reason for a delay to starting treatment.

There is no vaccine for syphilis, and a person may catch it more than once. But there are ways to avoid the health problems caused by syphilis. Practising safe sex protects against – but does not completely prevent – the disease.

Testing is key. It involves checking the blood for antibodies against Treponema bacteria. The test is inexpensive and you get results within a day.

Anyone who is sexually active can ask for a test, but certain situations should trigger a test: pregnancy; HIV infection or sexually transmissible infections; and a partner with syphilis. Doctors may also suggest a test for rashes or ulcers, and for some inflammatory problems, such as uveitis. Everyone from the general public to our health-care professionals need to be more aware of syphilis.