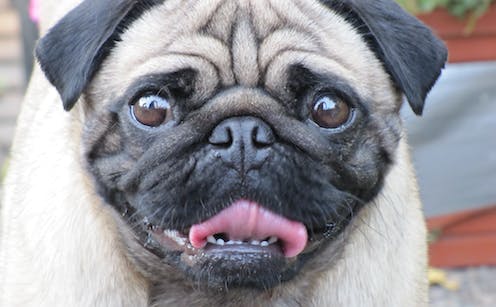 Veterinarians have a professional and moral obligation to reduce or prevent any negative health impacts of disorders in animals. But what if animals are bred with known disorders? And what if those disorders are a big part of what makes them cute?

In a paper, published earlier this year in Animals, we argue that veterinarians must do more to discourage the breeding of animals with conditions known to seriously compromise their welfare.

This is the case with extreme brachycephalic or short-skulled dogs, including French bulldogs, pugs, British bulldogs, Boston terriers, and Cavalier King Charles spaniels.

The trend towards shorter skulls seems to have taken hold since the 1870s and the development of breed standards that inadvertently encouraged extreme “conformation” (shape, size and anatomical proportions).

In companion animal practice, the veterinary profession is kept busy ministering to these dogs and bringing them into the world, with more than 80% of Boston terriers, British bulldogs and French bulldogs being born by Caesarean section.

Extreme brachycephaly is associated with a range of disorders, most notably Brachycephalic Obstructive Airway Syndrome (BOAS). BOAS occurs in shorter-skulled dogs because the nose, tongue, soft palate and teeth are crammed into a relatively small space, reducing the size of the airway.

Clinical signs of BOAS include increased respiratory noise, effort and difficulty in breathing, an intolerance to exercise, gagging, blue gums (in the mouth), overheating and fainting.

The hotter the temperature, the harder these dogs have to work to cool down by panting. As a result, the tissues of the upper airway swell, further reducing airflow and eventually causing airway obstruction, which causes them to get hotter . It’s a life-threatening vicious cycle.

This reduced capacity to cope with heat explains why Qantas no longer permits the transport of affected breeds on flights longer than five hours, or those with more than two sectors per journey.

Affected dogs also change the way they sleep to avoid airway obstruction, sometimes by adopting a sitting position. They also raise their chins or sleep with a toy between their teeth to keep their airways open. Indeed, 10% can sleep only with an open mouth.

Brachycephalic dogs also have an increased anaesthetic risk – and yet increasingly need surgery to treat these problems.

This is not new information. For example, in 2008, the documentary Pedigree Dogs Exposed revealed the impact of extreme brachycephaly on dogs.

Despite accumulating evidence about the health and welfare impacts of brachycephaly, affected breeds are becoming more popular.

In the last decade, registrations of French bulldogs have increased by around 3,000%. This prompted kennel clubs to warn prospective owners about the real possibility of bad breeders trying to cash in on the trend.

Extreme brachycephalic dogs aren’t the only ones bearing the costs of inherited health and welfare problems.

Figures from overseas and Australian pet insurance providers confirm that the financial costs of owning extreme brachycephalic dogs are high. This is due to the many conditions they suffer from including, but not limited to, BOAS.

Analysis of more than 1.27 million Australian pet insurance claims over a nine-year period (2007-2015) confirms this.

There is also the emotional cost of owning dogs that may require extensive treatment, and live, on average, shorter lives than their longer-nosed canine counterparts.

What more can vets do?

The brachycephalic dog patient may place veterinarians in ethically challenging situations when they are approached to help in treatment and breeding of affected animals.

In discussing breed-associated disorders, veterinarians may appear to be critical of the very features that clients find most endearing about their companion animals and some have preferred to speak up only anonymously. Or veterinarians may have a conflict of interest if they draw an income from treating the typical disorders.

But unless veterinarians and breed organisations speak up, the demand for extreme brachycephalic breeds will continue. The enormity of the welfare problem is increasing with the increased demand for affected dogs.

The Australian Veterinary Association (AVA) and the RSPCA Australia joined forces back in 2016 to promote awareness of these health and welfare problems in their Love is Blind campaign.

Every veterinarian must provide every individual patient with the best possible care they can. But given what we know, we’re also morally obliged to discourage breeding of dogs with extreme brachycephaly so that we can turn off the tap on this suffering.

It’s also something potential dog-owners should be more aware of. They might think they look cute, but those extreme brachycephalic dogs could be costly, both financially and emotionally.