This is the second of two articles looking at the increasing reliance of Australian cities on desalination plants to supply drinking water, with less emphasis on the alternatives of water recycling and demand management. So what is the best way forward to achieve urban water security?

An important lesson from the Millennium Drought in Australia was the power of individuals to curb their own water use. This was achieved through public education campaigns and water restrictions. It was a popular topic in the media and in daily conversations before the focus turned to desalination for water security.

Water authorities were also expanding the use of treated wastewater – often a polite term for sewage – for “non-potable” uses. These included flushing toilets, watering gardens, and washing cars and laundry.

Today, the emphasis on recycling wastewater in some locations is declining. The arguments for increased water recycling appear to be falling away now that desalinated water is available.

Read more: Cities turn to desalination for water security, but at what cost?

This trend ignores the fact that the potential supply of recycled water increases as populations grow.

Today most Australian wastewater is treated then disposed into local streams, rivers, estuaries and the ocean. In Sydney, for example, the city’s big three outfalls dump nearly 1 billion litres (1,000 megalitres, ML) a day into the ocean.

Where has recycling succeeded?

Our farmers often struggle to secure water for irrigation. Chronic water shortages across the Murray-Darling river system vividly demonstrate this.

Read more: Damning royal commission report leaves no doubt that we all lose if the Murray-Darling Basin Plan fails

Read more: It takes a lot of water to feed us, but recycled water could help

Perth has gone further by embracing water recycling for urban use with plans to treat it to a drinking water standard. Part of the extensive treatment process involves reverse osmosis, which is also used in desalination. The treated water is then pumped into groundwater aquifersand stored.

This “groundwater replenishment” adds to the groundwater that contributes about half of the city’s water supply. The Water Corporation of Perth has a long-term aim to recycle 30% of its wastewater.

Read more: More of us are drinking recycled sewage water than most people realise

Past campaigns to get people to reduce water use achieved significant results.

In Sydney, water use fell steeply under water restrictions (2003-2009). Since the restrictions have ended, consumption has increased under the softer “water wise rules”. Regional centres including (Tamworth) outside of Sydney are under significant water restrictions currently with limited relief in sight. 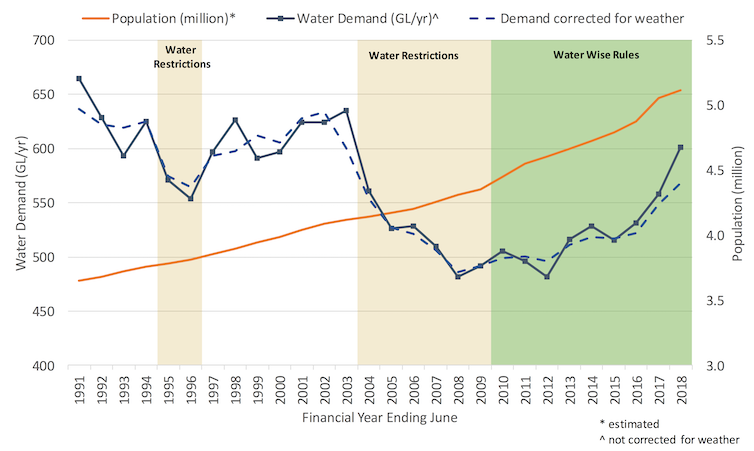 Despite a 25% increase in Sydney’s population, total demand for drinking water remains lower than before mandatory restrictions were introduced in late 2003. © Sydney Water, used with permission

The Victorian government appears to be the Australian leader in encouraging urban water conservation. Across Melbourne water use per person averaged 161 litres a day over 2016-18. Victoria’s “Target 155” program, first launched in late 2008 and revived in 2016, aims for average use of 155 litres a day.

In a comparison of mainland capitals Melbourne used the least water per residential property, 25% less than the average. Southeast Queensland residents had the second-lowest use, followed by Adelaide. Sydney, Perth and Darwin had the highest use.

Although Melbourne water prices are among the highest of the major cities, lower annual water use meant the city’s households had the lowest water bills in 2016-17, analysis by the Australian Bureau of Meteorology found. 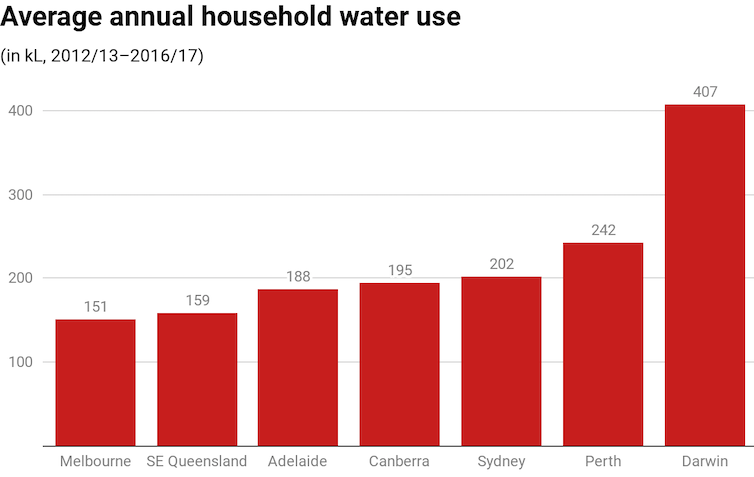 Calculated from Bureau of Meteorology data, Author provided What impact do water prices have? Clearly, water pricing can be an effective tool to get people to reduce demand. This could partly explain why water use is lower in some cities. Water bills have several components. Domestic customers pay a service fee to be connected. They then pay for the volume of water they use, plus wastewater charges on top of that. Depending on where you live, you might be charged a flat rate, or a rate that increases as you use more water. The chart below shows the pricing range in our major cities. Flat charges for water per kilolitre (where a kL equals 1,000 litres) apply in Sydney ($2.08/kL)), Darwin ($1.95/kL) and Hobart ($1.06/kL. However, most water authorities charge low water users a cheaper rate, and increased prices apply for higher consumption. The most expensive water in Australia is for Canberra residents – $4.88 for each kL customers use over 50kL per quarter. The cheapest water is Hobart ($1.06/kL). Higher fees for higher residential consumption are charged in Canberra, Perth, Southeast Queensland, across South Australia and in Melbourne. In effect, most major water providers penalise high-water-using customers. This creates an incentive to use less. For example, Yarra Valley Water customers in Melbourne using less than 440 litres a day pay $2.64/kL. From 441-880L/day they are charged $3.11/kL. For more than 881L/day they pay $4.62/kL – 75% more than the lowest rate. Is recycled water getting priced out of business? Recycling water may not be viable for Sydney Water. It can cost over $5 per 1kL to produce, but the state pricing regulator, IPART, sets the cost of recycled water to Sydney customers at just under $2 per kL. That’s probably well below the cost of production. Recycled water, where available, is a little bit more expensive ($2.12/kL) in South Australia. Subsidies are probably essential for future large recycling schemes. This was the case for a 2017 plan to expand the Virginia Irrigation Scheme. South Australia sought 30% of the capital funding from the Commonwealth. Where to from here? Much of southern Australia is facing increasing water stress and capital city water supplies are falling. Expensive desalination plants are gearing up to supply more water. Will they insulate urban residents from the disruption many others are feeling in drought-affected inland and regional locations? Should we be increasing the capacity of our desalination plants? We recommend that urban Australia should make further use of recycled water. This will also reduce the environmental impact of disposing wastewater in our rivers, estuaries and ocean. All new developments should have recycled water made available, saving our precious potable water for human consumption. Water conservation should be given the highest priority. Pricing of water that encourages recycling and water conservation should be a national priority. Read more: This is what Australia's growing cities need to do to avoid running dry You can read the first article, on cities’ increasing reliance on desalination, here.