As the planet warms, subtropical regions of the Southern Hemisphere, including parts of southern Australia and southern Africa, are drying. These trends include major drought events such as Cape Town’s “Day Zero” in 2018.

Climate projections suggest this subtropical drying will continue throughout the 21st century. Further drying in these regions will place great stress on ecosystems, agriculture and urban water supplies.

As global temperatures increase, some regions get wetter while others get drier. Climate models indicate that many parts of the tropics, where it is already very wet, will become wetter. The subtropics, which sit between the wet tropics and the wet mid-latitudes, are expected to get drier. 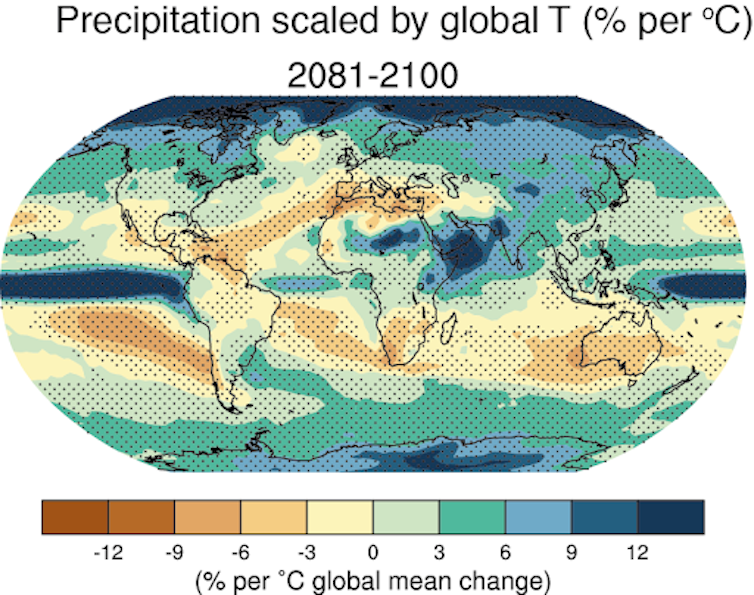 Spatial plot of global rainfall projections for 2100 from IPCC AR5, showing percent change in annual rainfall for each °C of global warming, for the last two decades of the 21st century relative to 1986-2005. Subtropical regions, like the Mediterranean and southern Australia are projected to dry. Modified from IPCC AR5 Ch. 12 Fig 12.10

Over southern Australia, rainfall is expected to decline, particularly in the cool season (which is currently the rainy time of year). This has already happened in Perth and the surrounding southwest of Western Australia. 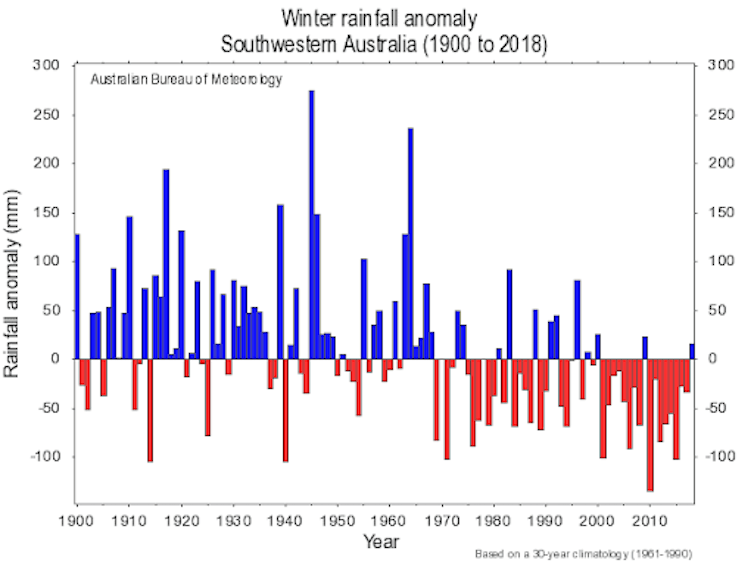 The drying trend in South-west Western Australia over the last century is significant. BoM

What will happen when warming slows or stops?

Climate models are typically used to explore future climate under transient or rising temperatures, at least until the end of the 21st century. International efforts to reduce greenhouse gas emissions are aimed at slowing and eventually stopping temperature rises so that the climate is stabilised. For example, the Paris Agreement aims to stabilise global warming within 1.5℃ or 2℃ above pre-industrial levels.

But if temperatures stop rising, how will rainfall patterns respond? To investigate, we used pre-existing climate model runs created by the international scientific community to project different conditions extending from the present to the year 2300.

The chart below shows two different scenarios: one in which greenhouse gases and temperatures level off around 2100 (this referred to as Extended Representative Concentration Pathway 4.5), and the one next to it (Extended Representative Concentration Pathway 8.5) in which greenhouse gases don’t level off until around 2250, creating a much warmer climate. 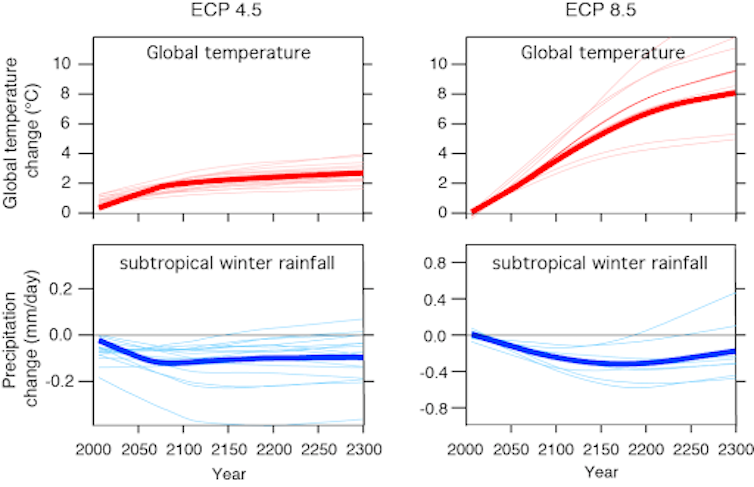 We found that rainfall in the Southern Hemisphere subtropics decreases while temperatures are rising rapidly, with most of the rainfall reduction occurring in the winter months. When temperatures begin to stabilise, subtropical rainfall starts to recover.

The subtropics are relatively dry right now because they are the region where dry air descends from the upper atmosphere to the surface, suppressing rainfall. Studies have shown that the subtropics may be expanding or shifting southward in the Southern Hemisphere as the global climate warms.

The pattern of temperature warming drives the shifts in rainfall: when the tropics are warming faster, the subtropics become drier as more moisture is exported to the tropics.

Read more: The world's tropical zone is expanding, and Australia should be worried

A wetter or drier future?

Our results suggest that stabilising global temperatures may lead to a reversal in the drying trend in the subtropics.

The path to stabilising global temperatures will be a long journey from the current trajectory of rising emissions, but this research is potentially good news for the future generations who will live in subtropical regions.

The authors would like to acknowledge Nathan P. Gillett, Katarzyna B. Tokarska, Katja Lorbacher, John Hellstrom, Russell N. Drysdale and Malte Meinshausen, who contributed to this study.