The police-informer relationship has come under scrutiny in the case of Lawyer X – a barrister who acted as counsel for a number of prominent criminal defendants. Victoria police initially reported Lawyer X had been registered as an informant between 2005 and 2009. This week, it was revealed Lawyer X was first registered as early as 1995.

Victorian Premier Daniel Andrews announced a Royal Commission in December, 2018 to determine if any criminal convictions have been affected by the scandal. The Commission is also expected to assess whether changes need to be made to how Victoria Police manages informants in the future.

The High Court criticised Lawyer X’s actions as “fundamental and appalling breaches” of her obligations to her clients and to the court. And Victoria police were admonished for their “reprehensible conduct in knowingly encouraging” the barrister to inform against her clients. 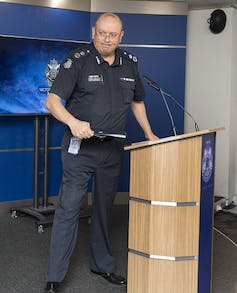 Police Chief Graham Ashton has defended the use of Lawyer X noting the gangland wars in Victoria were a dangerous time. ELLEN SMITH/AAP

So, what are the obligations of a lawyer to their client, and what rules govern a police-informer relationship?

But the organisation-informer relationship can be ethically fraught. Informers could fabricate or exaggerate facts in exchange for benefits, such as monetary payments, and reductions in criminal charges and sentences. Unreliable or false information can in turn result in unjustified convictions.

The relationship between the informer and handler of information is regulated by internal policies and protocols. There is little by way of legislation to circumscribe how law enforcement agencies select and use informers. This lack of regulation, and the covert nature of the relationships, means they largely evade external scrutiny.

In addition, rigid secrecy provisions can dissuade whistleblowers from reporting potentially unethical conduct relating to informers. Without such scrutiny, we cannot know how many Australian lawyers or barristers may be registered as human sources.

On Thursday, the ABC reported up to six additional lawyers may be registered as informants with Victoria Police.

It is not known if other law enforcement agencies have lawyers “on their books”. The ABC’s Fran Kelly asked NSW barrister, Arthur Moses SC, President of the Law Council of Australia, if he “was aware of whether NSW police or indeed the police of any other jurisdiction” used criminal defence lawyers as informants.

Moses replied he wasn’t at liberty to disclose any matters he “may have come into possession of through some other means.” This raises the possibility additional lawyers are registered as informants.

A lawyer’s duty to their client

Disclosing client communications to law enforcement may conflict with a lawyer’s obligations to their client. These include duties relating to confidentiality, promoting their client’s best interests, and avoiding and disclosing any conflicts of interest. It may consequently compromise a client’s right to a fair trial.

Rule 114 of the Legal Profession Uniform Conduct (Barristers) Rules 2015 (Vic) provides that a barrister must not disclose or use confidential information obtained in the course of practice concerning any person to whom the barrister owes some obligation to keep the information confidential.

This is consistent with the observations of Dr Matthew Collins QC, President of the Victorian Bar, that:

All Australians are entitled to know that, when they seek legal advice, the information they provide to their lawyer will be treated in the strictest confidence.

Rule 35 stipulates a barrister must “fearlessly” promote and protect their client’s best interests to the best of the barrister’s skill and diligence. They must do this without regard to their own interest.

A barrister must also refuse to accept or retain a brief if:

But, there are exceptions

Victoria Police Commissioner Graham Ashton has defended the use of Lawyer X as an informant. He argued Victoria’s gangland wars – in which Lawyer X was said to have been used as a “weapon” – were “a desperate and dangerous time” where “a genuine sense of urgency was enveloping the criminal justice system, including police”.

On this issue, rule 87 states:

A barrister whose client threatens the safety of any person may … if the barrister believes on reasonable grounds that there is a risk to any person’s safety, advise the police or other appropriate authorities.

In other words, a barrister may report confidential client communications to police where their client has threatened the safety of another person, for example, the client intends to seriously injure or kill someone. From what has been reported about the Lawyer X case, it is not clear whether her covert communications were limited to discrete instances where her clients threatened imminent harm.

Aside from the disclosure of confidential client information, the registration of criminal lawyers as informants in any circumstances may undermine the nature of the criminal trial. Where lawyers or barristers are registered as a human source, this may conflict with their duties to their client and their role as an officer of the court.

Read more: The Lawyer X scandal is a massive blow to the criminal justice system: here's why

Revelations additional lawyers may be registered as police informants have the potential to undermine public confidence in the integrity of the criminal justice system. To maintain or restore this confidence, there is a need to review how legislation regulates lawyers’ disclosures of confidential client information to law enforcement.

Aside from legal profession rules, no legislation expressly prohibits lawyers from acting as human sources. The Royal Commission presents an opportunity to consider if new laws are needed to clarify the circumstances (if any) in which lawyers may act as a human source.