Lord Howe Island is a beautiful and incredibly isolated world heritage site some 600km off the coast of New South Wales, lauded for its unique volcanic landforms and endemic species.

In a study published this month in Geological Magazine, we traced the volcanic ancestry of Lord Howe Island much further back in time than previously possible.

Geologists have known for some time the island is an extinct volcano that last erupted about seven million years ago.

Only more recently has it emerged that the island is part of a family of volcanoes, hidden from our view by the deep blue waters of the Tasman and Coral seas.

Our own story begins in 2012 when we set off from Cairns aboard Australia’s national research vessel, the RV Southern Surveyor (on one of its final voyages before it was retired and replaced by the new RV Investigator). 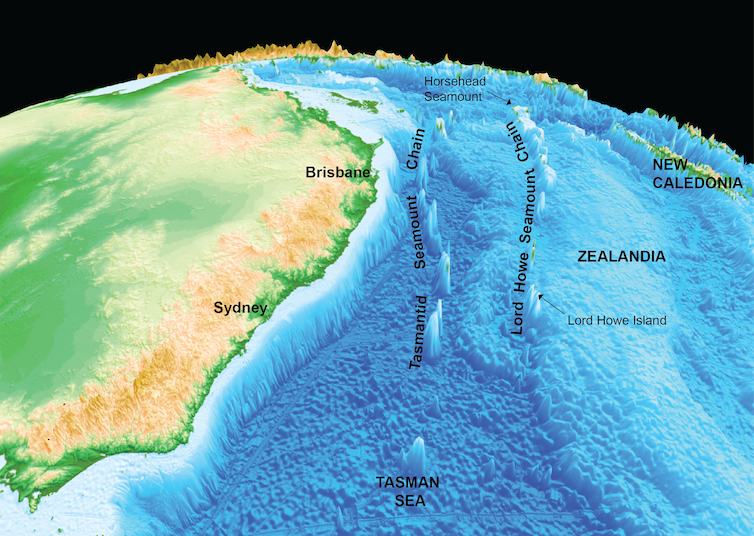 As part of this voyage, we collected the first rock samples of lava from a volcanic seamount, 1,000km northeast of Brisbane and 1,500km north of Lord Howe Island. Because of its shape we nicknamed it Horsehead Seamount. 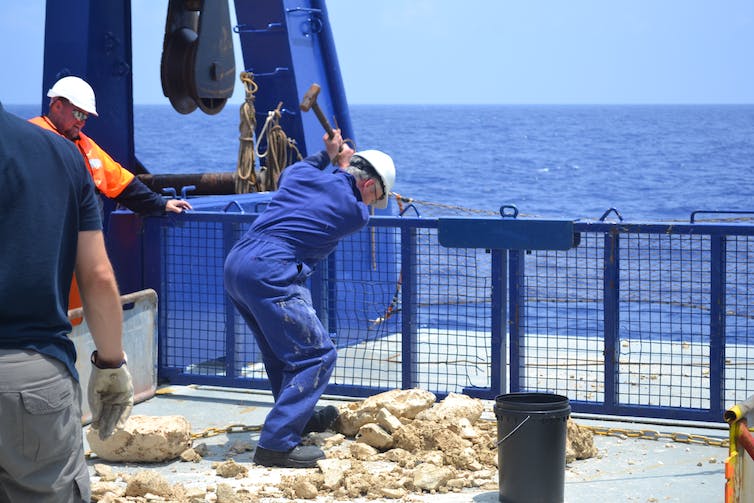 Breaking up rocks on the back deck of the RV Southern Surveyor. Maria Seton, Author provided

How could the Horsehead and Lord Howe volcanoes, so far apart and of such different ages, be related to one another? 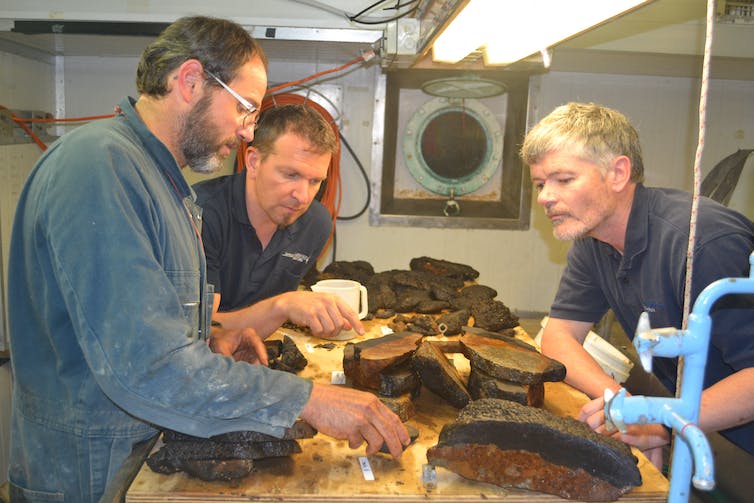 The answer lies in the combination of two fundamental processes that shape our planet: plate tectonics and convective movement of Earth’s mantle.

Earth’s tectonic plates are moving slowly across the planet’s surface at speeds of 1cm to 10cm per year. Meanwhile, hot (more than 1,400℃), finger-like plumes of molten material remain anchored deep in Earth’s mantle. These hotspots remain roughly fixed at the same latitudes and longitudes.

When these rising plumes reach the surface they produce distinctive lavas that erupt as hotspot volcanoes. As tectonic plates move over rising plumes, chains of volcanoes are formed that track the motion of the plates over the plume.

This process formed the undersea Hawaiian-Emperor chain of volcanoes in the central Pacific that is so visible on maps (see below), and which erupted spectacularly last year.

Australia on the move

This global plate tectonic and mantle activity helps us understand the relationship between Horsehead Seamount and Lord Howe Island.

About 28 million years ago the entire Australian tectonic plate and Horsehead Seamount actually lay about 1,600km further south - right on top of the fixed hotspot plume that produced the volcanic seamount. As the Australian plate moved northwards, the volcano moved off the plume and stopped erupting.

A few million years later, the process of building a volcano started all over again on a fresh part of the Australian plate. Over tens of millions of years the hotspot burned a series of volcanoes onto the Australian plate, forming a north-south trail. Lord Howe Island is one of the youngest volcanoes in this so-called Lord Howe Seamount Chain.

We estimate that the total volume of lava erupted along the 1,500km-long Lord Howe Seamount Chain is 320,000km3, enough to cover all of Victoria with a layer more than 1km thick.

The Lord Howe Seamount Chain is not the only trail of hotspot volcanoes to have left its mark on the Australian Plate this way. Another trail of seamounts runs through the Tasman Sea to the west, and previous work to determine their ages shows they also record the northward motion of Australia, over a different hotspot.

Watch an animation showing how trails of volcanoes form in the Tasman Sea as Australia moves northwards.

Another trail of volcanism runs through Australia itself, from Cape Hillsborough on the central Queensland coast to Cosgrove in Victoria, and is the longest continental hotspot chain in the world, but it is more difficult to spot.

The magma has to try much harder to break through the thick Australian crust, and once it does the volcanoes are quickly eroded away. By contrast, seafloor volcanoes provide a relatively pristine record of events that happened tens or sometimes hundreds of millions of years ago.

Other islands to discover and ‘undiscover’

The hotspots that created the seamount trails in the Tasman Sea are likely still present. By reconstructing plate motions, we can make a rough estimate of where the next volcanoes could form, and also where they won’t.

On the final leg of our voyage back to Brisbane, we passed by another supposed island that appeared on some maps but whose geological origins had remained elusive.

Read more: How we wiped out the invasive African big-headed ant from Lord Howe Island

The mystery took another turn when we found that the island did not exist – we had “undiscovered” it – a story that captured public attention.

Reassuringly for those who have booked their holiday, Lord Howe Island still exists. Now we can be sure not only that it is still there, but also how it came to be in the first place. 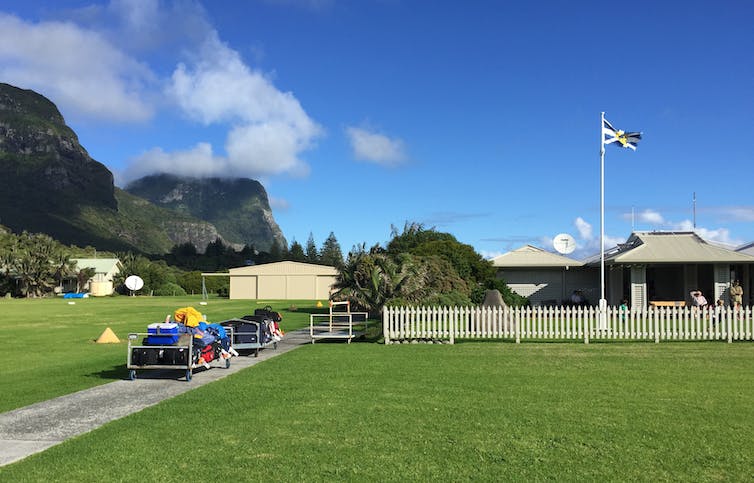