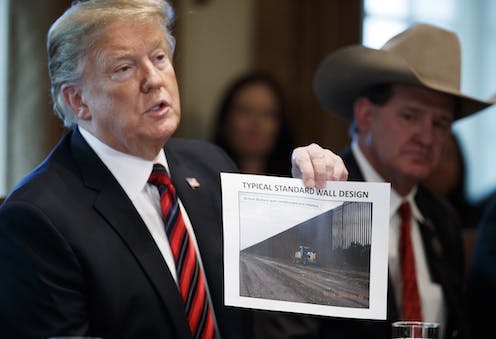 The nation whose anthem lauds “the land of the free and the home of the brave” and whose constitution was drafted “in order to form a more perfect union … and secure the blessings of liberty” continues to flirt with the prospect of authoritarian rule.

In the aftermath of his decision to temporarily reopen the federal government, President Trump is once again threatening to declare a state of emergency to allow him to spend public money on the construction of a wall on the United States-Mexico border without congressional approval.

The weakened position Trump finds himself in now makes such drastic action unlikely. But one of the lessons to be taken from Trump’s presidency is to expect the unexpected.

Read more: Separation of powers: An invitation to struggle

Should he do so, it would not, of course, be the first time an American president has asserted this prerogative.

Generally, there can be compelling reasons for declaring a state of emergency, but Trump would have been perhaps the first to invoke this prerogative in order to fulfil a (subtly altered) campaign promise.

While there is a legitimate debate about whether or not there actually is an emergency at the border, the crisis that would be created should Trump declare an emergency in order to secure public funding for his “big, beautiful wall” would not primarily be about policy. It would concern more fundamental matters, such as the efficacy of America’s much-vaunted constitutional system of checks and balances.

The US constitution established three branches of government: legislative, executive, and judicial. It apportions power to each branch so none can dominate the others. But the American constitution pays relatively little attention to the presidency. There are only four short sections concerning the office, only one of which contains much detail about presidential powers.

This means the powers of the president remain under-articulated. The constitution is also silent on how states of emergency should be managed. Taken together, this means it’s not entirely clear that legislative and judicial institutions can rein in a president who declares a state of emergency on spurious grounds.

In effect, by declaring a state of emergency a president assumes additional powers by essentially creating exceptions to rules and laws that normally constrain them. The courts can and likely would review the legality of any such action. But rulings against presidents are the exception.

Battle for the GOP

More prosaically, if the “Trump shutdown” strained relations within the Republican Party imagine what a “Trump state of national emergency” might do. The party’s establishment has proved willing to accept various affronts to presidential conventions of conduct.

This includes Trump’s propensity to play fast and loose with the truth, his lack of appetite for work and limited grasp of policy detail as well as his inability to serve as a president for all Americans.

But it is clear the partial shut-down has significantly ratcheted up tensions within the party and added to speculation Trump will face a primary challenge some time before the 2020 presidential election.

In that context, it is conceivable that a presidential declaration of a state of emergency for wall funding might at last be the moment when Republicans – or at least enough of them to give Trump pause for thought – act in the long-term interests of the country.

More likely, there will be a point at which political self-interest trumps Trump. Republicans seeking to hold onto seats in 2020 in districts won by Hilary Clinton in 2016, or in which the Democratic Party was resurgent in last year’s midterms, may well peel away from Trump if his already soft approval rating continues to slide. There are already signs that some establishment figures are putting daylight between themselves and the president, and as the Republican convention and the 2020 presidential election move into view, more may choose to follow suit.

Under these scenarios, Republicans may take a closer interest in restraining Trump than they have done so far. Seriously spooked Republicans may prove more amenable to the notion of impeaching the president. And because a president cannot dissolve Congress, Trump would be unable to get in a preemptive strike should the House move to impeach him.

None of this may come to pass. Trump may well be on the defensive right now but his chances of being re-elected in 2020 will be seriously (and perhaps fatally) compromised if he backs down on the wall issue again when congressional negotiations on immigration and border security wrap up on February 15. During the two years of his administration he has proved perfectly happy to plough on regardless of public or political sentiment for far less significant issues. It is conceivable that he will do so again.

He has also demonstrated that he chafes against constraints on presidential agency, wishes to expand the reach of the executive branch and responds badly to criticism. In short, he is a poor fit for a liberal democracy but potentially a rather good one for an autocracy.