The foreign policy community met with relief the announcement Morrison’s first overseas trip for 2019 would be to Vanuatu and Fiji. The trip is a long overdue symbol of a priority outlined in the 2017 Foreign Policy White Paper: “stepping up our engagement in the Pacific”.

engage with the Pacific with greater intensity and ambition, deliver more integrated and innovative policy and make further, substantial long-term investments in the region’s development.

Although Vanuatu’s prime minister, Charlot Salwai, visited Australia last year, Morrison’s trip to Port Vila on Wednesday is the first by an Australian PM since Bob Hawke in 1990.

The trip had a strong defence focus, with Morrison saying Australia’s contribution to Vanuatu’s police and security will ensure “the stability of our region”. He is also reportedly negotiating a bilateral security agreement. This represents a deeper militarisation of Australia’s Pacific foreign policy.

Morrison’s aims to formalise security relations are an attempt to gain influence in the face of China’s rising competition. Australia’s undiplomatic and somewhat hysterical response to rumours of a Chinese military base being built in Vanuatu in 2018 highlights Canberra’s sensitivity to “foreign” intervention in the South Pacific.

Although Vanuatu was quick to deny the rumours, debate in Australia raged over the geopolitical implications, with some commentators saying a strike could be launched from the base to Australia.

The government’s recent pattern of providing support for PNG’s Manus Island naval base, Fiji’s Black Rock Base, or new Patrol Boats to 12 Pacific Island nations, is part of a tectonic shift that has occurred in foreign policy toward the Pacific.

Australia’s focus is security, concentrating on external threats and the possibility of internal instability. The Pacific’s concern, however, is sustainable development and climate change, which Australia seems to ignore.

The question is whether Canberra will simply continue framing the Pacific through the lens of Australian policy priorities or focus on what the Pacific wants.

Australia already has significant defence relations with the other Pacific Island military nations – PNG and Fiji. Canberra has a longstanding defence cooperation relationship with PNG and this trip will likely lead to greater defence cooperation with Fiji – especially as Australia beat China in the bid to build the Black Rock Base.

And in 2017, under then Foreign Minister Julie Bishop, Australia negotiated a bilateral security treaty with the Solomon Islands security cooperation agreement. This agreement allows Australian police personnel to deploy rapidly to Solomon Islands (with the consent of both countries) if there is a threat, which includes natural disasters.

With regards to Vanuatu, Australia is already its main development assistance partner. And Australia’s trading and investment relationship with Vanuatu is as significant as is possible with a small island nation of 285,000 people. And out of the Pacific nations and Timor Leste, Vanuatu has the larger number of workers in Australia and New Zealand as part of the Seasonal Worker Program.

In the 1980s Australia gave Vanuatu a patrol boat to police its exclusive economic zone (EEZ) and will give a modern advanced vessel as part of the Pacific Maritime Security Program. This program, detailed in the 2016 Defence White Paper, is a A$2 billion commitment to the region over 30 years, and seeks to support regional countries in defending their maritime boundaries from transnational crime and illegal fishing. 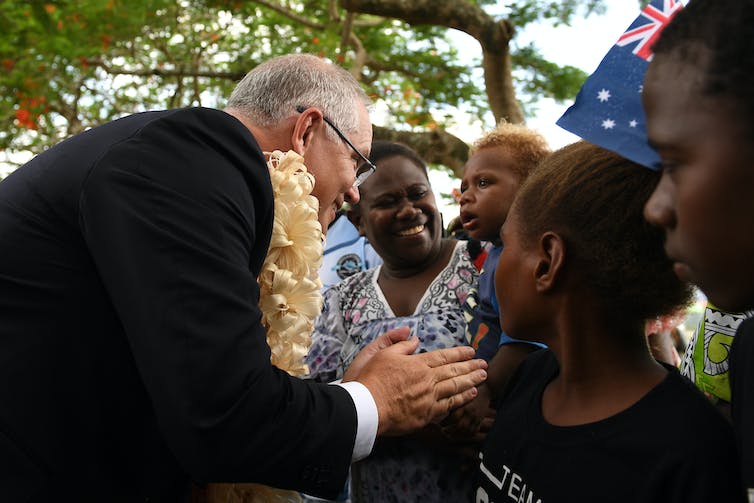 While the Pacific is focused on development, Australia’s priority is security. DAN HIMBRECHTS

The Australian Federal Police also has a longstanding training relationship with the Vanuatu Police through DFAT’s Policing and Justice Support Program. In 2018 it was announced that Australia would train 300 new recruits.

Despite all of this, the Morrison Government is reportedly placing increased security cooperation with Vanuatu high on the agenda. So, why now? Perhaps because Canberra’s Pacific “step up” has not all been plain sailing and relations with Vanuatu have been strained recently.

Australia at odds with the Pacific

In the past, Australia’s relations with the Pacific had been characterised by aid and development rather than security. Canberra remains the region’s number one aid donor. However, under successive Liberal governments, the aid budget has declined.

This has continued under the Morrison government and there is concern militarisation will draw funds away from development projects that more closely meet the interests of Pacific Island nations.

The other key plank in the government’s Pacific “step up” was the announcement of a infrastructure development bank. This multi-billion dollar initiative is short on detail but plans to provide loans for “high priority” infrastructure projects including telecommunications, energy, transport and water.

Read more: If there's one thing Pacific nations don't need, it's yet another infrastructure investment bank

The loans will be provided at concessional rates and the bank is aimed at countering Chinese influence. Australia has criticised China’s debt book diplomacy, so increasing the debt pool of Pacific countries seems at odds with these concerns.

Morrison’s Pacific pivot is in full swing. So far, the Infrastructure Bank raises more questions than it answers. The security focus of Morrison’s trip is likely to lead to more speculation about what Australia wants to give. If we want to build sustainable relationships, we should be listening closely to what Vanuatu wants to get from any security agreement.