Queensland Senator Fraser Anning has used taxpayer funds to pay for flights to Melbourne to attend a protest with far-right extremists.

Anning’s use of taxpayer money for what many argue to be inappropriate reasons is another in a line of Australian MPs using their parliamentary entitlements in ways that have riled the public.

Who can forget former Speaker Bronwyn Bishop’s helicopter ride to attend a party fundraiser, which in the end cost her the job.

Such incidents have fuelled a public perception parliamentary entitlements are excessively generous. Fraser Anning defended his attendance at the rally, saying: “It’s official business. I am a senator. I didn’t go there for a picnic.”

Ministers do need to travel to perform official duties relating to their portfolio. MPs have to represent their electorate, as well as perform their parliamentary duties in Canberra. Public funds should be provided to allow them to carry out their duties effectively and without impediment.

But some MPs have been accused of rorting the system with exorbitant or improper entitlements claims. So, what are parliamentarians entitled to claim?

Above their base salary, politicians can claim certain additional “entitlements”, which are better conceived of as work expenses and allowances.

The new parliamentary expenses framework is based on two main principles.

First, MPs are able to claim reasonable costs incurred for the dominant purpose of conducting parliamentary business. MPs must not seek to disguise as official business an activity whose dominant purpose is personal or commercial.

Secondly, the costs incurred must represent value for money.

Under current legislation, MPs can claim for domestic travel expenses, including the cost of commercial flights, cars and private vehicles for travel within Australia. With prime ministerial approval, ministers can also claim overseas travel costs, as well as the travel costs of their staff and spouse.

These entitlements are limited to travel relating to parliamentary or electorate duties, or party political duties connected with their membership of parliament.

Under “family reunion” benefits, MPs’ spouses and dependants may join them in Australia several times a year. 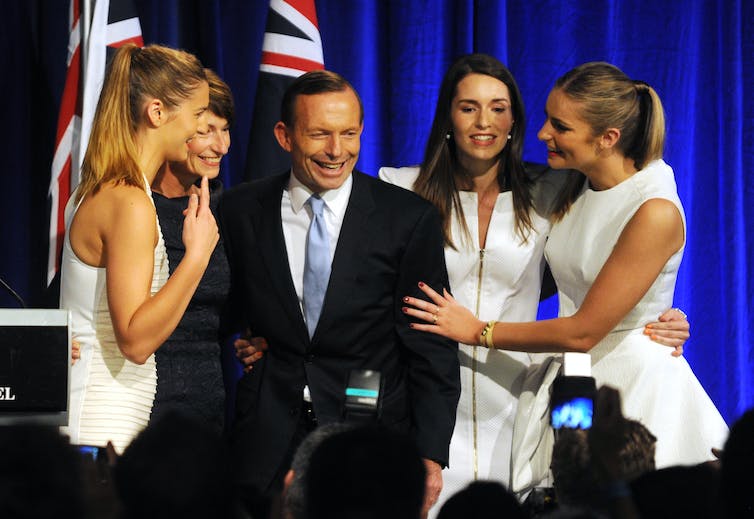 MPs can pay for family members to join them, up to a limit. DEAN LEWINS/AAP

MPs are also entitled to claim a travel allowance for each night they have to stay away from home for parliamentary business. But there is a ten night limit for party political duties outside Canberra and electorate duties outside the MP’s electorate.

What falls under the rules?

What doesn’t fall under the rules?

What about the grey areas?

It becomes murky when politicians have mixed motives in undertaking travel. For instance, former health minister Sussan Ley travelled to Queensland to make an announcement at a breast cancer clinic as part of her ministerial role. During her trip, she bought a A$795,000 apartment at an auction from a Liberal donor, which was said to be “neither planned nor anticipated”.

In such cases, politicians tend to argue their travel was for the dominant purpose of undertaking official business and their private affairs are incidental to this.

While such situations may comply with the rules, they tend to fail the so-called “pub test”. Although she didn’t break any rules, the public outcry led to Sussan Ley resigning from her role as the health, aged care and sport minister. Her statement read:

Whilst I have attempted at all times to be meticulous with rules and standards, I accept community annoyance, even anger, with politicians’ entitlements demands a response.

What happens when rules are breached?

So, is Fraser Anning’s trip to Melbourne for the weekend protests within the rules?

It depends on whether the trip was for the dominant purpose of parliamentary business. Anning’s electorate is in Queensland, which means there is less justification he was representing his electorate by travelling to Melbourne.

Anning’s argument was that Queensland was experiencing similar issues with crime gangs as Victoria.

However, attending a protest in Melbourne about purported Victorian crime issues would seem to have, at best, a tenuous connection with his duties of representing the Queensland electorate.

The Independent Parliamentary Expenses Authority can make a ruling on whether the claim was in accordance with the law. If the claim contravenes the law, the MP has to repay the money. Where the MP has not repaid their claim within 28 days, an additional 25% penalty may apply to the debt.

As holders of high elected office, MPs are the custodians of public trust. But some MPs have made claims from taxpayer funds that are out of step with public expectations. It is incumbent on the Independent Parliamentary Expenses Authority to carefully police such claims.