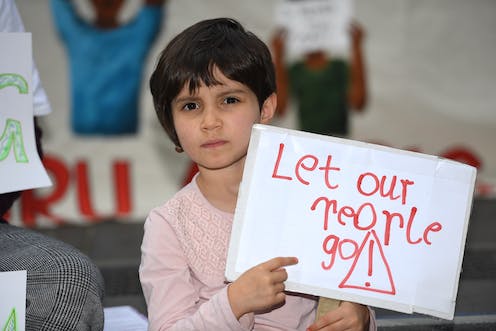 A young girl protesting at a rally to bring refugees on Nauru and Manus Island to Australia.AAP/Penny Stephens

Australia was one of 176 countries to vote in favour of the Global Compact on Refugees (refugee compact) in mid-November this year. The United Nations General Assembly will adopt it by the end of 2018.

However, Australia did not join the Glo...

Australia was one of 176 countries to vote in favour of the Global Compact on Refugees (refugee compact) in mid-November this year. The United Nations General Assembly will adopt it by the end of 2018.

However, Australia did not join the Global Compact for Safe, Orderly and Regular Migration (migration compact) at a conference in Morocco on December 10-11.

What are the compacts and what do they aim to do?

There is much confusion about the two compacts, with commentators often conflating the two documents. However, they are distinct agreements with differing subjects.

The term “refugee” used in the refugee compact has a specific meaning under international law. It refers to a person outside their own country who fears persecution because of their race, nationality, membership of a particular social group or political opinion.

As a signatory to the Refugee Convention and Refugee Protocol, Australia has particular obligations to refugees under these two treaties. The refugee compact does not replace these obligations. Instead, it is a non-binding agreement that “intends to provide a basis for predictable and equitable burden- and responsibility-sharing”.

The Refugee Compact lists four objectives. They are to:

The migration compact does not create any new binding legal obligations on states such as Australia. Instead, it has a range of 23 objectives for safe, orderly and regular migration. These include the collection and better use of data on migration; strengthening responses to smuggling and trafficking; eliminating discrimination; using detention as a last resort; saving lives; managing borders in an integrated, secure and coordinated manner; addressing and reducing vulnerabilities in migration; and strengthening international cooperation.

Where did the compacts come from?

The two compacts have emerged from a need for the international community to better cooperate and respond to unprecedented numbers of people on the move, particularly into Europe. This includes refugees fleeing persecution from conflicts such as Syria.

In September 2016, the United Nations General Assembly unanimously adopted the New York Declaration for Refugee and Migrants to address such concerns. The declaration contained a commitment to begin two separate tracks of negotiations: the refugee compact and the migration compact.

Australia has been relatively silent on the refugee compact, but has objected to the migration compact on the grounds that it would compromise Australia’s sovereignty.

The migration compact has also been accused of failing to:

adequately distinguish between people who enter Australia illegally and those who come to Australia the right way.

In addition, Australia has cited its success with migration as a reason for its refusal to adopt the migration compact. It has stated:

when we are asked to sign up to international agreements that we believe will compromise our successful way of doing things, we will pass.

The criticisms regarding the threat to Australia’s sovereignty and the lack of distinction between categories of migrants is surprising. As has been explained by Goodwin-Gill and McAdam, it is a misrepresentation of the document.

As with the refugee compact, the migration compact does not create any binding legal obligations on states. It affirms that “within their sovereign jurisdiction, States may distinguish between regular and irregular migration status”.

Furthermore, irrespective of whether Australia signs the migration compact, it is obliged to protect the human rights of migrants under existing international law. This includes, for example, the obligation to refrain from arbitrary detention. Thus the illegality of arbitrary detention, including on Nauru and Manus Island, under international law will not change whether Australia signs the migration compact or not.

Why has Australia signed the refugee compact but not the migration compact?

The United States is the only country to vote against the Refugee Compact. In contrast, the United States, Australia, the Netherlands, Austria, Bulgaria, Hungary, Czech Republic, Poland, Dominican Republic, Chile, Latvia, Slovakia, Estonia and Italy either withdrew from the migration compact negotiations or expressed reservations, often citing concerns about sovereignty as the reason.

But rather than being a real threat to sovereignty, the migration compact appears to have taken on a symbolic meaning that the refugee compact has not. Its opponents are governments with strong anti-immigration and asylum seeker policies. For such states, the migration compact has become a convenient strawman against which states can demonstrate a show of power and resistance to serve domestic political interests. 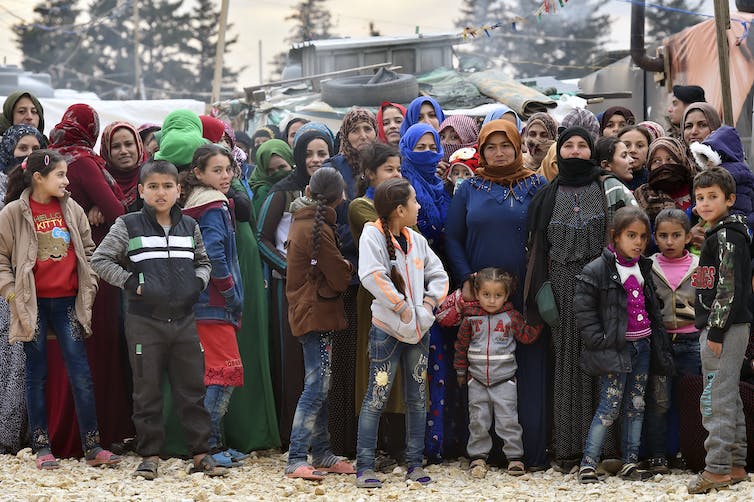 Syrian refugees at a camp at Haouch El Nabi in the Bekaa valley, Lebanon. AAP/EPA/Wael Hamzeh

A reason why the migration compact has been used as a foil in this way may simply be in the timing. The United States has led the rejection of the migration compact. It was early to withdraw from the process. In contrast, it continued to support the refugee compact until close to the last minute.

However, adopting any hypothetical additional binding legal obligations will be a choice that governments can make in the future. Signing the migration compact does not bring an obligation to sign any future binding agreements.

This may be true, and is an issue that has been addressed in part in the latest version of the refugee compact, which calls for indicators that will track progress by states. But again, the non-binding nature of the agreements means that states do not have to do anything they do not wish to do.

As the opening lines of the New York Declaration attest:

since earliest times, humanity has been on the move.

Rejecting international cooperation cannot and will not stop people from fleeing danger, migrating for better economic opportunities or moving to be with loved ones.

However, without international cooperation the system is uneven, dangerous and unsustainable. The migration and refugee compacts are not perfect. But they offer countries the opportunity to do better for themselves, for those on the move and for the international community as a whole.