This article is in the series This is research, where we ask academics to share and discuss open access articles that reveal important aspects of science. Today’s piece explains how clinical trials assess drug effectiveness.

Ear infections, or “otitis media”, can cause of a lot of pain and discomfort in youngsters. In some children, persistent infections result in hearing loss.

But what sort of treatment should these children have, and how can doctors work out what is actually effective?

Here’s where a type of research called a clinical trial is useful.

Let’s take a look at the “OSTRICH” clinical trial, which investigated the impact of a short course of oral steroids (prednisolone) in children with persistent ear infection leading to fluid build-up in the ear, and hearing loss.

What is a clinical trial?

Clinical trials are the favoured type of study for showing cause and effect. They sit near the top of the study pecking order, only outdone in importance by summaries of lots of clinical trials put together.

Clinical trials can assess impact of a medication on a disease or condition. Researchers generally test a particular treatment, and compare the outcome to a different treatment or no treatment (if it’s ethical to do so).

The ideal design is one when the researchers and participants do not know who is assigned to the different treatments being tested. This is referred to as blinding.

Blinding may not always be possible. In food trials for example (where we do most of our work), it is very hard to blind a participant from a food they need to eat. Measures can be taken to minimise the impact of this, though.

The OSTRICH trial used an approach where they tested a real medication, in this case a steroid, and compared it to a treatment that was almost the same but without the active ingredient – called a placebo.

The researchers worked with 389 children aged two to eight years with ear infection symptoms, fluid build up for at least three months, and with confirmed hearing loss in both ears. Two hundred kids were allocated to received oral steroids, and 189 to receive placebo for seven days.

With this approach they recorded the impact of the treatments on the ear canal and middle ear, and also conducted clinical tests for hearing. The parents kept a diary of symptoms, and completed questionnaires.

The children were followed up five weeks weeks, six months and 12 months after completion of the treatment. The primary outcome for the trial was acceptable hearing confirmed by an audiometry test at five weeks.

Both the families and the researchers did not know who had the real medication until the study was finished – this is called double blinding. This time period meant that researchers had to be careful with the information they collected to avoid potential errors.

Even with the best laid plans, children are hard to predict. As well as looking at the effect of a medication on a disease, the number of study participants who follow all instructions and finish the study as per the plan is an important outcome.

Not all of the starting 389 kids finished the full 12 months of the OSTRICH trial, and this was due to a variety of reasons. Some families withdrew consent to take part, some children didn’t meet the hearing loss criteria at the outset, and some families couldn’t be contacted as time moved on. Some children didn’t always take their medication. This won’t surprise you if you have ever needed to give a child medicine – of any sort. 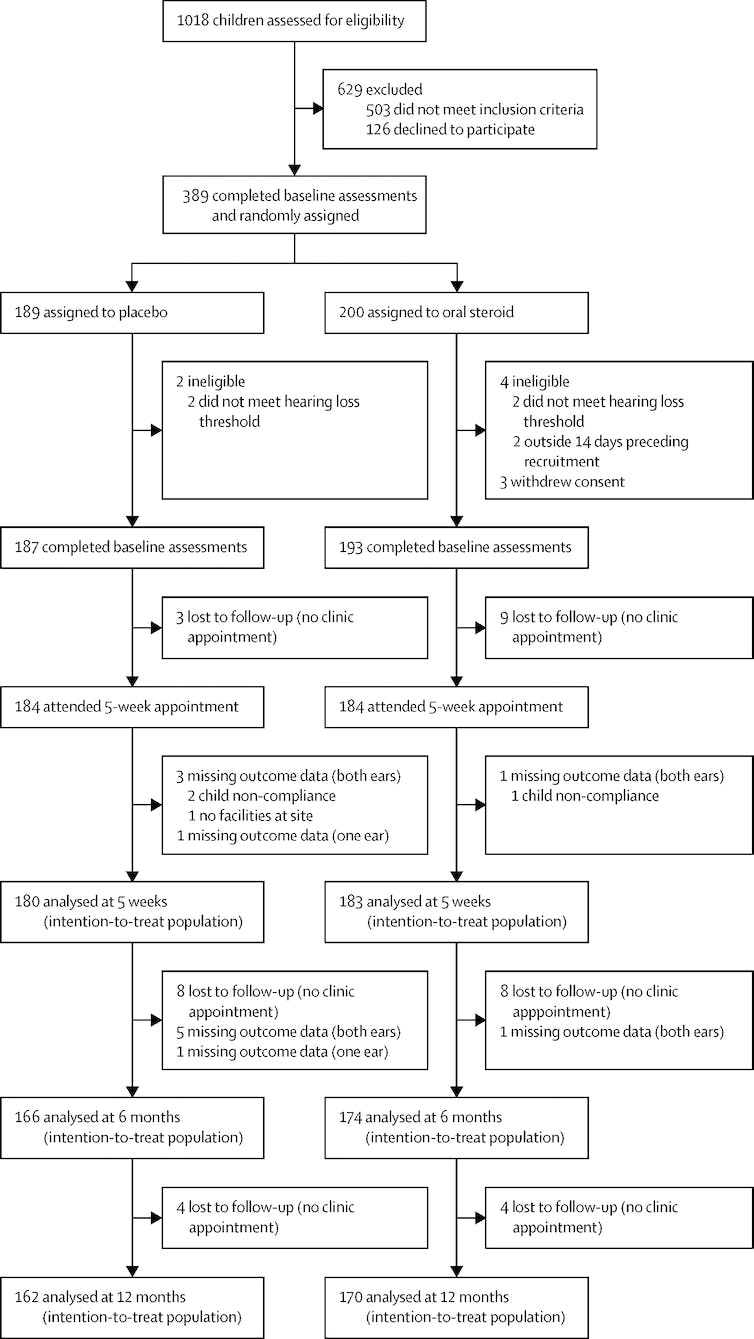 A short course of oral prednisolone is not an effective treatment for most children aged 2–8 years with persistent otitis media with effusion, but is well tolerated. One in 14 children might achieve improved hearing but not quality of life.

What didn’t they find?

Clinical trials can only make conclusions regarding the effect of what they are testing on the group they have tested it with.

This study quite simply shows that in children aged two to eight, a one-week course of oral steroids has minimal impact on hearing loss in children who had hearing loss due to ear infection and fluid build up, and assessed five weeks after the treatment started.

The study authors can’t conclude that this same finding will apply to children outside of the two- to eight-year age group, or to other types of medications, or steroids given for different time periods.

The researchers commented at the end of their study report that perhaps a clinical trial of oral steroids plus antibiotics is required for children with infection and hearing loss in this age group.

The open access research paper for this analysis is Oral steroids for resolution of otitis media with effusion in children (OSTRICH): a double-blinded, placebo-controlled randomised trial.