The optically guided bus is the latest in a long line of initiatives to repackage the bus as premium rail-derived technology. The name “trackless trams”, the vehicle design, and the modest deployment costs all have broad appeal. The concept has gained traction in Australia, with prominent advocates including Professor Peter Newman.

Recognition of the role of upgraded buses and bus rapid transit is welcome. However, a certain level of dogma, fuelled by inflated claims about the technology and its potential, has taken hold.

This article aims to debunk some misconceptions.

Optical guidance systems date back to the late 1980s and have had limited commercial success since the early 2000s. We count just three applications: in the French city Rouen, Castellón in Spain, and Las Vegas in the United States.

The mechanically guided bus remains the most popular — including Adelaide’s O-Bahn-style kerb-guided bus — and, to a more limited extent, rail guidance systems. Magnetic and wire guidance technologies have also been trialled to deliver the same benefits — including precision docking, lane assist, reduced road footprint and better ride quality — but at lower cost than physically guided systems due to the absence of continuous guidance infrastructure.

The systems in Rouen, Castellón and Las Vegas all use the French-developed Visée (later renamed Optiguide) “self-steering” optical guidance system.

This technology uses a roof-mounted camera to detect a “virtual rail” — twin dashed lines painted on a darker road surface. An on-board computer combines the image with the speed, yaw and wheel angle of the bus to determine the path to be followed and steers the vehicle.

In partnership with Renault, the Civis guided bus concept was developed into a transport system using Irisbus Agora articulated buses fitted with the optical guidance system.

The system is more like light rail than its predecessors. The vehicles are larger (2.65m wide by 3.4m high) and can be made longer or shorter by adding or removing sections.

The electric vehicles use supercapacitor batteries mounted on the roof and charged at stations via an electric “umbrella”. Supercapacitor technology is not new, having been used in Shanghai, Nanjing, Guangzhou and Ningbo over the past decade.

CRRT unveiled its hybrid rapid transit vehicle in the Chinese city of Zhuzhou in June 2017.

A major advantage of the CRRC system is its multi-axle hydraulic steering technology and bogie-like wheel arrangement, which has less overhang and thus requires less swept path clearance in turns. Each section of the 32m vehicle is around 10.5m long and the minimum turning radius is 15m.

According to CRRC, the cost of deployment is between US$7 million and US$15 million per kilometre. That’s much less than the US$20 million to US$30 million for light rail, and US$70 million to US$150 million for metro. Each vehicle has a capital cost of about US$2.2 million. 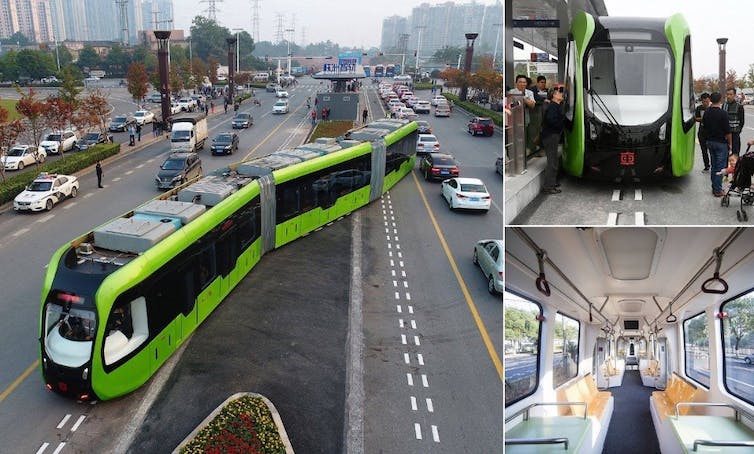 CRRC optically guided bus in Zhuzhou, China, a 3.2km system inaugurated in May 2018.

This is true up to a point. It has as much to do with traction technology, route alignment and driver behaviour as with optical guidance. Ride quality is a direct result of rubber versus steel traction. The track gauge and axle loads also determine ride quality on a railway.

Another important factor is the alignment geometry. Light rail can handle only 4-6% gradients. Rubber-tyred traction can manage up to 9%. A higher-quality bus corridor with smoother gradients and curves will offer better ride quality.

Pavement quality is also important. We see an example of this in Melbourne’s Albert Park, where roads are built with high-specification concrete for the Australian Grand Prix.

The optically guided bus offers a much smoother ride, but this is mainly due to its advanced automation.

Existing buses can be “jerky”. This has a lot to do with buses getting more powerful (and lighter) over the years. An average bus engine generated 230 horsepower 20 years ago. Today this can be up to 330hp — that’s good for uphill climbs but also allows the driver to accelerate faster.

One suggestion is to apply an acceleration limiter. The need for harsh braking is also an issue, but this is related to the level of priority given to buses in traffic — such as at signals and in congested lanes — as well as driver training.

The potential success of the technology is not related to whether the buses are optically guided or not, nor to any of the characteristics described above.

The sleek, rail-like appearance of these vehicles is certainly part of their appeal. Optically guided buses could challenge the idea that “buses are boring, and trains are sexy” and what we at ITLS describe as choice versus blind commitment in the bus and rail debate. Rather than being emotionally fixated on technology, we should choose the mode best suited to a particular transport requirement.

Operating on the road, right of way remains the critical factor. What good is a “trackless tram” if it gets stuck in traffic? In car-dominated Australia, governments have struggled to reallocate road space away from inefficient private cars (which average just 1.1 people per vehicle for work commutes) to spatially efficient mass transit.

Bus priority typically arises from road widening, rather than any redesignation of road space. As long as this mentality holds, we will struggle to improve travel time by bus compared with car — which is the most important element for attracting users onto public transport.

If “trackless trams” can radically alter the political paradigm and garner community support for the sensible reallocation of road space and signal priority, that creates a huge opportunity for cost-effective deployment of high-quality mass transit.

ITLS research has shown there is huge latent demand for public transport in the middle and outer suburbs of Australian capitals. The latest bus technology can be readily deployed along cross-town and orbital corridors now serviced by, for example, Metrobus in Sydney and SmartBus in Melbourne.

Time will tell whether “trackless trams” can shift the conversation from the idea of permanent, fixed infrastructure synonymous with rail to the pressing issues of right-of-way quality and public transport priority.