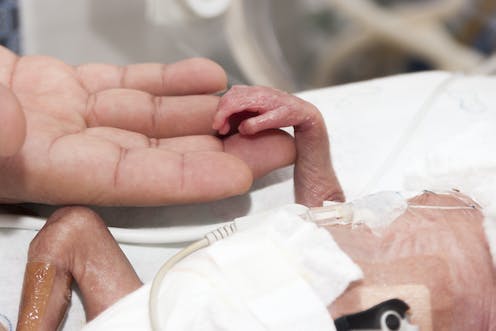 Scientists have become increasingly adept at creating brain organoids – which are essentially miniature human brains grown in the laboratory from stem cells.

Although brain organoid research might seem outlandish, it serves an important moral purpose. Among other benefits, it promises to help us understand early brain development and neurodevelopmental disorders such as microcephaly, autism and schizophrenia.

But brain organoid research also raises serious ethical questions. The main concern is that brain organoids could one day attain consciousness – an issue that has just been brought to the fore by a new scientific breakthrough.

Researchers from the University of California, San Diego, recently published the creation of brain organoids that spontaneously produce brain waves resembling those found in premature infants. Although this electrical activity does not necessarily mean these organoids are conscious, it does show that we need to think through the ethics sooner rather than later.

Read more: Take it from me: neuroscience is advancing, but we're a long way off head transplants

Stem cell research is already subject to careful regulation. However, existing regulatory frameworks have not yet caught up with the unique set of ethical concerns associated with brain organoids.

Guidelines like the National Health and Medical Research Council’s National Statement on Ethical Conduct in Human Research protect the interests of those who donate human biological material to research (and also address a host of other issues). But they do not consider whether brain organoids themselves could acquire morally relevant interests.

This gap has not gone unnoticed. A growing number of commentators argue that brain organoid research should face restrictions beyond those that apply to stem cell research more generally. Unfortunately, little progress has been made on identifying what form these restrictions should take.

But not all conscious beings have equal moral status.

The highest level of moral status is reserved for “persons”. Personhood is generally thought to require complex cognitive capacities such as autonomy, moral agency, or sophisticated forms of self-awareness.

Conscious brain organoids would almost certainly lack the relevant capacities. However, as conscious beings, their interests still matter. As the first animal liberationist, Jeremy Bentham, put it in the 18th century:

Here, then, is an important threshold. We should restrict the kinds of research that can be conducted with conscious (but not non-conscious) brain organoids. We should ensure the interests of conscious brain organoids are taken into account. For example, we should require that researchers both show why the research cannot be conducted using non-conscious organoids, and that they actively minimise their pain and suffering.

We also need some means of screening for consciousness. One option is to restrict research with brain organoids that resemble the brains of fetuses beyond 20 weeks’ gestational age – the earliest estimate for when consciousness develops in human beings.

Another option is to directly measure brain processes associated with consciousness. We should resolve uncertainty by erring on the side of consciousness; it would typically be less bad to treat a non-conscious brain organoid as if it is conscious than to make the opposite mistake.

One category of research raises additional moral concerns: research in which organoids can interact with the outside environment.

Researchers are beginning to connect brain organoids to robotic bodies and implant brain organoids into the brains of nonhuman animals. It is not far fetched to think such beings could develop a richer mental life than organoids that are confined to cell culture.

We should screen such beings for unexpected cognitive capacities, try to understand what constitutes a good life for these beings – and treat them accordingly. We should not assume they are some kind of “biological machine”.

We should also consider their degree of moral status. If these organoids develop sophisticated cognitive capacities beyond mere consciousness – if, for example, they display forms of self-awareness – we might want to attach extra weight to their interests, or even rule out harmful experimentation altogether.

We might not know whether particular brain organoids possess particular cognitive capacities. In such cases, we risk perpetrating serious moral wrongs if we under-estimate their mental sophistication. Accordingly, we should err on the side of over-estimating rather than under-estimating moral status.

This is just a rough outline of one possible regulatory framework. There is room for further conversation on how we should treat organoids that possess consciousness, self-awareness, or other cognitive capacities.

However, with the prospect of conscious brain organoids looming on the horizon, we need to begin having this conversation now.

Science is creating new living matter. With power comes responsibility and what matters is an ethical question, not a scientific one.