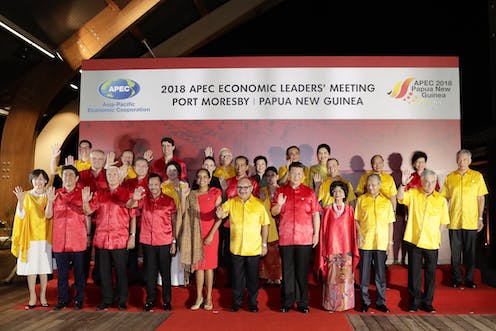 Port Moresby may not be Yalta, nor, it might be said, is it Potsdam. But for a moment at the weekend the steamy out-of-the-way Papua New Guinea capital found itself at the intersection of great power combustibility.

When this latest chapter in America’s relationship with China is written, the Asia-Pacific Economic Cooperation (APEC) forum in Port Moresby in November 2018 may well come to be regarded as a moment when Washington exposed its determination to reassert itself in the region.

The failure of APEC leaders for the first time in the organisation’s history since 1993 to agree on a final communique, due to a standoff on trade between the United States and China, points to more trouble ahead.

Unless frictions on trade and other issues are eased over the coming months, Washington and Beijing will have embarked on a course that threatens to destabilise the whole region.

These are significant moments in the evolution of a fractious relationship between an established and a rising power.

The US has long wrestled with a workable approach to an ascendant China. It has oscillated between a hedging strategy, elements of containment, and a process of engagement.

None of these approaches has gelled.

Now, it appears to be moving towards a policy of strategic competition and economic confrontation. This is a combustible formula.

Competing worldviews were on show in Port Moresby as leaders of the two countries put aside diplomatic niceties.

US Vice President Mike Pence’s declaration that the US would not “change course” in its trade dispute with China until that country “changes its ways” could hardly have been more provocative.

China’s leader, Xi Jinping, took a swipe at the US when he said countries that embraced protectionism were “doomed to failure”.

Failure to secure American and Chinese signatures to a leaders’ communique arose from differences over the need to reform the World Trade Organisation.

China dug its heels in on language that might have posed challenges to the role of state-owned enterprises, and also on the question of differential treatment of developed and developing countries.

China has long benefited under WTO rules from being regarded as a developing country.

Both Pence and Australian Prime Minister Scott Morrison warned loans to Pacific countries were being used as a “debt trap” to assert Chinese influence. Xi strongly rejected these assertions.

Whatever the upshot of these skirmishes, America’s posture in the Asia-Pacific has shifted to one in which it seems to be spoiling for a fight. Canberra should be wary.

The Barack Obama pivot to the Asia-Pacific ended up lacking substance and has been superseded by a combative Trump administration. Its approach has less to do with engagement than with confronting China’s regional ambitions.

The pressure point for regional competition lies in the South China Sea, where China is developing base facilities on disputed features. That strategic competition now extends to the southwest Pacific.

Pence’s announcement that the US would partner Australia and Papua New Guinea in the development of a naval base on Manus Island overlooking the Bismarck Sea is, arguably, the most significant American security initiative in the Asia-Pacific since the end of the Vietnam War. Pence said:

We will work with these nations to protect sovereignty and maritime rights of the Pacific Islands as well.

Thus, Beijing was put on notice that America would adopt a more forward-leaning posture in the Asia-Pacific. Where this leads is hard to predict, but what is certain is that trade and other tensions will have a security overlay.

American bases on the Korean Peninsula and in the Japanese archipelago will now stretch into the southwest Pacific. The Manus base will overlook maritime routes on Australia’s northern approaches.

From an Australian strategic perspective, this is a hugely significant development, and one that will test Canberra’s ability to balance its security relationship with the US and its commercial partnership with China.

Beijing will correctly view the Manus facility as a joint endeavour to neutralise China’s thrust into the southwest Pacific, where it has been cultivating micro-states as part of attempts to spread its power and influence across the region.

Belatedly, Canberra is responding to this Chinese assertiveness in its backyard by ramping up its diplomatic engagement, expanding its aid programs, and now partnering Papua New Guinea and the US in the development of a joint naval facility.

In the period ahead, Australian diplomacy towards China will need to be more nimble and subtle than it has been in the recent past.

Beijing will be watching.

Morrison was not understating the case when he said US involvement in the Lombrun base on Manus would elevate Australia’s relations with its ANZUS alliance partnership to a “new level”.

How this “new level” plays out will depend on careful management of relations with China by whatever government is in power.

A joint naval facility will inevitably make it more difficult to avoid being caught in an American slipstream in any confrontation with China.

Finally, in the lead-up to what is shaping as one of more important encounters between world leaders in years – the meeting between Xi Jinping and Donald Trump at the G20 in Buenos Aires this month – Australian policymakers would be advised to read Pence’s October 4 address to the Hudson Institute in Washington.

Read more: Australia and China push the 'reset' button on an important relationship

Assuming Pence’s speech represents an administration view, this should be regarded as a deeply antagonistic statement verging on a declaration of hostilities.

When it comes to Beijing’s malign influence and interference in American politics and policy, we will continue to expose it, no matter the form it takes.

We will work with leaders at every level of society to defend our national interest and most cherished goals.

Some viewed the Pence speech as the forerunner of a new cold war. That probably overstates the case, but it is also true that relations between Washington and Beijing have taken a turn for the worse.