A day of judgement is fast approaching for two now-elderly central figures in the Khmer Rouge regime of the 1970s. But part of the judgement due on Friday, a legal finding on genocide, also has the potential to unsettle understandings of the past in current-day Cambodia.

Those in the tribunal dock are Nuon Chea, 92, a man known as Brother Number Two (second in command to Pol Pot, who died in 1998) and Khieu Samphan, 87, the former head of state. The pair, the last survivors of the top Khmer Rouge leadership, are already serving life jail terms after being convicted of crimes against humanity at the same tribunal in 2014.

Khmer Rouge rule, which aimed to turn Cambodia into a back-to-basics, agrarian state, resulted in the deaths of an estimated 1.7 to 2.2 million Cambodians through execution, starvation and disease.

The Khmer Rouge were ousted in 1979 by anti-Khmer Rouge Cambodian “Renakse” forces that were supported by Vietnam. However, their role as liberators was lost on many outside Cambodia, and the new socialist nation was ostracised by Western nations and regional groupings such as ASEAN. 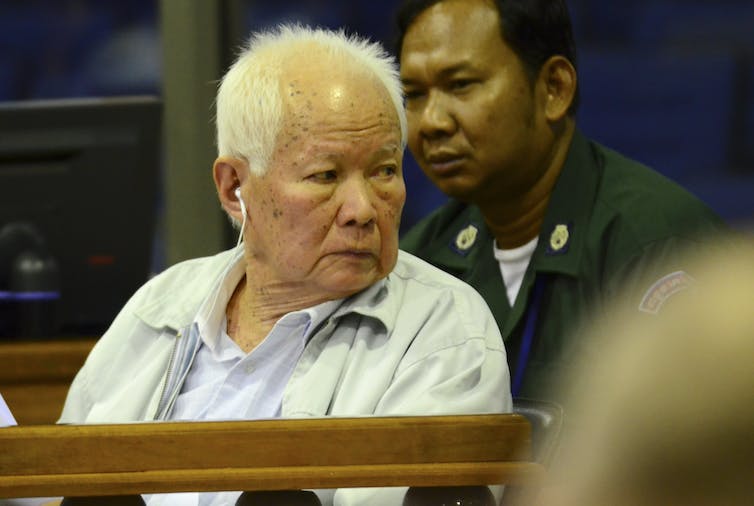 Khieu Samphan, one of two central figures in the dock over atrocities committed during the Khmer Rouge regime. Nhet Sok Heng/EPA

Sovannarom, 50, works as an interpreter and taxi driver in Phnom Penh. He lost his brother during the Khmer Rouge regime and while he is in favour of the United Nations-supported Khmer Rouge Tribunal, he wishes more people other than the former senior leaders of the Khmer Rouge were being put on trial.

University-graduate Rotanak, 32, was born after the regime but has closely monitored the tribunal’s progress. She is confident it will satisfy many demands for justice, but worried that the expectations of victims who have participated in the current case, known as Case 002/02, may not be fully met.

On Friday, the Khmer Rouge Tribunal (KRT), officially known as the Extraordinary Chambers in the Courts of Cambodia (ECCC), will issue a summary of its judgement in the second trial against the two former senior Khmer Rouge leaders, who stand accused of genocide, crimes against humanity, and war crimes. Whether or not the specific charge of genocide is upheld, many Cambodians may be surprised or confused by this part of the judgement given the legal complexities. In short, genocide in international law is more narrowly defined than the popular understanding of the concept.

The current case includes charges covering acts at work sites, cooperatives and security centres, as well as internal purges and the regulation of marriage. But these are being prosecuted as crimes against humanity and war crimes, not as genocide. The only charges of genocide in the case relate to crimes against two ethnic minorities in Cambodia, the Cham (a Muslim minority) and ethnic Vietnamese. 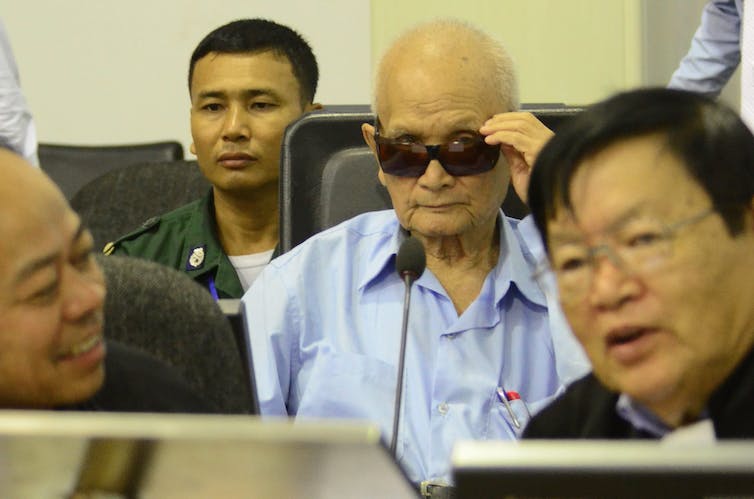 Under international law, genocide occurs where there has been a “special intent […] to destroy, in whole or in part, a national, ethnical, racial, or religious group, as such”. For the most part, there were no national, ethnic, racial, or religious distinctions between the victims and the alleged perpetrators. Thus, the experiences of suffering of the wider Cambodian population do not formally meet the legal criteria for genocide.

But references to genocide appeared soon after 1979 in expert and mass media accounts of Khmer Rouge rule of Cambodia. Most famously in the English-speaking world, journalist John Pilger’s articles and documentaries drew explicit parallels between the crimes of Hitler in mid-century Europe and those of Pol Pot in 1970s Cambodia: a genocide in which infamous security centre S-21 was a “Cambodian Auschwitz”.

Within Cambodia, one of the early priorities of the government that replaced the Khmer Rouge regime was to convene a tribunal. Only months after Phnom Penh was liberated, the People’s Revolutionary Tribunal found Khmer Rouge leaders Pol Pot and Ieng Sary (tried in absentia) guilty of genocide. Ieng Sary was also charged in the same case as Nuon Chea and Khieu Samphan but died in 2013. The 1979 tribunal proceedings were broadcast in Cambodia, helping to entrench a popular understanding of Khmer Rouge rule as genocidal.

The legacy of this trial is contested. Some authors argue that it was the first attempt globally to bring the specific charge of genocide. International opinion, however, was stacked against the new Phnom Penh government. In the wake of the Vietnam War, Western nations and groupings publicly opposed Vietnam’s actions in Cambodia, seen as an invasion and occupation. In addition to these Cold War complexities, there are those who argue the trial simply failed to meet due process standards.

But there is more to the wider contestation than Cold War politics or due process concerns. John Quigley, a young American expert in international law, was invited to Cambodia to address the 1979 tribunal. His opinion was, and remains, that genocide against the broader population did occur.

The problem with most legal interpretations of the Genocide Convention, he argues, is a confusion of intent and motive, the view that an actor “must proceed out of hatred for the target group”. But “a person who kills members of a group from which he is not distinguished by religion, nationality, or ethnicity, with intent to destroy at least a part of that group, would seem to commit the act of genocide as defined by the Genocide Convention”, he writes.

In contrast, Marcel Lemonde, in his capacity as Co-Investigating Judge at the ECCC has explained in an interview published in 2014:

To establish that a genocide occurred, a group needs to have been identified […] and that group cannot be the quasi entirety of the population – otherwise the notion no longer makes sense.

How to judge what happened in Cambodia from 1975 to 1979 thus goes to the heart of how genocide is defined and understood.

The finding in relation to genocide this Friday is thus likely to provoke debate and confusion. If genocide is not found, the two minority groups in question, and especially the civil parties (participating victims in the case) among them, will be bitterly disappointed. Yet, if genocide is found to have been committed against them, the exclusivity of the finding is likely to jar with understandings held by the majority ethnic Khmer population.

Read more: A scholar's journey to understand the needs of Pol Pot's survivors

The confusion is compounded by further complexity in relation to the status of ethnic Vietnamese in contemporary Cambodia. Ethnic Vietnamese in Cambodia are among the most precarious groups in the country, and have recently had new state measures applied against them.

How might a genocide ruling that foregrounds the experience of this group affect their current political status? In an increasingly xenophobic political climate, a genocide finding that appears to grant special status has the potential to be politicised with the aim of provoking hostility.

If genocide is not found, these groups and many other Cambodians will be left wondering why the legal reckoning does not accord with long standing popular discourse.

While the trials were intended to bring legal clarity into the debate about the Khmer Rouge crimes, confusion around the genocide ruling is likely to affect the ongoing legacies of this significant tribunal.

And after the dismissal of the charges against another suspect, it seems more likely this Friday’s judgement hearing will be the last of the trial chamber.