This is an article from Curious Kids, a series for children. The Conversation is asking kids to send in questions they’d like an expert to answer. All questions are welcome: find out how to enter at the bottom. You might also like the podcast Imagine This, a co-production between ABC KIDS listen and The Conversation, based on Curious Kids.

Why do people grow in certain sizes? - Audrey, age 6, Brisbane.

About 150 years ago, there was a very curious English person who asked the same question. His name was Sir Francis Galton.

One day, Sir Francis Galton looked at his friends. He saw that most of his taller friends had taller parents and most of his shorter friends had shorter parents. Francis Galton was one of the first scientists to do some tests to work out why this was the case. He published his findings in a book. Not all of his ideas were correct, though. Some of his ideas were actually very wrong. But he made a start on what we now call “genetics” or the science of genes. I’ll explain what that means.

Like parents and children, brothers are sisters are quite alike too.

Do you look like your brother or sister? Have you had grown-ups saying to you: “Oh, you look just like your mum (or dad)!”

The reason behind all this is a thing called DNA. That stands for “deoxyribonucleic acid”, but don’t worry, everyone just calls it DNA.

Humans have a special code, and it’s called DNA

Our eyes can’t read the code, but our bodies can. The code tells our body what to do and how to look. For example, it tells our hair to grow curly or straight, or to make our eyes brown or blue. But also, how much to grow and when to stop growing. Some people have instruction booklets with a code that tells their bodies to grow tall. Other people have a code that tells their body to grow to a smaller size.

Did you know that DNA code is unique for every person? That means there is nobody in the entire world with the same code as you – unless you have an identical twin brother or sister. 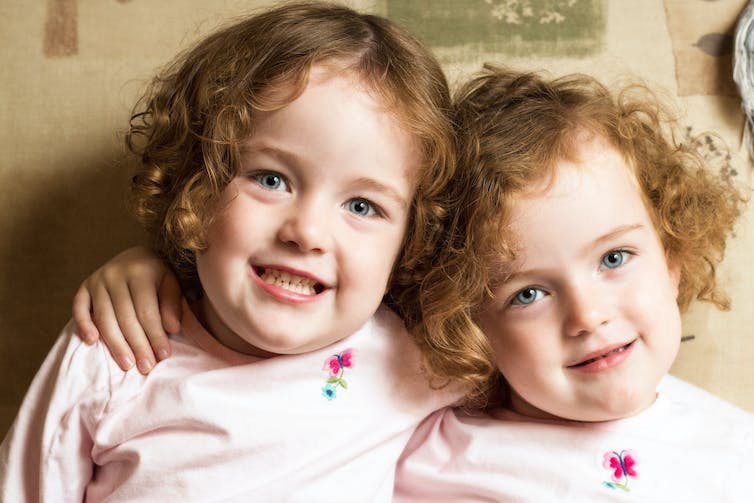 Only your identical twin has the same DNA as you. michaelross/flickr, CC BY

Read more: Curious Kids: How do we get allergic to food?

Even though our DNA code is very similar to our biological parents’ DNA code, we all still turn out a little bit different. This is because you have your own experiences.

Experiences are a part of being human

For our body to follow the code in our instructions booklets, it needs energy. Energy comes from eating food, and more importantly, eating healthy food. If we don’t eat, we won’t grow. Even if the code in our instruction booklets is telling our body to grow tall. Some children get to eat lots of food that makes them grow. Other children may not get enough food or don’t eat healthy food.

So, both your DNA code and your experiences make you grow to a certain size.

Read more: Curious Kids: Why do we have bones?